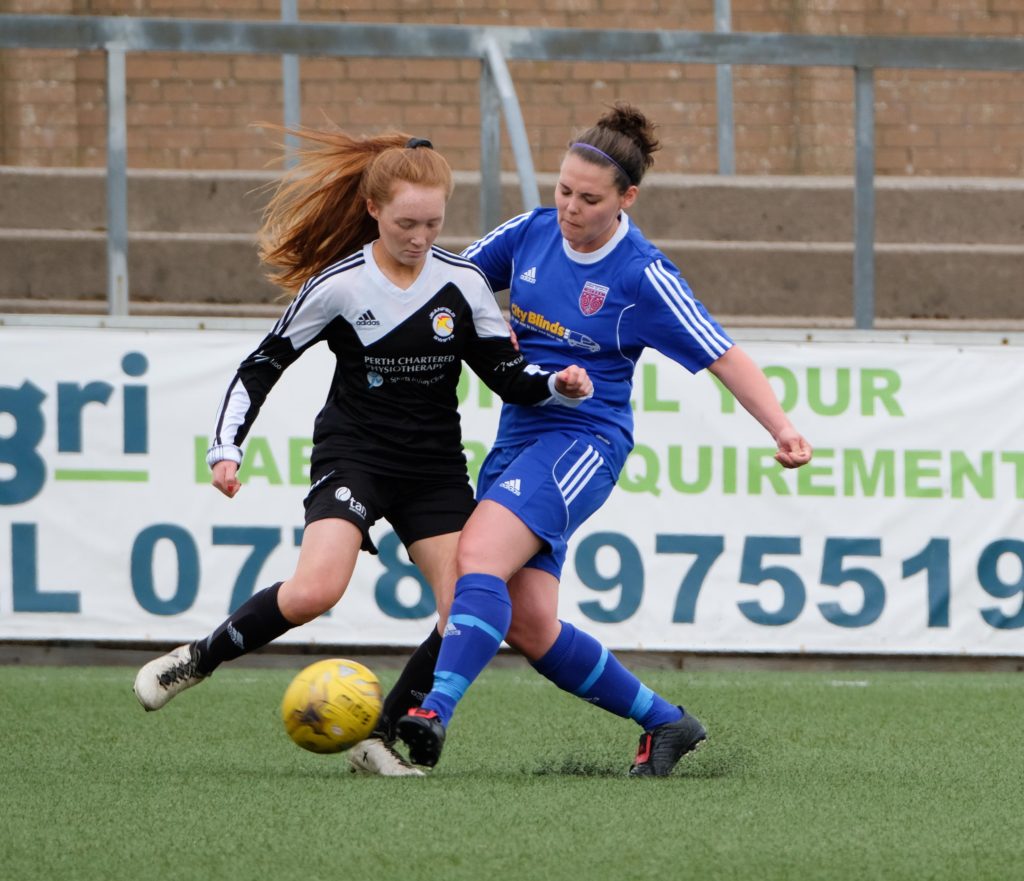 Sophie Milligan was delighted to make her way through ninety minutes at the weekend as she continues to regain match fitness and fight for a place in the Forfar Farmington squad.

The 25 year old defender has made just two competitive substitute appearances following a pre-season injury but praised her teammates for their current form in the Scottish Building Society Scottish Women’s Premier League One.

A Forfar Farmington XI defeated Jeanfield Swifts on Sunday with some of the main squad getting some valuable game time alongside St Johnstone players in the away ranks; Milligan felt it was a worthwhile exercise to regain her match sharpness.

“I’m definitely happy to get through a full game, you’re always wanting to start games and play as much as you can, so it was good to get the minutes under my belt. It was also pleasing to manage the whole game with no issues with my knee, so it is one less thing to worry about and just concentrate on my game.”

The side recently moved from second bottom up to fourth with three wins in a row and Milligan reckons things are now starting to click for the side following some good performances at the start of the season which produced no results.

She said: “The work rate was always there but we were just off the mark a bit at the start of the season, things have just really settled in place the last few games and the confidence and momentum in the squad is up again.”

As the team’s momentum built with the recent form, Milligan has had to settle for cameo appearances alongside others in the squad. While it may be frustrating for the defender not playing, she praised the current back line and reckons it’s all about the points at the end of the day.

“It’s frustrating to be unable to break into the side, but I also understand I’m just getting back to fitness and the girls have been solid at the back recently.”

“We’ve got the benefit of having a large squad of girls who are all more than capable of playing in the top league, so although players might not be playing as much as they’d like at times, you’d take the three points.”

“We are challenging for positions every night at training and it only betters the squad and the options we have to come off the bench and impact the game.

Farmington return to competitive action this Sunday against Celtic at K-Park and the centre back believes they can take confidence ahead of the tough clash.

“Without a doubt we can take confidence from the last month, it is high in the squad and we are starting to cut out the mistakes that in the past have cost us goals against the top teams, after competing so well for the majority of the game. So far this season the results in the league have shown that anyone is beatable on the day.”

Milligan is aware of the potential backlash from Celtic following their heavy 9-0 defeat to Hibernian in the SWPL Cup final but believes Farmington should concentrate on themselves rather than worry about the opponents.

“Obviously after a result like Sunday, Celtic will be wanting to come out and prove themselves, but we just need to concentrate on our own game.”