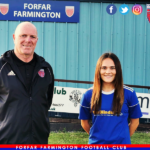 The club are delighted to announce the second signing this week of another Scotland U19’s squad player, local Monifieth girl Eirinn McCafferty.

Eirinn started her football career at a very young age with Monifieth FC where she captained the team. She received players player, managers player, most improved and goal of the season during her final few seasons there before signing for Dundee United. Eirinn continued winning trophies whilst with the tangerines where at the age of 15 she won Players Player of the year whilst the team won 2 leagues and the league cup.

Recognised for her outstanding talent Eirinn was selected for Scotland U19’s squad to go to Croatia at age 17 before taking up a scholarship in America at Queens University of Charlotte, North Carolina in 2018.

Forfar Farmington Head Coach Ryan McConville said, “we are delighted to sign another young talented local girl of the calibre of Eirinn McCafferty, as we look to compete at the highest level in Scottish Women’s football this year”.

The club are delighted to announce the signing of Scotland youth international Leah Fleming who returns to Farmington after a five year spell at St Johnstone.

A local girl, 18 year old Leah can play anywhere on the left hand side and is looking forward to testing herself in the SWPL1.

Her performances at Saints caught the eye of Scotland coach Pauline MacDonald and she made her debut for the SWNT u17s in Sept 2017 v Slovenia playing eight times up to March 2018 before gaining an u19 cap v Netherlands in March 2019.

We are delighted to be adding to our squad for 20/21 season return,

Kirsty Fraser, 21 year old defender who signs from Hamilton Academical after making 58 appearances for the club since joining from Glasgow City 3 years ago.

We wish the girls the best of luck while we look forward to start of season fixtures. 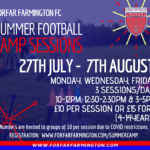 We are delighted to be able to offer these sessions for girls already part of the club or for those who would like to give football a try.

During what has been such an uncertain time for all, we have followed government guidance to allow us to reopen our facility as COVID secure, while we still have some restrictions in place.

See our schedule below and link to book your place, we are limited to 10 per group so numbers are limited. 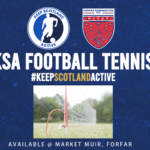 Looking for something to do in the holidays?

Keep Scotland Active are running Football Tennis, we are hosting a court at Market Muir from Mon 13th July, no access to clubhouse and open to the public, bring your own ball. Court available Monday-Thursday 10-4pm, to book visit….. https://www.keepscotlandactive.co.uk/football-tennis

Many thanks to all those who have completed our challenge, we reached Hampden and looking at the effort by many of you I think we could have made it back again! We have made a fantastic total of £2260 so far, the page will be available for the rest of the week closing on Friday 5th June. We will then distribute to 4 local charities, details will follow.‍👍💙⚽️🏃‍♀️🚶‍♀️🚴‍♀️

Please take the time to nominate a local charity so we can consider where all funds will go, we would like to donate to 4 different charities. Donations welcome to 31st May and are much appreciated during what is one of the most challenging times for everyone, many thanks to all those who have donated so far👍.

We so close now with only 12km to Hampden, finishing with a 7km tomorrow, we want to thank all those who have participated within the club and all those family members who have joined in and helped with the encouragement for our everyday 5k. Walking, running or cycling round their own local areas, its been great to keep everyone active and lovely to see your daily photos.

Our count down is on with just under 40km to Hampden, we have had great club activity with many of the girls, coaches and parents getting involved. Walking, running or cycling round their own local areas, clocking up the miles. Its been great to keep everyone active and lovely to see your daily photos.

Please take the time to nominate a local charity so we can consider where all funds will go, we would like to donate to 4 different charities. Donations welcome to 31st May and are much appreciated during what is one of the most challenging times for everyone, many thanks to all those who have donated so far👍. 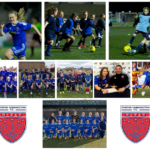 Your support is appreciated, we want to show our local community how much we care,

With all football suspended till further notice and to help maintain player fitness, we thought we could set a challenge for all FClub players, family members and background staff to raise much needed funds which will be donated to 4 local charities linked to the NHS and within our community. (Nominated by yourself, leave a comment)

The challenge is called the ‘FClub Road to Hampden’ where the distance of 157km from Forfar to our national stadium Hampden, is to be complete by each person/family group completing 5km each day for 30days with the 31st day being 7km. This can be done as a walk, run or cycle but can only be counted as 5km per day no matter how much over the 5km the person/family group do that day. This will all start on the 1st May and finish on the 31st May.

We encourage all your players and coaches to get on board. We want to see you all getting out for your daily exercise.

London arrives from Cove Rangers Women where she was young player of the year in 2019, scoring a number of goals in the SWF 1st Division

She has featured for Scotland Schools u15s making her debut in March 2019 and playing in the annual Bob Docherty tournament against the other home nations in Salou, Spain

She is also part of the North SFA regional u16 performance squad and attends the regional performance hub, an initiative set up in 2018 to develop players technically and academically with a view to helping players progress into future national squads

Head Coach Ryan McConville was understandably thrilled at the new arrival  “ I’m delighted to welcome London to the club. She comes with a growing reputation and is a fantastic young talent breaking into the world of Scottish women’s football. We are so pleased that she has chosen Farmington to help continue her development and she’s a great addition to our squad for the forthcoming season and beyond”

The club are thrilled to announce Irish international Lauren Brennan as our latest signing.

Lauren is a 25 year old striker who has played for Sion Swifts in Northern Ireland as well as playing pro for Grindavik in Iceland for two years before a spell in Australia was cut short with an ACL injury. She recovered from that setback and was back playing again for Sion.  Lauren made her international debut in 2015 against Switzerland in a euro qualifier.

Head Coach Ryan McConville is delighted to bring the attacker to Farmington, commenting “  I am delighted to get the quality of Lauren on board, having tried previously in my managerial career.  She is a striker of international pedigree and I have every belief that once she is back to full fitness after her injury, she will be a massive asset to both our club and for Northern Ireland”

As we gear up to the 2020 Season we will be announcing, over the next few days, all the players who have re-signed to the club. We caught up with our Head Coach, Ryan McConville at the weekend to get his thoughts;

“ Over the past few weeks we have made new signings that I hope will increase our standards both on and off the field, showing our ambition, as we fight to compete and give ourselves the best possible chance of doing well in the SWPL1

However I also want to go on record by saying how delighted I am at keeping our squad from last season together and I want to emphasise how important that has been.  In my eyes the current players have given me an opportunity to come into the Farmington family and have believed in what I am trying to implement here. We may be one of the “smaller” clubs in stature in the league but what I’ve noticed early on is we are big in heart and that is better, in my opinion, than a big money signing.

While we have added players to the squad, the reason has been, to hopefully push everyone on and bring the best out of all the players now here and that can only be good for our team and the club.  I want all the players to show me, their families, the committee, our supporters and the rest of the SWPL1, the qualities they have in their lockers and do themselves proud.

It wasn’t easy last season but the team got over the line, showed their pride and kept us in the top league – the previous management and players deserve massive credit for doing so.  Now is a new chance,  a new season with different values, different beliefs and  different standards and while it is early days, there is a sense of optimism around the club but I don’t want it to be the new manager syndrome and it only lasts short term.

Having secured all bar one of the players for this season says a lot and in a short space of time I feel I have connected well with the squad and we are slowly developing a relationship that will stand us in good stead for the 2020 season.  I want to provide the girls with the best tools possible and with the support of our coaches, and back room staff, including physio, sports psychologists and the committee, I feel the team can achieve our goals”