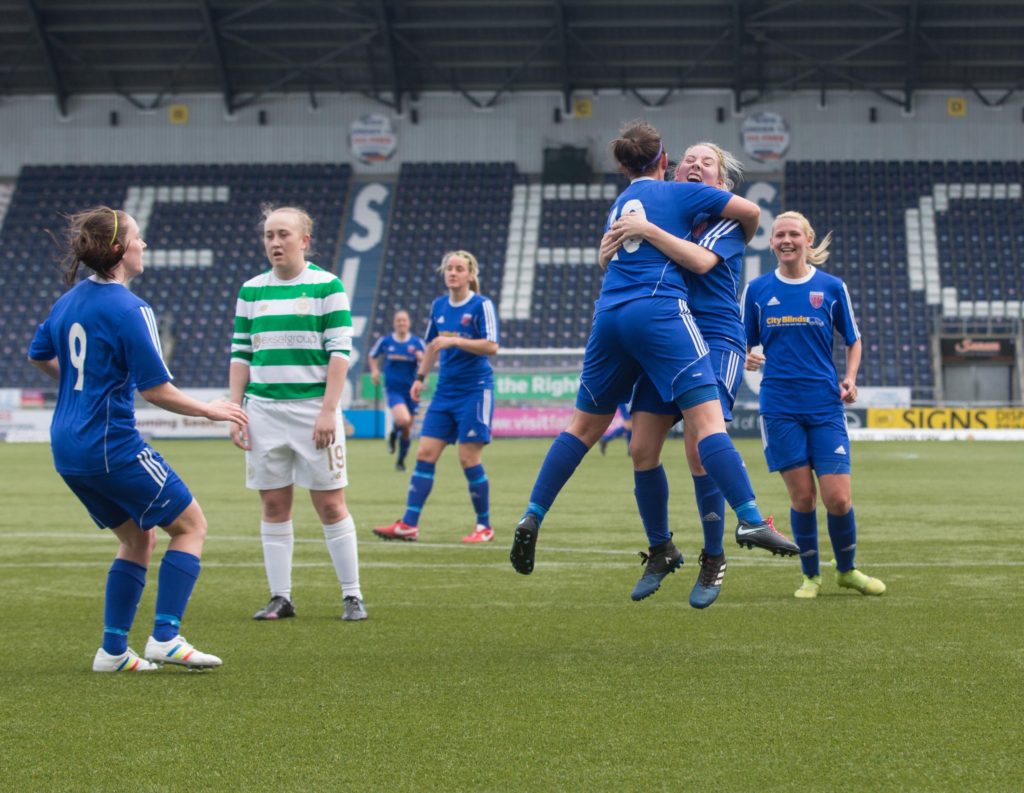 Forfar Farmington’s winning run came to an end on Sunday as Celtic defeated them by the odd goal in three at K-Park.

Despite going ahead through Nicola Davidson’s fantastic free kick, two efforts from the edge of the box by Natalie Ross and Colette Cavanagh either side of half time ensured all three points stayed with the hosts.

There was just one change made from the win over Spartans a fortnight ago as Beth McPherson made her first start, replacing Hannah Stewart as she returned to Glasgow City following the conclusion of her loan spell.

At an extremely hot K-Park the game got off to a tricky start for both sides, with chances few and far between early on. Sarah Ewens fired wide from the edge of the box as she had the only chance in the opening quarter of an hour.

In the sixteenth minute Claire Adams sent a weak effort into the arms of Fiona McNicoll, but just three minutes later Farmington were ahead at the other end through captain Nicola Davidson.

The free kick specialist stepped up 35 yards out and sent her set piece beyond the despairing Gibson for her third goal of the season.

Celtic looked to get back into the game and had further chances with Nicole Pullar blazing over when one on one before Natalie Ross and Ewens failed to trouble McNicoll.

Josephine Giard was denied by McNicoll when one on one with Kayleigh Brough doing well to get back and put her off.

The hosts levelled things up just a minute before the break when Ross curled into the top corner from the edge of the box.

Following the break, Celtic looked to take the lead and came close early on as Alana Bruce denied Ross on the line.

It wasn’t long however, until they did find the back of the net and it was left back Colette Cavanagh who did so, racing towards goal before striking the ball past McNicoll.

Farmington were now the ones looking for an equaliser as Caroline Heron saw her effort blocked just after the hour mark.

Action in the second half was hard to come by with both sides having to cope with the heat, Celtic did come close to adding to their tally with Ewens having a header held before Adams blasted past the post from distance.

In the 82nd minute Cavanagh saw her effort cleared off the line, although in the aftermath Pullar was forced off following lengthy treatment for an injury.

Deep into injury time Pullar’s replacement failed to find the target as she met a Keeva Keenan cross but it wasn’t to matter as Celtic took all three points.

Farmington will now look to regroup before Wednesday’s fixture against Stirling University at Ochilview.