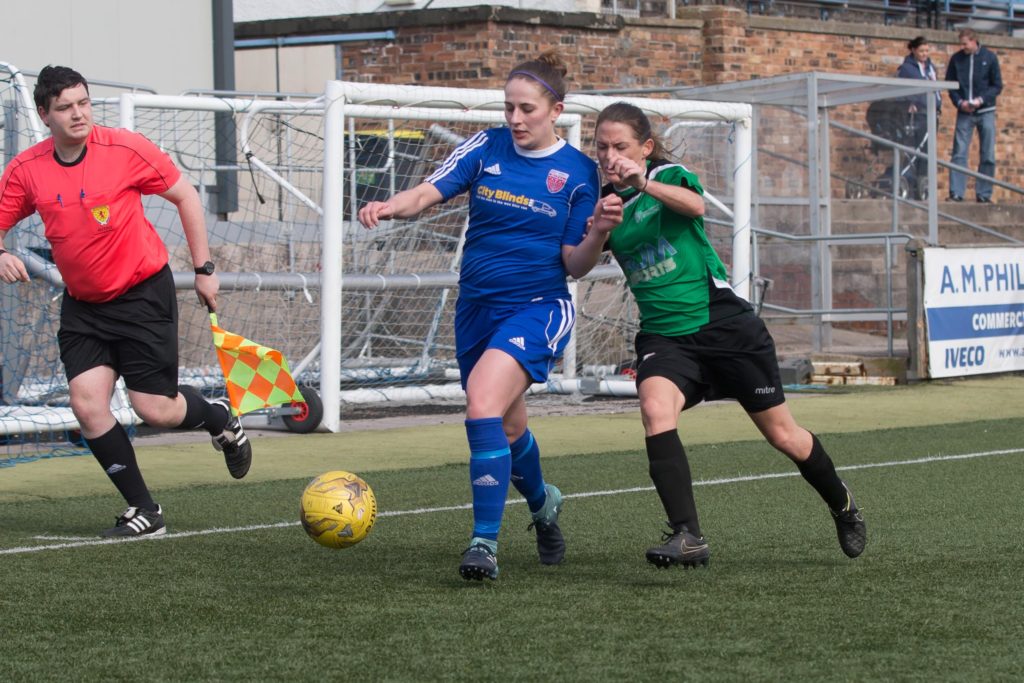 Forfar Farmington made it two wins in a row with a deserved 2-0 win over Stirling University on a very wet Wednesday evening at the University Playing Fields.

Second half goals from Danni McGinley and debutant Megan Robb gave Mark Nisbet’s side all three points to create a gap between themselves and the bottom three sides.

After Sunday’s win over Rangers, just one change was made as Alana Bruce replaced Erin Cattanach meanwhile Leah White was named on the bench in place of Gemma Collier.

Stirling had the first couple of chances early on as Beth McKay’s free kick was headed wide by Demi Falconer before McKay struck a low effort that Fiona McNicoll saved with ease.

The first shot for Farmington came after eleven minutes through Cheryl Kilcoyne when she fired over from long range.

Two minutes later Robyn Smith saw her corner nodded past the post by Caroline Heron as the side started to settle into the game.

Hannah Stewart could have broken the deadlock as a Smith free kick was flicked on by Heron but the winger’s shot was saved by Chloe Logan and the keeper was called into action shortly after when she tipped Nicola Davidson’s free kick over the bar.

Farmington had the best chance of the half eight minutes before the break; Smith saw a shot deflected wide and from the corner Cassie Cowper’s volley beat the keeper but was headed off the line, this fell to Nicola Davidson and her 25 yard effort hit a defender and flew past the post.

A minute before the break Stewart saw her shot blocked by a defender as both sides went in to half time level.

The second half started off well as Farmington took control of the game straight away; Danni McGinley firing wide just a minute after the restart.

Shortly after Heron nodded wide from a Davidson free kick before Stirling gifted Farmington a chance in the 57th minute.

A poor pass back saw McGinley race into a one on one situation, her effort was parried by Logan and Smith sent the ball back into the danger zone only for Logan to push Heron’s effort past the post.

The deadlock was broken in the 68th minute; Davidson’s free kick was headed down by Heron and McGinley stretched her leg out to divert the header past Logan for her second of the season.

Mark Nisbet had named a trialist in his squad once again and she came close to grabbing a second for the side two minutes after the opener as she saw her 20 yard effort held.

Stirling’s first chance of the half came in the 72nd minute when Eva Rule sent her effort past the post before McKay and Rebecca Galbraith failed to find the target ten minutes later.

Debutant Megan Robb made sure of all three points with six minutes remaining; a Farmington attack was cleared only as far as Alana Bruce and she swung a cross into the box for Robb to curl past Logan from just inside the box.

It was almost three as the game came to a close with Heron sending a glancing header wide before Davidson saw her 25 yard effort dip inches over the crossbar.

The result means that Farmington now have a four point gap between themselves and the bottom three and they could extend this on Sunday with a trip to the capital to face Spartans.