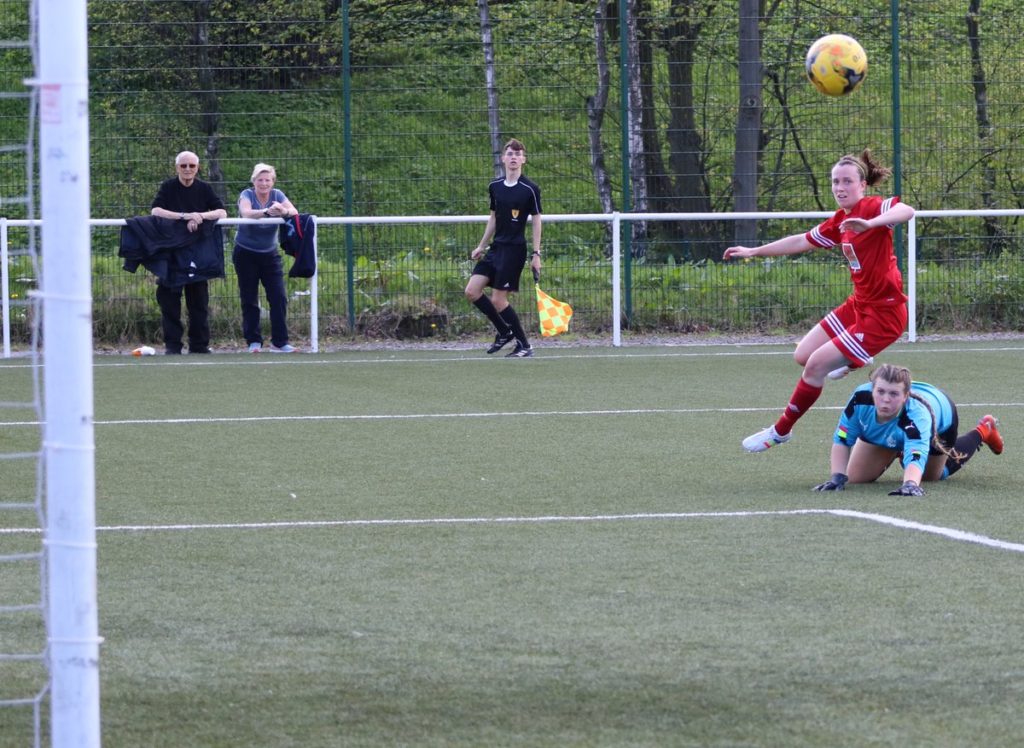 Forfar Farmington came away with an impressive win away to Rangers in the SBSSWPL1 with two late goals taking a slight shine off the final result.

Robyn Smith and Hannah Stewart had Farmington ahead at half time with Caroline Heron and Cassie Cowper making it 4-0 late on before Jade Gallon and Brogan Hay netted consolations for Rangers.

Mark Nisbet made one change from the League Cup semi final as Kirsty Deans was ruled out through injury, Hannah Stewart replacing her while two trialists were named on the bench.

Rangers started off well but failed to threaten Fiona McNicoll early on with Chantelle Brown and Hayley Sinclair missing the target in the first four minutes.

The deadlock was broken in the 18th minute; McNicoll emptied the ball up the park and the Rangers defence failed to head clear, allowing Robyn Smith in to slot home under the advancing Jade Baillie.

Jade Gallon headed wide from an Amy Muir corner shortly after for the hosts and Danni McGinley was unlucky not to add a second for Farmington in the 24th minute when a ball wasn’t dealt with and she nipped in only for Baillie to push her effort away.

Farmington did increase their advantage with ten minutes remaining of the half when Smith turned provider, sending a corner in for Hannah Stewart to open her account for the club.

Sinclair fired over from the edge of the box as Rangers looked for a quick response but Farmington held firm and went in to the break two goals to the good.

Rangers came close to pulling a goal back a minute after the break as McNicoll used her feet to deny Brogan Hay, however they were made to rue that miss in the 51st minute.

McGinley won the ball in the middle of the half before laying it off for Heron, she took a touch before sending an amazing finish beyond Baillie from 35 yards.

She aimed to repeat that three minutes later from further out but couldn’t find the target this time.

McGinley hit the sidenetting for Farmington just before the hour mark and Rangers went even closer shortly after; Jade Gallon hitting the woodwork with McNicoll beaten.

Stewart fired over with Forfar looking for a fourth before Smith sent a shot inches wide.

Rangers kept looking for a way back into the game as Robertson headed wide while Davidson forced a save from McNicoll again.

Brough and one of the two trialists who came on were denied by Baillie but she was unable to stop Farmington adding a fourth with a minute remaining; Davidson’s short free kick found Cassie Cowper and she turned her marker before sending a low effort into the bottom corner.

This wasn’t to be the final action of the game with Rangers finding two quick goals in injury time through Jade Gallon and Brogan Hay.

The result means Farmington move above Stirling University in the league before their midweek trip to the University Playing Grounds this Wednesday.