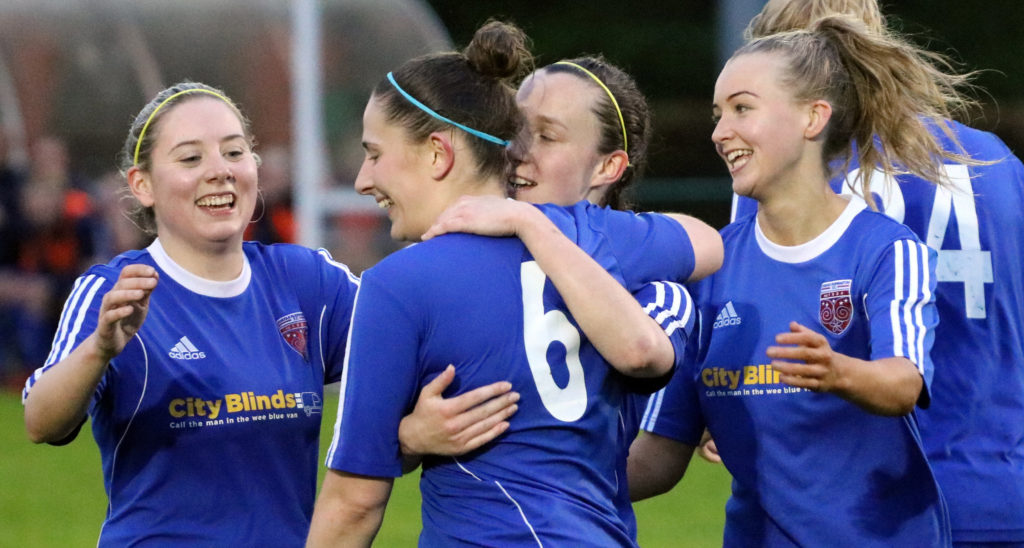 Forfar Farmington made it three wins in a row on Sunday as they eased past Spartans 3-1 to increase the gap between themselves and the bottom three.

Head Coach Mark Nisbet kept the same starting eleven that defeated Stirling University on Wednesday as he looked to keep up the winning run they have built.

Both sides had chances in the opening ten minutes with Caroline Heron heading into the arms of Rachel Harrison from a Robyn Smith free kick before Spartans’ Alana Marshall fired wide from distance.

Heron could have opened the scoring shortly after when the hosts failed to clear their lines leading to the attacker volleying past the post from the edge of the box.

Cheryl Kilcoyne failed to find the target in the 16th minute while Sarah Clelland cut in from the left wing before sending a tame effort into Fiona McNicoll’s arms.

Farmington started to dominate play after the first twenty minutes and saw Heron once again denied by Harrison with a curling shot.

The deadlock was broken after 32 minutes through some slack clearing by the Spartans defence; Smith’s cross was flicked by Heron, the defence couldn’t clear their lines and captain Nicola Davidson was more than happy to rifle home her second of the season.

It wasn’t long until the lead was extended and four minutes later Heron received a cross from Smith, she laid it off for Cheryl Kilcoyne to strike from 20 yards out. Her initial effort hit the bar before it looked like it may have hit the keeper and rolled in.

Spartans looked to get back into the game but two long range efforts were nowhere near the target and Farmington went into the break two goals to the good.

The hosts went closer two minutes after the break when Rachel Walkingshaw hit the inside of the post with the ball flying back into play. Farmington started a counter attack and made them pay as Danni McGinley outmuscled two defenders before slipping past a third and stroking the ball into the net.

Smith could have made it four shortly after with Harrison doing well to push her shot wide while Heron had a shot of her own deflected wide.

Subsitutions began to affect the flow of the game and it wasn’t until the 72nd minute that another chance was carved out; Smith involved again as she curled a free kick into the danger zone for Megan McCarthy to send a header against her old friend the post.

Spartans sub Kaela McDonald-Nguah was their most dangerous outlet in the second half as she hit the side netting before seeing another shot pushed wide by McNicoll. From Douglas’ corner McDonald-Nguah nodded in what was a late consolation with four minutes remaining.

The result means Farmington have won three games in the last seven games and will be high on confidence ahead of their visit to Celtic in a fortnight.