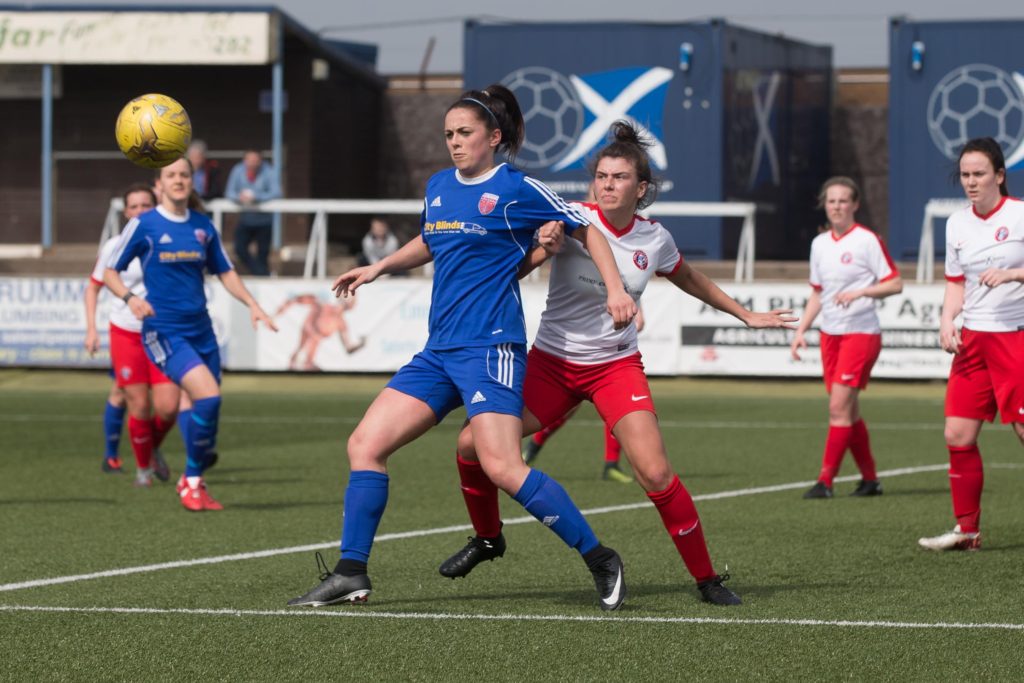 Forfar Farmington put in an uncharacteristic performance on Sunday as they were deservedly defeated 2-0 by Spartans in the SBSSWPL1.

Goals in either half by Alana Marshall and Kaela McDonald-Nguah sealed all three points for the Edinburgh side at a sunny Station Park.

After a three week break, Mark Nisbet made two changes to his side with Alana Bruce and Hannah Stewart replacing Kirsty Deans and Erin Cattanach.

It was a slow start to the game with only one chance coming in the first twenty minutes as Kaela McDonald-Nguah headed wide for the visitors from an Alana Marshall corner.

Farmington’s first chance came after 24 minutes; Nicola Davidson sending a ball towards Danni McGinley and she combined with Robyn Smith and Hannah Stewart before McGinley sent her effort wide of the mark.

Kayleigh Brough saw her header held shortly after before Simone McMahon sliced wide at the other end.

Spartans took the lead seven minutes before the break through a fantastic strike by Marshall from 25 yards, giving Fiona McNicoll no chance.

McDonald-Nguah sent a weak effort into the arms of McNicoll with the final chance of the half falling to McGinley. A poor clearance fell to Tammy Harkin and she set up McGinley but she could only fire wide from the edge of the box.

Spartans looked to add to their advantage and came close in the 51st minute when Simone McMahon’s cross was deflected into the path of Elena Santoyo-Brown but her shot was pushed round the post by McNicoll.

After the hour mark Farmington had their own chances; Smith volleying wide before McGinley stabbed wide from a Stewart cross.

The lead was doubled in the 69th minute through McDonald-Nguah as she nodded home a Simone McMahon free kick at the front post.

This took the sting out of the game and despite Farmington improving, they could only create one clear cut chance as Kirsty Deans fired wide with four minutes remaining.

The result means Farmington drop to seventh in the league and Mark Nisbet will be looking for a vast improvement when they travel to take on third placed Glasgow City this Sunday.