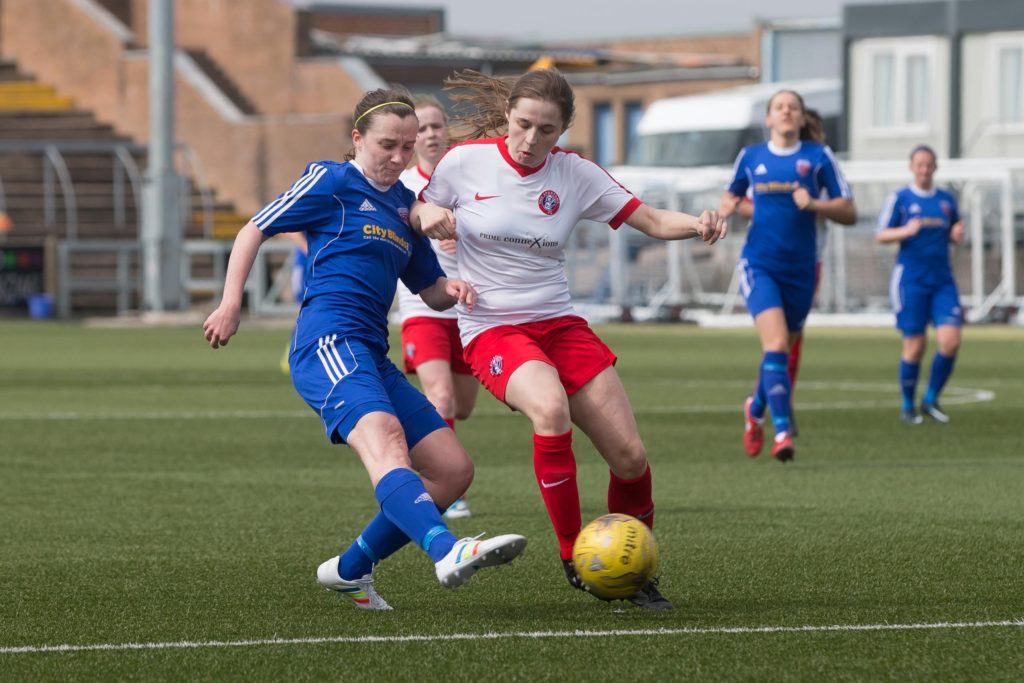 Robyn Smith was disappointed that Forfar Farmington ‘didn’t turn up’ in their defeat to Spartans on Sunday.

The winger reckons games like Sunday are exactly the type of games they should be looking to win if they want to establish themselves back in the top flight.

24 year old Smith feels the squad let themselves and the backroom staff down in Sunday’s defeat while giving opponents Spartans credit for their game plan.

“Sunday’s game was disappointing as we knew we could go out there and get another 3 points on the board and instead we didn’t even turn up. We let ourselves and the coaching staff down in doing so, credit to Spartans as they came out and wanted to win and they did exactly that.”

She continued: “These are the games that we should be going out and looking for the 3 points, it’s fine saying we put in a good performance against the top teams but it’s these games we need to come out on top and something just didn’t click.”

Farmington had played well in their first three league games and Smith feels they need to return to those performances otherwise they will struggle to pick up points.

“We got off to a good start with 3 points against Hamilton and put in two really good performance against the top teams and we’ve got ourselves into the League Cup semi-final so to perform like we did was disappointing.”

“We need to put in the performances like we did against Hibs and Celtic to ensure we get the points we’re looking for from the other games, because if we don’t, we are going to get punished and be walking away without any points.”

The former Jeanfield Swifts winger has been happy with her season so far but believes there is still room for improvement.

“I feel like I’ve performed well so far, making the exception of Sunday that is. I feel like I’ve started to understand more of my role and what not to do but I know there is always room for improvement.”

With a three week break since their previous game, it has allowed long term injury victims Sophie Milligan, Caroline Heron and Lindsey Dunbar to return to full training and Smith is delighted to see the trio return and boost the squad.

“It’s always great to see the injured players coming back in, especially Sophie and Caroline, both girls have been unfortunate and sustained injuries just before the season had started so it was a real blow to both of them, having them back will be a massive boost.”

“Lindsey has had a difficult time with not knowing what was up, but she’s worked hard to get back into training and it’s great to see her back and working to get herself back into the squad.”

Farmington now travel to Glasgow on Sunday to take on Glasgow City; Smith reckons they will always have a chance of taking something as long as they go there focused on the game and perform like they have done previously.

“We will regroup this week, put in a good week’s training and look to perform like we have done in previous games.”

“We are the underdogs in this game and no-one will expect us to win or even take anything from City as they are a top side but we are in this league for a reason and you never know what will happen on the day. We will go there focused on competing and see what happens come the final whistle.”