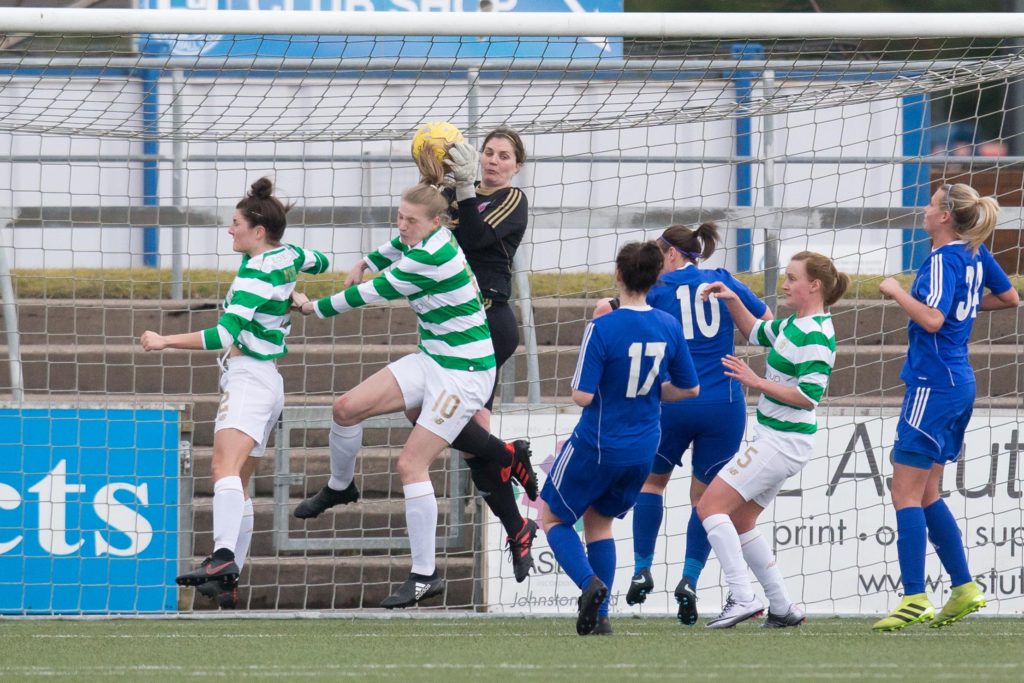 Goalkeeper Fiona McNicoll felt Forfar Farmington performed well despite their 2-0 loss at home to Celtic in the SBSSWPL1 on Sunday.

Farmington held their own against a tough Celtic side but goals from Claire Adams and Kelly Clark meant the visitors took all three points.

The 29 year old shot stopper reckons the introduction of Ruesha Littlejohn changed the game for Celtic with Farmington playing well throughout.

“I thought the first half we played well, we looked solid at the back and we passed the ball well at times.  The second half we started well, however when Celtic brought on Littlejohn I think she changed the game for them.”

McNicoll believes she had a good performance but was disappointed to concede the two goals in the way they did.

“I feel I did play well, however we still got beat.  As a team playing at the highest level, when people make mistakes or have a lapse of concentration teams at this level will punish you and that is what I think happened.

“The first goal was a good strike however it came from us having a corner and I could have possibly come out and collected the ball but Kelly Clark had no one marking her.”

Farmington currently sit fifth in the league after three games and the experienced keeper is happy with how they have performed so far and feels they can improve even further.

“I think the team have performed well so far however I do think the team as whole need to have a bit more belief going forward and attacking teams we come up against.  People need to be calmer on the ball when we have it and think about how we played last season.”

“We weren’t scared last season and we believed we could beat any team we come up against however this season I don’t think we have this belief yet.”

“Mark and the other coaches have been working hard on attacking drills for weeks and during training people believe they can take people on, run past a player and they are always taking shots.”

McNicoll has been ever present this season with Chantelle McKay having to make do with a spot on the bench and she feels having McKay and youngster Oliwia Gach training alongside her ensure her standards don’t drop, however she is confident McKay would be a more than capable replacement.

“It is great training with Chantelle and Oliwia every week, we have a good laugh and we work very hard during sessions. Chantelle is a great goal keeper and I know if my standard were to drop she would be able to step in with no problem.”

Farmington have been on the lookout for a goalkeeping coach since Kev Candy left at the end of 2017 with John Diplexcito stepping in to help while the vacancy is filled and McNicoll was full of praise for him.

“I would like to thank John for stepping in to do some goalkeeping coaching on a Wednesday night, he is a great coach, sessions are always hard and we are learning a lot from him.  During the sessions all the keepers are working hard and having fun at the same time.”

Farmington will head to Stirling to take on Stirling University this week and McNicoll believes the side can grab a win against a well organised side.

“Stirling are a well organised team but I do believe we can take points home to Forfar on Sunday and move us up the table.  I feel we can beat any team in the league if we just have a bit more belief when attacking other teams.”