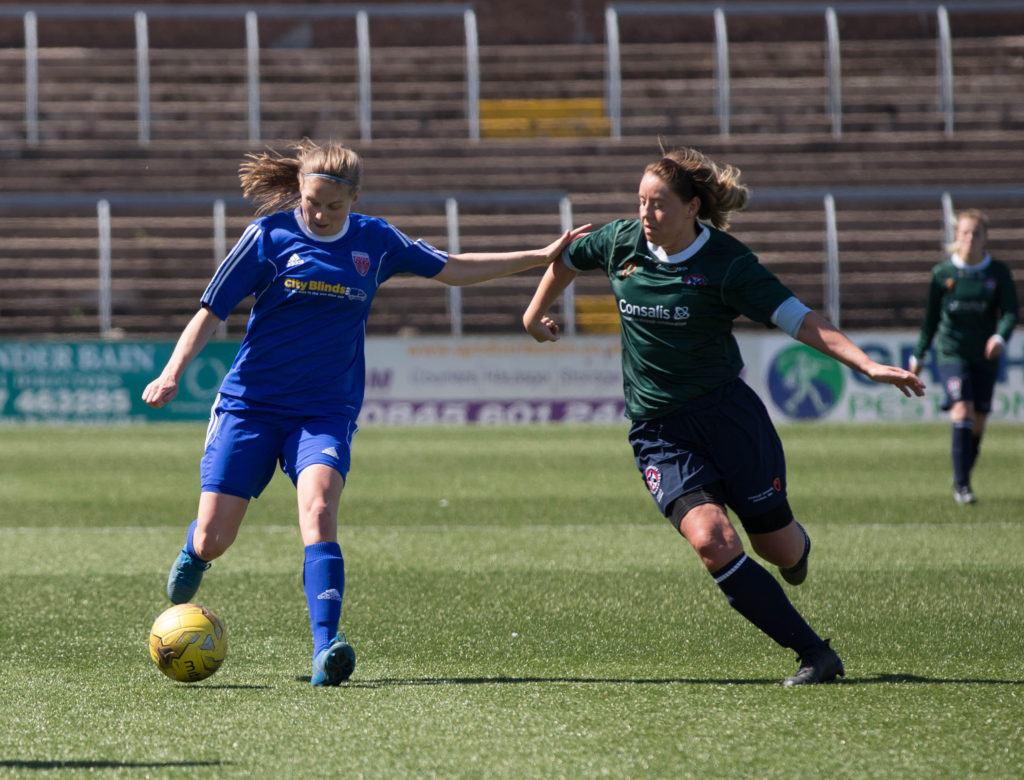 It was a rare off day for Scottish Building Society Scottish Women’s Premier League Two champions Forfar Farmington as they fell to a 3-1 defeat at Peffermill against Edinburgh University Hutchison Vale.

A much changed Farmington were two goals down to Anna Hume and Nichola Sturrock goals at half time with Margaux Durand-Watson adding a third before Danni McGinley’s consolation.

There were six changes made from the title winning game a fortnight ago as McKay, Parsley, Cattanach, Shillitto, Debio and Brough came in for McNicoll, Davidson, McCarthy, McGinley, Smith and Kilcoyne.

It was an even start for both sides with EUHV looking strong at the back to deny Farmington and they went ahead after ten minutes; Kayleigh Brough couldn’t get a strong enough touch on Nichola Sturrock’s cross and it fell through to Anna Hume who fired home.

Farmington started to settle more into the game with Beth Shillitto firing straight at Charlene Lessells in the 15th minute.

Shillitto had the ball in the net when she converted a Scott cross but the referee pulled play back as Scott was adjudged to have been offside when she received the ball before.

Caroline Heron was denied by Lessells from distance with the keeper beating Laura Parsley to the ball from Scott’s cross shortly after.

Hume nodded over for the hosts after meeting Beth Macleod’s cross while Heron and Scott combined at the other end only for Parsley’s effort to fall wide.

The hosts added a second just before half time when Sturrock looked to have taken the ball out of play but the referee kept play going and she lashed the ball past McKay.

Farmington came out from the break looking to have a better second half performance and seemed to have that with Heron threatening the keeper within sixty seconds of the restart.

Scott sent a cross into the danger zone which Parker-Smith had to look sharp to paw it away from going straight in.

McGinley and Heron combined in the 65th minute for the latter to fire straight at the keeper as Farmington kept up the pressure.

Heron had a header cleared before the attacker and sub Robyn Smith were denied by a resolute defence when Scott’s cross caused problems in the box.

The hosts extended their lead with their first clear cut chance in a while as Margaux Durand-Watson slotted home from Macleod’s cut back.

Fiona Boslem fired over from a Sturrock corner with eight minutes left but it was Farmington who found the net as the game entered injury time; Alana Bruce played the ball to McGinley and she turned the defence before slipping the ball past the keeper.

Deans almost added a second moments later when Smith’s cross found her but her effort was blocked before being cleared.