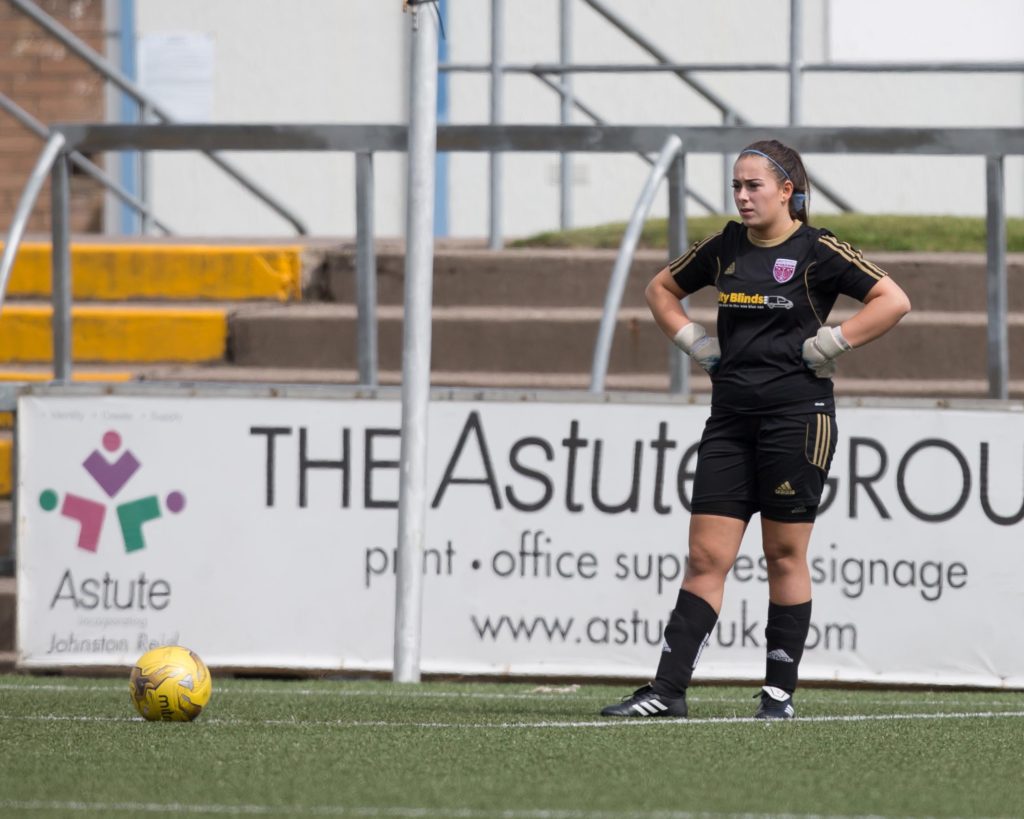 Despite the result, Chantelle McKay was delighted to make her second senior start for Forfar Farmington in their 3-1 defeat at Edinburgh University Hutchison Vale.

The 21 year old goalkeeper has had to play second fiddle to Fiona McNicoll this season but she hopes she can play a part in the final two games before the season ends.

McKay felt the league champions didn’t play to their best potential at Peffermill against a tough EUHV.

She said: “The game today was always going to be a tough game for us, as champions everyone will now set out to try their hardest to beat us, as a team we tried to battle through this in the game but sometimes everything doesn’t go your way.”

“We didn’t play to our best potential but I feel like we didn’t play our worst; we struggled at times to just play the simple game and this showed in the final result.”

Farmington sealed the league title a fortnight ago and made some changes to the squad for this game, McKay believes the team maybe took their foot off the gas after the title win.

“I feel like we did take our foot off the gas a bit but it only seems natural as we don’t have so much pressure on us now as we’ve succeeded in the one job that we set out to achieve this season which was promotion.”

“There was a lot of changes within the team as well today as the manager focused on giving game time to those who haven’t played as much game time as they would have liked this season which I feel is fairly understandable it’s just a pity we couldn’t get the result we wanted.”

McKay made her second start of the season after beginning the season in the U23’s then making her senior debut in August and the talented stopper was happy to play following the excellent form of Fiona McNicoll.

She said: “I was obviously happy to get more game time, it’s been a frustrating time but Fiona has been in great form so I can’t complain as she is a top keeper. But I have been making sure that I have been training hard so I would be ready when my chance came.”

She also explained she had a few nerves about playing but now hopes she can build on her performance with just two games remaining of the season.

“I was already nervous about today’s game before it started, due to lack of game time I don’t feel the most confident in myself lately.”

“Everyone in the team wants to play a part of the game and I feel like I’m no different. I will continue to work hard throughout training these next few weeks and hopefully I will be rewarded with more game time in these upcoming games.”