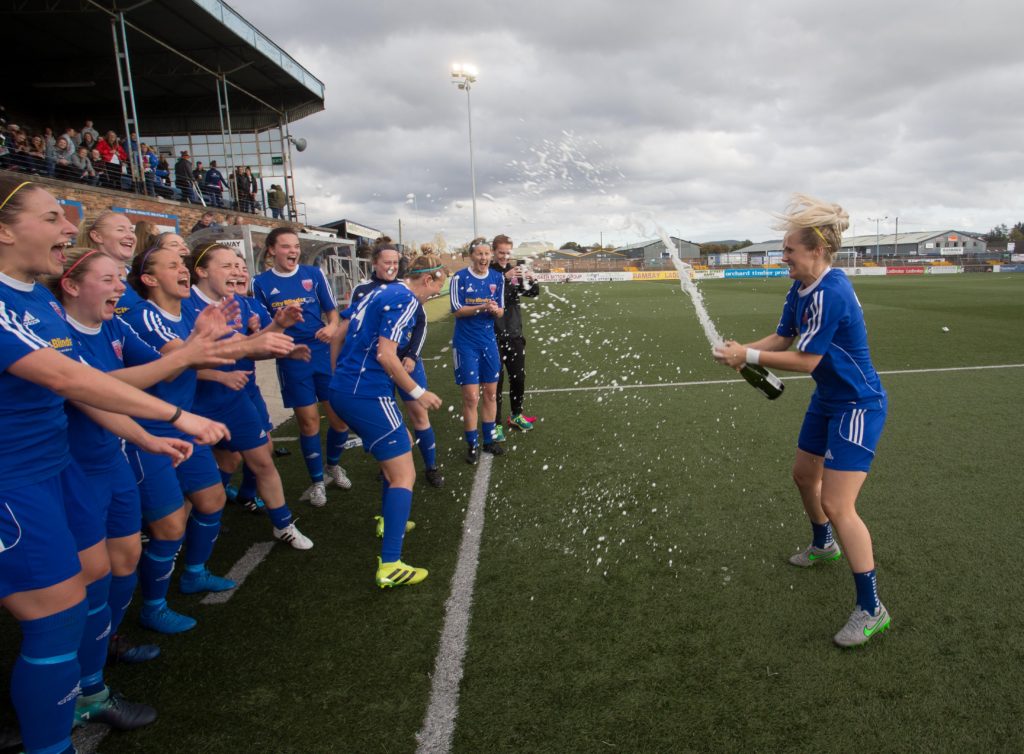 Julia Scott feels that the Scottish Building Society Scottish Women’s Premier League Two title win is the best achievement in her career because it feels like a family at the club.

Farmington clinched the league with three games remaining and Scott wants to finish the season on a high starting with this weekend’s clash at Edinburgh University Hutchison Vale.

The 34 year old attacker believed the squad were confident of doing well this season but were always aware it would be a challenge.

She said: “It feels awesome to have won the league, we were confident we could do well this season but never underestimated that it would be a challenge, which it has been, but winning the league with three games to go is fantastic and to also reach the Scottish Cup semi final has rounded off a well worked season.”

Scott has won titles with previous clubs, having played in Canada, England and for her country and she reckons this season’s title is the best due to the team spirit both on and off the park.

“I would say this is the best, not only because personally I’ve scored a few and assisted a few, but I’ve said it before and I’ll say it again, we are not only a team, we are a family here at Forfar.”

“Players and coaches get on so well and work for each other on and off the field. I have won a few league titles with a few clubs but this one feels the best.”

Scott has chipped in with ten goals and thirteen assists over the season, totalling a third of the side’s 69 league and cup goals however she admits she always feels she can improve.

“I’ve always been a player who always feel I could have done better, but I am happy with those stats and hopefully there will be more to come in the final three games.”

The side have three games remaining with visits to Edinburgh University Hutchison Vale and Hearts before hosting Jeanfield Swifts and Scott reckons the side won’t lose focus and approach the games looking to take three points in every battle.

She said: “We have to keep our focus and I don’t think the gaffer will let us be anything else but focused. We want to finish the season on a high with nine points in the final three games to conclude a fantastic season. We have won the league but we have a job to do still and also start to focus on our play for next year.”

Farmington had a taste of next season when they played Glasgow City in the Scottish Cup semi final earlier this month and the attacker feels it was great to see where the squad is at ahead of improving before next season’s return to the top flight.

“It’s always good to play higher level teams, not just for the experience but also to see where we have to be and what we have to work on as a team and individually. We are under no illusion that next season will be a battle but it’s a challenge this club is ready for again.”