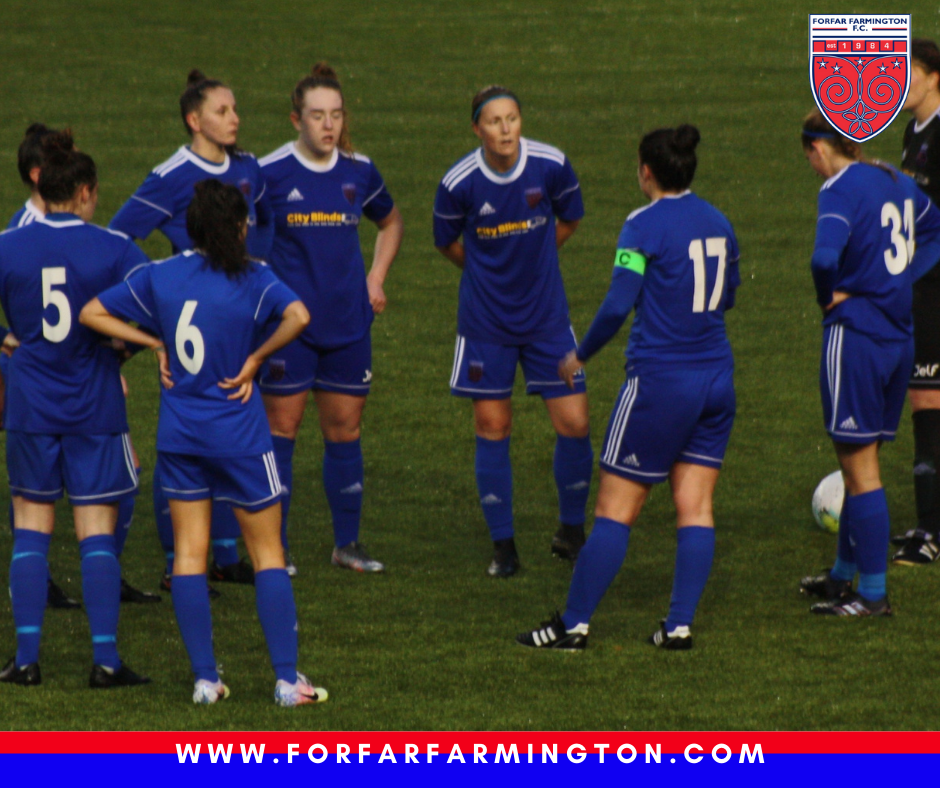 Glasgow City maintained their fine start to the season with an 8-1 win over a motivated & enthusiastic Forfar Farmington side who were hit by sucker punches regarding goals in periods of the game however the competitiveness was definitely showcased at a windy Broadwood Stadium this afternoon.

Glasgow City took the lead on 11 minutes when Zaneta Wyne’s cross was parried by Fiona McNicoll & there was Kirsty Howat to bundle home into an empty net from 4 yards out.

Forfar Farmington levelled on 19 minutes, a fantastic free kick by Cassie Cowper was met by Donna Paterson who headed home a fine effort into the bottom left hand corner beyond Erin Clachers. Farmington had been losing at this moment in time possession wise however they were organised & got an equaliser which they worked hard for.

A thunderous strike from Rachel McLaughlan made it 2-1 to Glasgow City finding the bottom left hand corner past McNicoll from 30 yards out, Kirsty Howat then got her 2nd of the game after McNicoll lost control of the ball & there was Howat to put the ball into the net.

Jo Love showed her experience in this game once again & made it 4-1 with 9 minutes before half time turning Kirsty Fraser before keeping her composure to slot into the net.

Glasgow City added a 5th with Aoife Colvill finding the bottom corner with a good finish before a 6th followed soon after thanks to a Mairead Fulton header.

Head Coach McConville brought on Jade Lindsay in place of Billie Simpson with the former adding a new dimension to avoid any hope of serious capitulation. When she came on, she gave Forfar positivity and got into good areas. Aimee Anderson also played well when she came on & gave Forfar something different in attack despite the game being wrapped up by that point.

Forfar almost pulled one back when a Cassie Cowper ball found London Pollard however the striker pulled the shot over the bar. Glasgow City added a 7th with Leanne Ross sending Fiona McNicoll the wrong way.

The visitors remained positive on the ball with Anderson giving Glasgow City something to think about, she played a good ball into sub Jade Lindsay however a good save by Erin Clachers denied Lindsay, it was an afternoon in which Farmington could’ve added to their tally however it wasn’t to be.

Howat then got her hat-trick after a Shannon Wojcik shot wasn’t properly dealt with by the Forfar goalkeeper & there was Howat to seal her hat-trick, from a period in which they competed with City, it was turning into complete capitulation for Forfar however they all gave 100% to the cause which was fantastic for everyone associated with Forfar Farmington Football Club.

Not the result anyone wanted however everyone played well & that was a big positive for everyone involved, the defeat is a blow however next week at home to Hearts is a great opportunity to bounce back, there was a lot of young players featured & they will learn & develop as a result of this.

Glasgow City showed their strength & depth & the movement on & off the ball was pleasing from their point of view, Farmington competed for large periods of the 1st half against City & that will be a plus sign for the management team to reflect over.