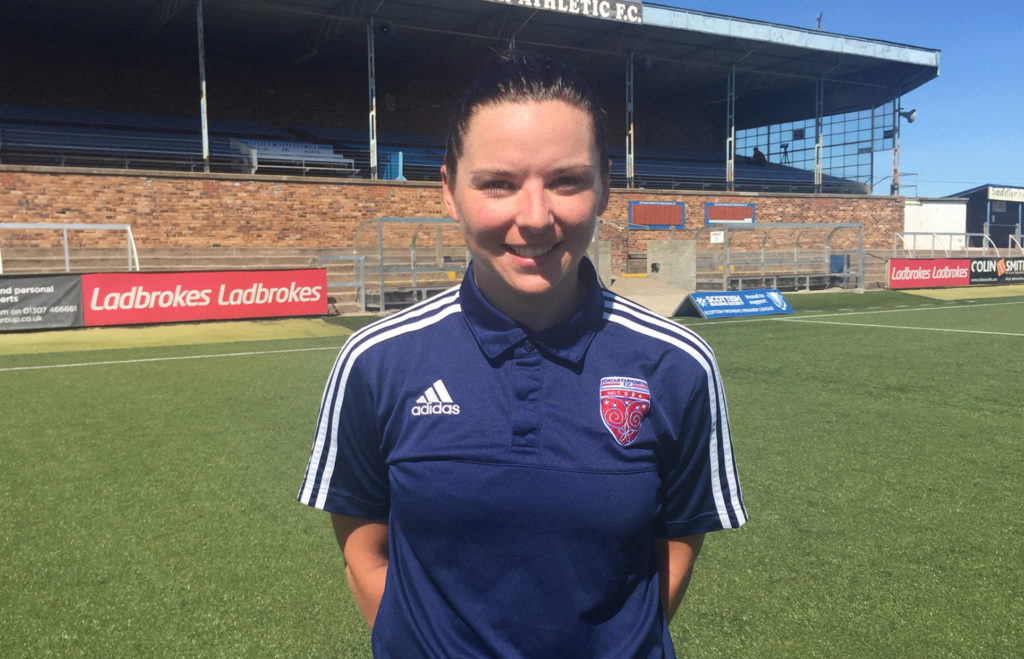 Rebecca Dempster believes working under Mark Nisbet can bring out the best in her after signing for the club last month.

The attacker previously worked under the head coach in a spell at Farmington nine years ago and she feels it was only natural to come to the club again.

Dempster, 27, is looking forward to getting back to the pitch with her new team mates as she admits she feels welcomed already.

“I am delighted to have signed with Forfar. I’ve only been to one session with the squad and already I feel welcomed and relaxed. I can’t wait to get going in the second half of the season.”

The former Aberdeen striker returned to Scotland after a year in Italy with Fimauto Valpolicella in Serie A before another year in Australia, spending time with Calder United in Melbourne before six months playing in Brisbane.

With a return to the country, Dempster believes it was an easy choice to work under Mark Nisbet again having played for him in 2010.

“Coming back to play in Scotland after a long time away, it only seemed natural to sign with Forfar and work alongside Mark again. He knows me very well from previous years, which was the most important aspect for me in deciding who to continue my football career with. I think he can get the best out of me.”

Dempster, who was capped three times for Scotland between 2011 and 2012, praised the club’s ambitions and reckons things will only improve with the club with professional standards shown by the staff.

“The club has always had huge aspirations and it shows. When I played here eight years ago, the facilities were not quite to the standards they are now. The hard work the staff have put in definitely shows, it feels very professional and I know things are only going to continue to improve and develop.”

The attacker spoke highly of her time down under, expressing gratitude to the people she met over there and feels the stint was exactly what she needed.

“I loved my time in Australia, it was an important trip for me and my health. The standard of football wasn’t quite as high as it is in Scotland, but it was exactly what I needed at that time of my life. I will be eternally grateful for being given the chance to live in such an amazing place and meet so many incredible people. I’ve definitely made friends for life over there.”

With Farmington now idle until the league restarts in August, Dempster believes the break may help her having played up until the night before she flew back to Scotland.

While the side have stopped training for just now, she is excited to get involved with the squad once again after being introduced to them when she made her second debut against Glasgow City at the end of last month.

“I was playing games right up until the night before I flew home, so in all honesty the break is probably a blessing for me too. It would be good to get involved in training with the girls on a regular basis to gel with them, but as I said before, I have spent one game day with them and I already feel very welcome so I don’t think that will be an issue. I am very excited for the second half of the season because I think we can do continue to do really well.”