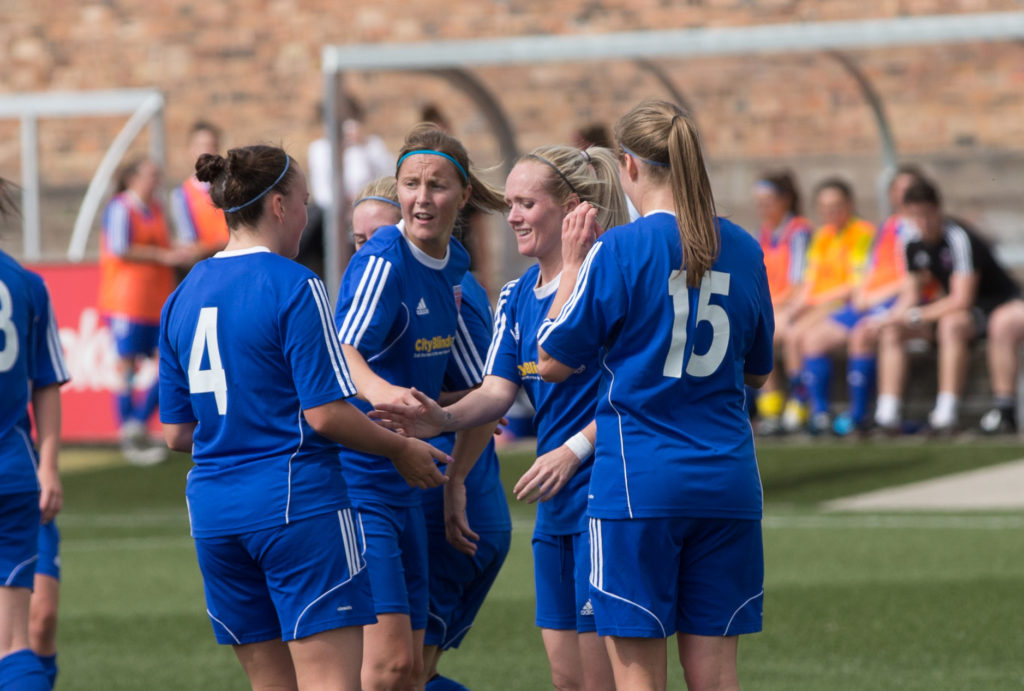 Forfar Farmington cruised into the quarter finals of the SSE Scottish Women’s Cup with a 7-0 win over Buchan as Julia Scott grabbed a hat-trick.

An own goal from Lauren Sangster opened the scoring with Scott’s treble, Robyn Smith and Alana Bruce’s stunners and Laura Parsley completing the scoring in the third round tie.

Farmington were unlucky not to go ahead less than sixty seconds in when Julia Scott’s header was held by Lauren Sangster from Alana Bruce’s cross.

The deadlock was broken in the fifth minute; Scott’s corner was spilled into the net by Sangster. The goal was originally credited to Scott, however the dubious goals panel judged it to be a Sangster own goal.

The hosts kept the pressure up despite the early goal as Scott saw an effort fumbled before Sangster had to look sharp to save Nicola Davidson’s powerful effort.

In the 18th minute Mark Nisbet’s side were awarded a free kick on the touchline in line with the edge of the box. Scott stepped up and sent the set piece flying past Sangster, this time the goal was definitely the attacker’s.

Cheryl Kilcoyne had a shot blocked by the defence before sending a cross into the area for Scott to bundle home; the assistant ruling out the goal for offside.

It was 3-0 on the half hour mark with Scott scoring her second of the afternoon; sending a 20 yard free kick over the top of Sangster.

Robyn Smith added to the tally in the 39th minute with a fantastic 25 yard for her eighth of the season.

Farmington continued their dominance after half time with Smith and Kirsty Deans denied by the defence within the first 25 seconds of the second half.

In the 47th minute sub Laura Parsley flicked on a Smith cross but Scott couldn’t divert it past the keeper.

Parsley fired straight at the keeper nine minutes later before she was denied again shortly after.

Fellow sub Kayleigh Noble had a cross-cum-shot palmed away by Sangster and the keeper did the same again with a Parsley effort seconds later.

The forward looked keen since coming on but Sangster came to the rescue of the visitors yet again in the 65th minute, blocking another shot with her feet.

Parsley did have the ball in the net two minutes later but was adjudged to be offside.

Buchan’s only clear cut opportunity of the match came through Louise Brown in the 68th minute; her shot held by Fiona McNicoll.

Alison Debio and Parsley had efforts cleared by the defence but the lead was eventually extended in the 75th minute when Noble’s through ball found Scott and she made her way towards goal before curling home from outside the box.

Sophie Young was denied her first goal for the team when her shot was cleared off the line after beating Sangster but it wasn’t long before Farmington netted their sixth with another excellent finish.

Alana Bruce collected the ball on the left wing and made her way towards goal; beating a defender before giving Sangster no chance.

The scoring was completed with seven minutes left when Beth Shillitto’s shot was spilled and Parsley gleefully tapped the ball home after being denied so many times since coming on.

The result sends Farmington through to the quarter finals for the first time since being runners up in 2012. Their potential opponents could be any of Glasgow City, Jeanfield Swifts, Cumbernauld Colts, Glasgow Girls, Hamilton Academical, Rangers or the winners of Hibernian vs Celtic.