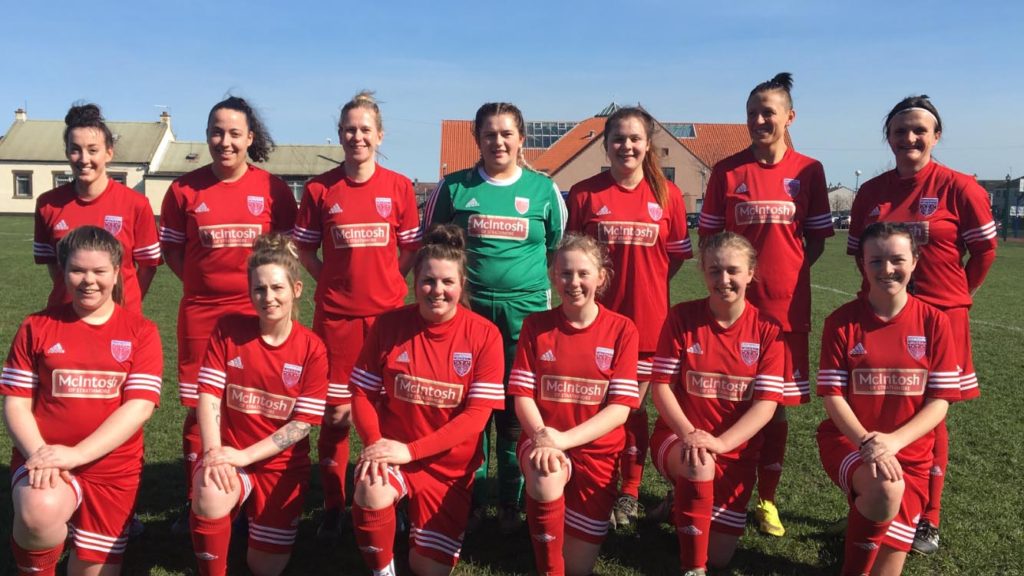 The Ladies side returned home after a long trip to Prestonpans with three points in the bag as substitute Cali Roberts scored two second half goals to seal a 4-2 win against Seton Ladies.

With half a dozen players unavailable for various reasons the thirteen players on duty put in a sterling shift. It wasn’t the prettiest of games but Forfar started quickly with Stewart, Harley and Mulholland all spurning chances after beating the high Seton offside trap.

As is the case when you don’t take chances you are always prone to conceding and a poor goal kick followed by equally poor marking allowed Seton to go in front.

The side reacted well with a superb right wing cross from Mulholland being headed home by Pauline Harley. A poor kick from the Seton goalkeeper was controlled and dispatched back over her head into the net from all of 30 yards by Chelsie Coyle to put the team ahead at halftime.

Seton however with the slope and slight wind at their backs struck again early in the 2nd half with a left wing cross not being dealt with and their striker scoring to square the game.

As was the case in last week against Hutchie Vale Development when they let slip a two goal lead, the ladies didn’t let it deter them and they went on to win this game too. A scramble in the box following a corner was rifled home by Cali Roberts and she scored again with quarter of an hour left when her left foot shot was well saved before she smashed the rebound home into the roof of the net.

Both teams ended with 10 players as a Seton defender received her 2nd yellow in the 82nd minute before Forfar keeper Rachelle Milton went off injured with five minutes remaining, Harley deputising.

Ladies coach Jeff Rioch commented after the game “We’re delighted to pick up 3 points away from home; we can take a number of positives from the game, not least the amount of chances we are creating. We can be more clinical but ten goals in two games with five different scorers is pleasing. I was happy for all the players today in particular our two subs Cali & Kirrin who both had a positive impact in the last half hour which was great to see.”

“We’re still a young squad and learning physically how to cope in this league and so far so good. We face an in form Raith Rovers team who we know are full of young, quality players, next Sunday, and we’ll work hard again in training this week to make sure we are ready for the challenge.”