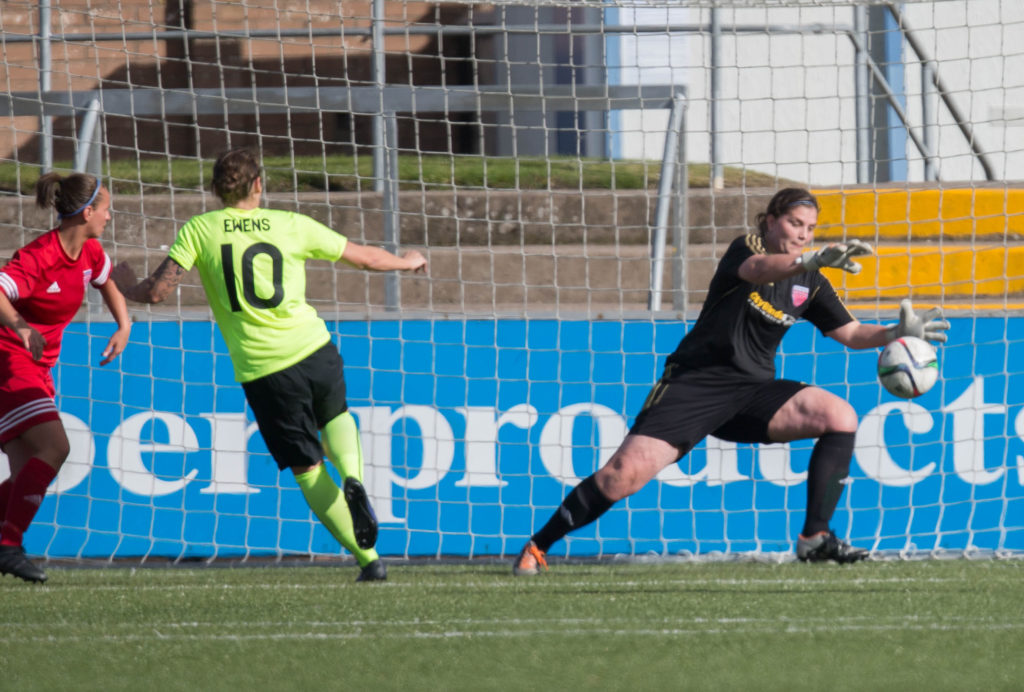 Fiona McNicoll was delighted to find out her teammates had voted for her as their player of the year for 2016 recently.

The Forfar Farmington goalkeeper was given the Players’ Player of the Year award and she reckons she has improved in part due to goalkeeping coaches Kevin Candy and Mike Gourlay as well as training with young keepers such as Hannah Dryden.

28 year old McNicoll admitted that, despite winning the award, that it had been a difficult season both for her and the team suffering relegation.

“I feel very grateful for winning the award, it is very special as it is not the coaching staff that decided this, it is the girls I play and train with every week.  It is a great feeling to know that your teammates think you have played well this season.”

She continued: “Personally I found this year very challenging, I know that I would have a busy season being the keeper and the goals against column speaks volumes. I tried to remain focused and try and not let the score lines get to me however that didn’t always happen. What helped me deal with this is speaking to the goalkeeping coaching during training. They kept me motivated and focused during training as well as during games.”

Four players have departed the club recently and McNicoll extended her thanks for their efforts and hoped to one day see them back at Station Park.

“We have lost a few important players for club due to the fact we were relegated from SWPL1 and I would like to wish them all the best in their future and hope to play alongside them again one day, in a Farmington jersey of course.”

The keeper reckons Farmington have a good chance to return to SWPL1 at the first attempt in 2017 and believes that youth may play a part in this with the amount of youngsters involved in the squad as of late.

She said: “I would love the team to be able to bounce back into the SWPL1 at the first attempt however we need to do this as a club. We need to attract players to come to Farmington as well as work with the players in the youth system.”

“During this season I have had the chance to train with the development squad and some under 15 and 17 players and the future does look bright for Farmington as we have a lot of talented players coming through the Club.  However the young players should not be put under too much pressure, they need to be given time to continue with their development and will need to adapt to playing senior women’s football and this will take time.”

“What I believe is important for the team’s success is players having an understanding of the game and most importantly their teammates’ game. I have been lucky to play alongside Nicola Davidson, Alana Bruce and Gemma Collier for many years and during games when I am thinking of giving passing them the ball, I know these players’ abilities and what they can do with it, I know their strengths and weakness and they know mines.  These tools are very important to have within a team and I believe if the team can develop this as a whole we will be successful.”

McNicoll has been training with younger keepers this year such as Hannah Dryden, Oliwia Gach and AJ Meach and maintains that it is great for the talented youngsters to get the amount of goalkeeping coaching they do as it was not something she was afforded at their age.

“It has been great training with Hannah this year and it has kept me on my toes a bit, but it has also been great training with AJ Meach and Oliwia Gach. I really enjoy training with the youth goal keepers, we have fun but we do work hard, I believe it has helped them develop their own game and having goalkeeping coaches at the club is something I never had at their age and it shows how much the womens’ game is growing within the country.”