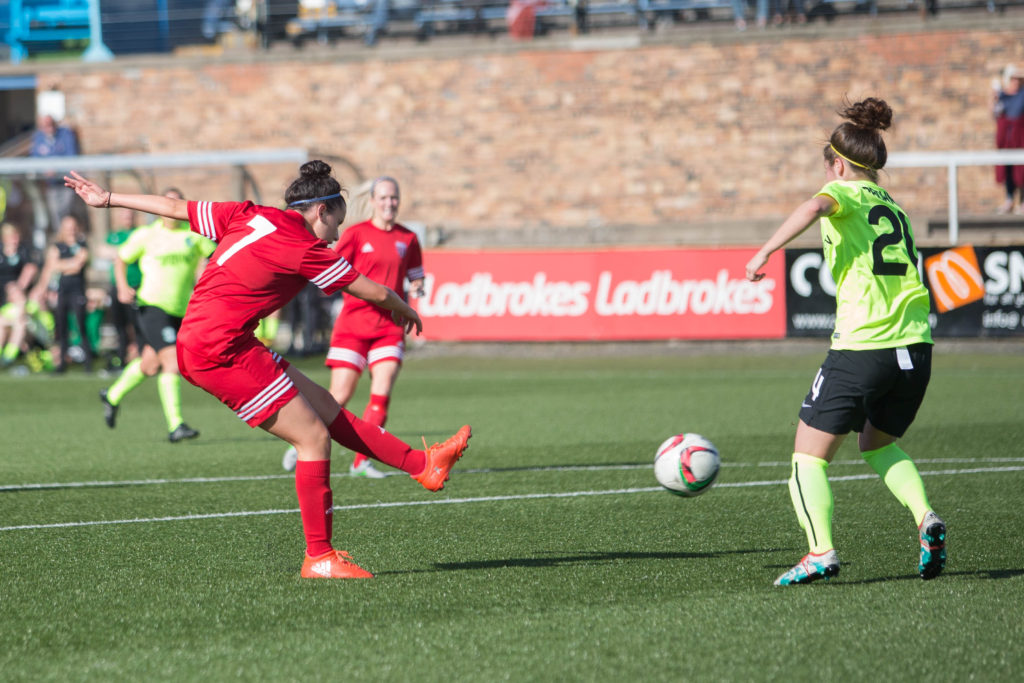 Forfar Farmington’s eleven year stay in the Scottish Women’s Premier League was ended with a 5-1 defeat to Hibernian on Sunday.

Despite Amy Gallacher’s opener, two own goals coupled with a Lizzie Arnot double and Caroline Heron’s lob meant Farmington were faced with the drop to SWPL2.

Lindsey Dunbar replaced Megan McCarthy in the only change from last week’s defeat at Aberdeen, Dunbar making her first start since June.

The visitors started off well with Abi Harrison and Kirsty Smith testing Fiona McNicoll early on while Farmington were dealt a blow when Jade McLaren was forced off with a head knock, Nicola Davidson replacing her.

Lizzie Arnot forced a good save from McNicoll however it was Forfar who took the lead in the 27th minute; Kirsty Deans’ through ball found Amy Gallacher and she composed herself inside the box, beat a defender before stroking the ball past Fife for her fourth of the season.

Harrison nodded over as Hibs looked to level the scores quickly with Farmington coping well with the talented Hibs attack. Gallacher came close to doubling the advantage on the half hour mark however; her long range effort was dealt with well by Jenna Fife.

Deans sent a thundering volley inches over the bar two minutes later after being teed up by Dunbar.

The visitors went in to half time level after Smith’s low cross was turned in at the near post by an unfortunate Farmington defender.

Two minutes after the break and it was another own goal that put Hibs ahead, Arnot’s cross was deflected in with McNicoll beaten.

Holly Napier saw her effort held by the keeper after being set up by Gallacher before Hibs sub Sarah Ewens curled over from the edge of the box.

Arnot extended the lead on the hour mark when Cornet was brought down by Dunbar, the winger netting the resultant penalty.

Dunbar went close to reducing the lead but it was the visitors who struck again in the 76th minute with former Farmington striker Caroline Heron lobbing McNicoll from 25 yards.

Davidson fired inches wide in the final stages of the match but it was the visitors who netted again with three minutes left; Arnot slotting home a second penalty despite the efforts of McNicoll.

The result means that Farmington are now unable to catch Aberdeen’s ten point lead over them and the side will now regroup ahead of their final three SWPL1 matches and prepare for SWPL2 in 2017.