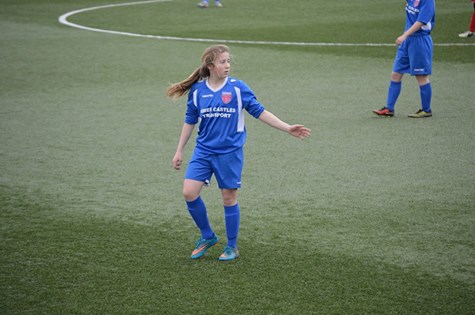 The prospect of meeting last year’s U15 league champions from Monifieth Ladies FC in their first meeting this year was one that the girls were looking forward to. They were under no illusions about the challenge that this match would present them and they were prepared for a very difficult match. Although the girls from Forfar eventually ran out convincing winners on the night credit must be given to their opponents who proved a very difficult nut to crack!

Playing downhill at Marketmuir the girls from Forfar immediately put the Monifieth defence under pressure however the visitors defence held firm. Monifieth looked to hit on the break and twice broke through the Forfar defence only for the threat to be stopped by an offside flag and then some great defending from the Forfar defence. Forfar then came very close to snatching the opening goal on two occasions when Taylor Clifford fired wide and then when Kacey McCabe’s drive was well-saved by the Monifieth keeper.

Forfar eventually broke the deadlock when a dangerous corner from Aimee Robertson was met by the head of Katie Whyte whose header crashed off the underside of the bar only for Rachel Robbie to react the quickest to head home past the keeper. A period of continued pressure then followed and it wasn’t until Philippa McCallum came on that the scoring increased when she fired home a fierce drive from distance that the Monifieth keeper couldn’t stop. Great credit must be given to the Monifieth keeper who made a number of excellent saves in the first half which saw Forfar go in 2-0 up.

The second half saw Forfar pretty much camped in the Monifieth half with the occasional dangerous break from their opponents being mopped up by a determined blues defence. The constant prodding and pressure on a resolute Monifieth defence eventually paid off when Amy Docherty beat the last defender before slipping the ball into the net. Forfar were then awarded a penalty when the referee adjudged a deliberate handball from a Monifieth defender. Phillipa McCallum stepped up to calmly send the keeper the wrong way and score. The replacement Monifieth goalkeeper then tipped two goal-bound efforts on to the bar, however, a fifth goal arrived when a placed effort from Kacey McCabe was deflected into the path of Amy Docherty who made no mistake to score.

A very competitive match that was played in great spirit. A convincing victory for Forfar against a well-organised and competitive team from Monifieth.