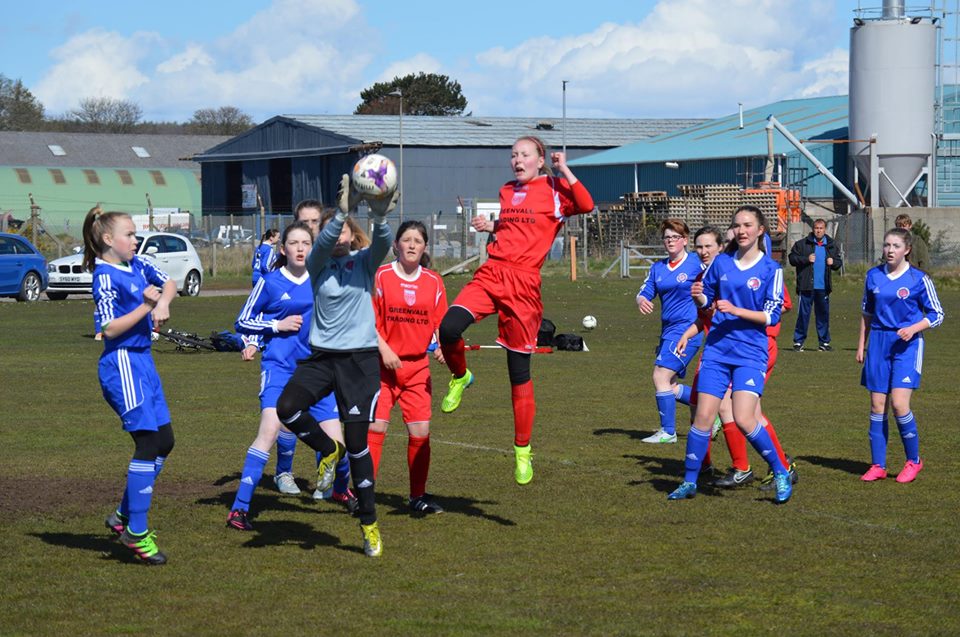 Blue skies, a lush green pitch and light sea breeze welcomed Forfar Farmington U15s as they arrived at Kenny Park to take on the girls from Montrose.

An absolutely stunning day for football was the backdrop for yet another powerful performance from the girls from Forfar who again played an effective passing and possession game that continually stretched and pressurised their opponents.

It wasn’t long before Forfar opened the scoring. A Montrose corner was cleared upfield to Neve Guthrie who broke forward before releasing a lovely pass into the path of the breaking Katie White who picked it up as she drove past the Montrose defender to then place the ball way past the keeper. A fortuitous second arrived a few later when a cross into the box from Kacey McCabe was directed into the net by one of the Montrose defenders, a deflection that gave the hard-working Montrose keeper no chance.

The combination of Neve Guthrie and Katie White carved an opening for Katie to cross into the box from the left where it was met first time by Aimee Robertson who placed a left-footed strike into the top corner. Katie White’s pace was causing all manner of difficulties down the left-hand side and when she again crossed into the box the ball was missed by everyone before being pounced on by Neve Henderson at the back post who placed the ball into the gaping net.

Katie White capped a tremendous first-half performance with two lovely goals either side of a clever finish by Neve Guthrie who had played a neat one-two which set her through on goal. Montrose’s keeper played very well in the first half and played a huge role in preventing Forfar from adding to their tally, however, half time saw the blues go in 6-0 up.

Forfar took some time to add to their tally in the second half due to some resolute defending from their opponents however it arrived when Aimee Robertson played a through ball to Rachel Robbie who made no mistake with a clinical finish. Aimee then added to her tally when she fired home a crisp first-time effort from the edge of the box that pinged into the back of the net. Amy Docherty then displayed a lovely turn of pace to weave through the Montrose defence and place the ball well past the keeper.

Neve Guthrie then capitalised on a keeper error to prod home into the empty net. Kacey McCabe was next to add to the scoring when she fired in a powerful drive from just outside the 18-yard box that flew high into net and Amy Docherty’s chasing play was then rewarded again after she worked hard to win the ball before firing home from close range. Taylor Clifford then brought the scoring to a close with a fierce left-footed drive that flew past the Montrose keeper.

A convincing victory for Forfar Farmington U15s against a team of girls from Montrose who competed for every ball for the duration of the game.