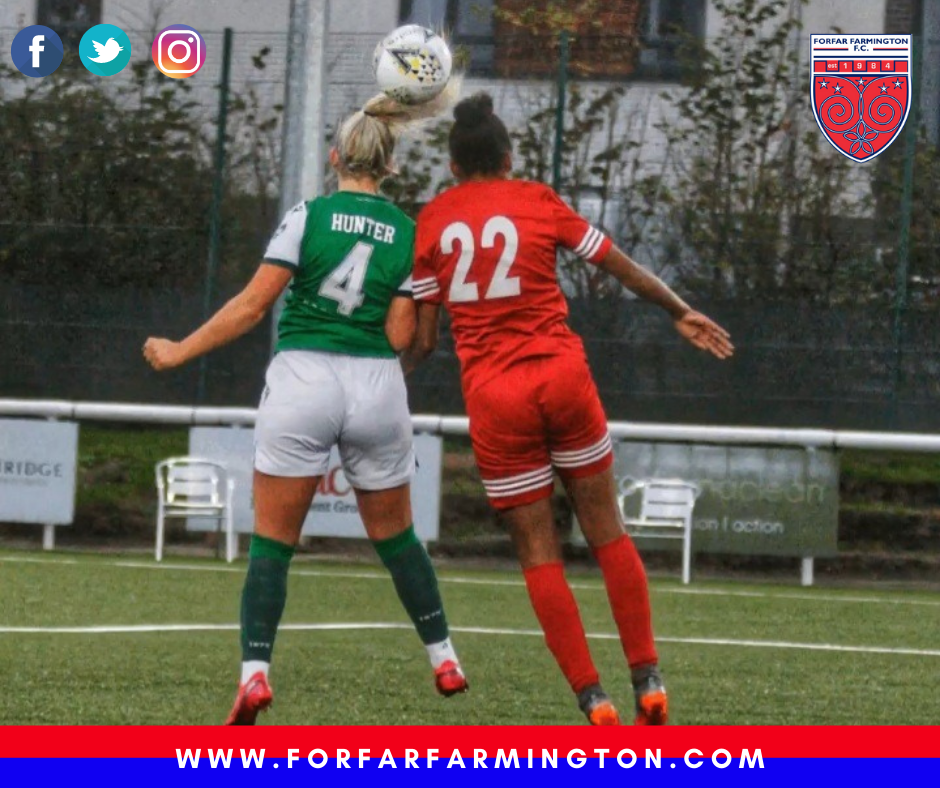 Hibernian did their business in the 1st half overcoming Forfar Farmington 3-0 at Ainslie Park, the hosts deserved their victory with a dominant 15-20 spell from Hibs was enough for the hosts to get all 3 points & get the outcome they desired.

Dean Gibson’s side showed their intent straight from the off trying to create openings from the word go in the aim of breaking up the Farmington defence, on 6 minutes, Ellis Notley had an effort from 30 yards which went wide of the left post.

Hibs took the lead on 15 minutes, a corner came in from the right side which wasn’t dealt with properly by the Farmington backline and there was Leah Eddie 18 yards from goal who guided the ball into the bottom right hand corner beyond Perry.

Siobhan Hunter made it 2-0 to the hosts shortly after getting on the end of a lovely cross to jump above London Pollard & Donna Paterson to guide the ball into the net past Perry who enjoyed a good afternoon in goals making some good stops despite coming out on the losing end.

A speculative effort by Carla Boyce on 28 minutes completed the scoring with her effort rocketing into the top right hand corner from distance past Perry, Farmington were struggling to adapt & a break couldn’t come quick enough for the visitors.

Farmington captain Cassie Cowper had a few stern words with her team-mates after the 3rd goal went in & it brought to an extent a response, there was more of a desire to get forward & strive to get a goal, Cowper found Erin Rennie with the midfielder keen to get on the scoresheet but her effort went wide of Emily Mutch’s goal.

Forfar Farmington Gaffer Ryan McConville alongside the rest of the coaching staff used the interval to sort a few things out & it brought more stability at the back in the 2nd period.

The changes then came thick & fast with Molly-May Ramsay, Eirinn McCafferty, Leah White & Cheryl Kilcoyne all coming on alongside our Number 10 Nicola Davidson. What a pity that we couldn’t get supporters into the ground to see the return of a Farmington stalwart in Nicola Davidson.

All subs brought a different approach to the game, especially Eirinn McCafferty always looking to get on the ball & pose a threat to the Hibs defence, she had an effort midway through the 2nd half go wide.

Davidson used her experience to control proceedings in midfield & her replacement Donna Paterson also did well alongside Kathryn Pender before the latter was also replaced by McCafferty.

London Pollard had a quieter afternoon than usual however still gave Hibs some problems, with time running out in the game, she did very well to get past Charlotte Potts showing some excellent skill before finding McCafferty who fired wide.

Cheryl Kilcoyne has found game-time hard to come by so far this season however the Farmington favourite gave 100% for the cause and almost scored a fantastic goal with a long range strike which Mutch had to tip onto the bar before the rebound by Nicola Davidson was caught offside.

A defeat is always tough however the 2nd half performance deserves praise for a more defensive organisation against a side of Hibs’s quality. Well done to Hibs on the win who picked up all 3 points after a tough period without a result recently.

Great to see our Number 10 Nicola Davidson back on the park after a curtailed period out with injury, a real stalwart of Forfar Farmington Football Club.