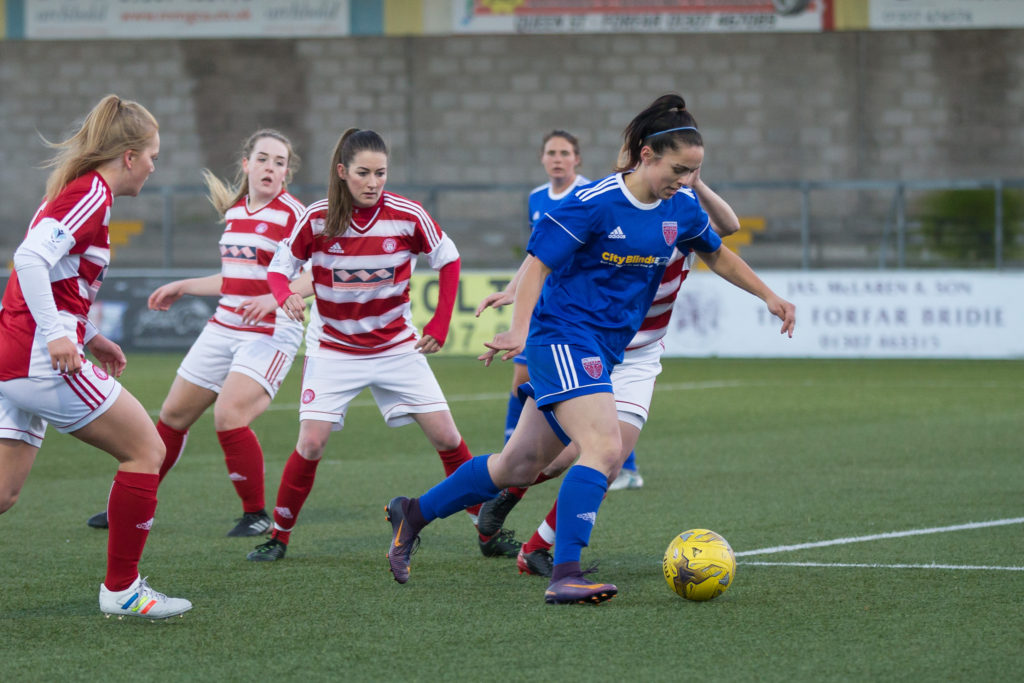 Despite a multitude of chances, Forfar Farmington were held to a goalless draw by Hamilton Academical in their final game of the 2018 season.

Failure to find the target along with Accies keeper Lauren Grant were the reason for Farmington missing out on all three points even after going down to ten following Cassie Cowper’s dismissal for a second yellow card.

The first chance came just two minutes in as Danni McGinley set up Kirsty Deans 20 yards from goal, however her effort flew wide of the mark.

Three minutes later visiting custodian Lauren Grant had to look sharp when Robyn Smith’s cross-cum-shot looked to be heading in until the keeper palmed the ball away. It was cleared for a throw in and McGinley found Megan McCarthy with her throw, she turned her defender before lashing a shot across the face of goal from a tight angle.

Rebecca Dempster found her attempted blocked in the eighth minute while Smith couldn’t find the target under pressure after a McGinley cut back.

After dominating the opening period, Farmington took the foot off the gas for a spell, allowing Accies to settle but the home defence stood firm, allowing no chances to be created by the visitors.

In the 27th minute captain Nicola Davidson floated in a free kick from distance and McCarthy flicked the ball on for Donna Paterson but she could only watch as her header was clawed away by Grant.

Paterson was involved again four minutes later when Smith’s free kick found the defender who sent the ball past the post.

Hamilton’s first chance came ten minutes before the break as a Katie Rice corner was diverted towards goal only to see Alana Bruce clear off the line.

Dempster fired wide from distance and Deans went one better shortly after as she forced Grant into a save while at the other end Rice saw her free kick held by McNicoll.

Farmington had time for one last chance before the break as McGinley volleyed wide from an Alana Bruce cross.

Mark Nisbet’s side kept up their pressure after the break with Cheryl Kilcoyne and Kirsty Deans firing wide from long range but they were dealt a blow in the 53rd minute when Cassie Cowper was shown a second yellow card for dissent.

After being reduced to ten women, Farmington struggled to keep up the same pressure, allowing Accies to creep back into the game but the hosts still looked more likely to find the back of the net first.

Debutant Paterson repeated the earlier two efforts in the second half as she failed to find the target from distance in the 57th minute.

Ten minutes later a fantastic cross from Davidson towards the back post found Bruce and half the support thought her shot hit the back of the net as the ball rippled the sidenetting after going agonisingly wide.

Substitute Caroline Heron fired wide from 12 yards after being set up by Bruce and Deans with the game entering the final quarter of an hour.

Hamilton could have gone in front in the 79th minute when a ball through the defence found Rice and her close range effort saw McNicoll pull off a brilliant save to deny the attacker.

Deans was denied by Grant six minutes later before the final chance of the game fell to Accies as Rice fired over.

The result means that Farmington end their first season back in the top flight in fifth place and will look to build on this next season.