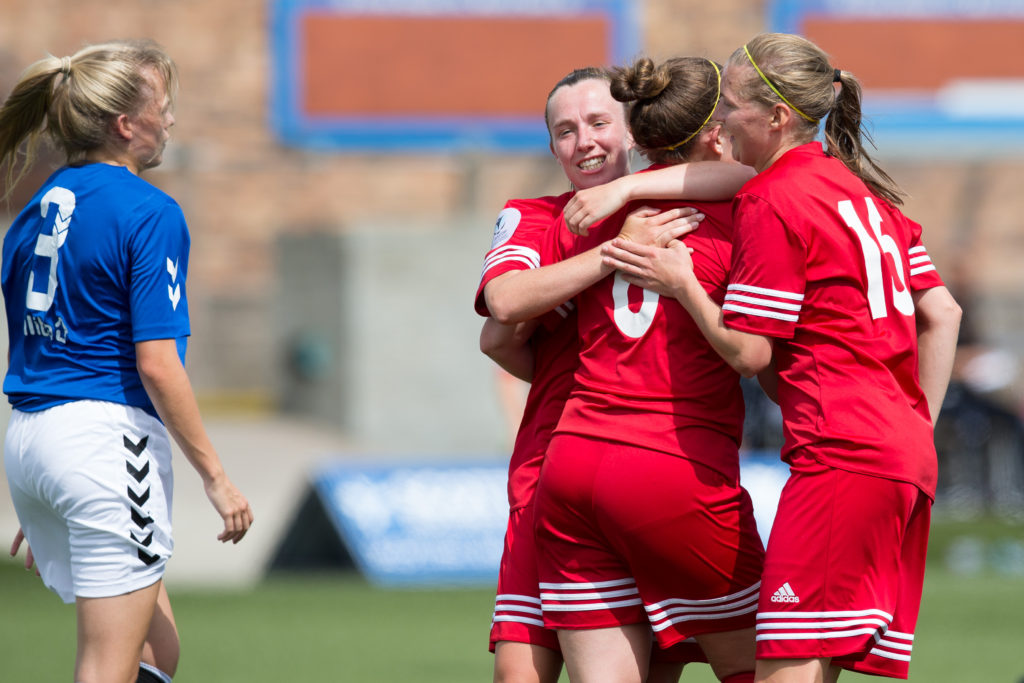 Forfar Farmington returned to the top half of the Scottish Building Society Scottish Women’s Premier League One with a 1-0 win over Rangers.

Danni McGinley’s 35th minute goal was enough to ensure all three points stayed at Station Park in a tight clash.

In the first game following the summer break, Gemma Collier and Rebecca Dempster replaced Caroline Heron and Kayleigh Brough, with Dempster making her first start since returning while Kirsty Deans and Cheryl Kilcoyne returned from long injury lay offs to take the place of Megan Robb and Erin Cattanach.

Both sides started off well in an even beginning; the first chance falling to Cassie Cowper four minutes in; Danni McGinley’s throw in was flicked on but the full back could only divert the loose ball over at the back post under pressure.

Chantelle Brown had her effort held by Fiona McNicoll as Rangers attempted to create their own chances.

Deans failed to find the target after quarter of an hour, meanwhile Jade Gallon did the same with a header following a Brogan Hay ball at the other end.

Sarah Robertson sent a tame attempt towards goal but McNicoll easily scooped up the poor shot in the 21st minute.

Just ten minutes before the break, Farmington took the lead when a fantastically timed through ball by Robyn Smith found McGinley and she rounded Ramsay and was more than happy to slot the ball into the back of the empty net.

Rangers looked to get back into the game before half time but Jade Gallon couldn’t get her free kick on target and it whistled past the post.

Farmington came out for the second half keen to double their advantage and came close twice in quick succession as Smith threatened Ramsay on both occasions.

Clare Gemmell sent a corner in that fell to Brown on the edge of the box, however she failed to find the target again.

Jade Gallon threatened once again in the 65th minute as she hit the side netting with the same player curling wide after a run towards goal six minutes later.

Twelve minutes before the end Smith hit the wall with a 20 yard free kick and when the loose ball returned to her she blasted her follow up effort wide.

Rangers were pushing for an equaliser but were failing to get a shot away; when they did they were more often than not missing the target or having tame efforts held by McNicoll, Gemmell’s 81st minute shot one of the latter examples.

Brogan Hay fired at McNicoll following a run by Jade Gallon as Rangers kept up their hunt for a goal but the final chance came for the hosts deep into injury time.

Farmington turned up the pressure on the Rangers back line and this almost paid off as the ball was collected and given to Caroline Heron but her effort was deflected wide.

The result puts Farmington above Rangers, returning to fourth place in the SBSSWPL1 with the season entering the final third.