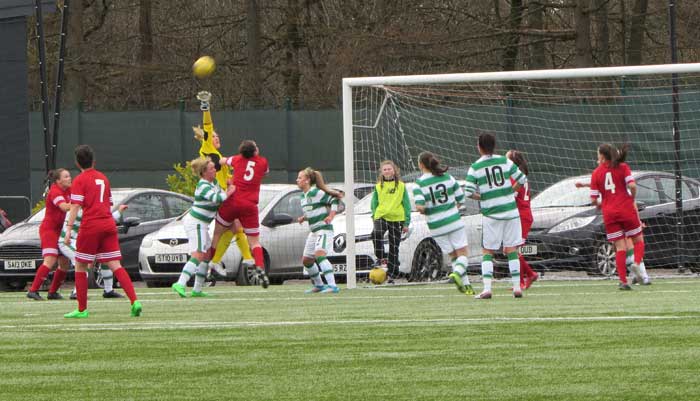 Forfar Farmington head coach Mark Nisbet vows that his side will learn from their mistakes after losing 4-0 in their opening league game on Sunday against Celtic.

A Suzanne Mulvey hat-trick along with a Kirstin McGuire goal ensured that Farmington started the season bottom of the table.

Speaking after the game, Nisbet said “I’m never happy to be beaten and certainly not when we gift the opponent easy goals in the way we did. It’s something we need to learn quickly as at this level you simply won’t get away with it but I’m sure we will resolve this in the coming weeks.”

Kirsty Deans hit the bar when the score was 2-0 with Celtic scoring soon after and Nisbet felt that if the effort has found the net it may have changed the game.

He said: “It would have been interesting if that had gone in as we were having a really good spell of pressure at the time. We spoke to the players at half time and said if we could get the next goal it would give us a chance. Unfortunately not longer after that happened we conceded the 3rd and the game was finished. These are the fine margins we face at times and on occasions these things go for you and sometimes they don’t.”

Georgie Rafferty almost opened the scoring for the hosts in the 7th minute but couldn’t keep her shot down. Two minutes later Sophie Milligan rose to meet a Julia Scott corner but her header was cleared off the line.

Celtic took the lead in the 17th minute when Mulvey capitalised on a poor pass to curl past Fiona McNicoll and it was two just four minutes later; a ball across the box was bundled home by Kirstin McGuire.

The Forfar defence was tested a few times throughout the first half but managed to deny Celtic again and again until half time.

They came out for the second half stronger and in the 52nd minute Kirsty Deans went close after a lay off from Tori Sousa but her shot was deflected into the arms of Megan Cunningham.

Amy Gallacher fired wide twice in quick succession before Deans rattled the Celtic crossbar with a driven shot inside the box.

Mulvey grabbed her second in the 77th minute when she stabbed home a Joanne Paton cross and with the game in the final few seconds lobbed McNicoll to complete her hat-trick.

The side now travel to face Spartans next week and Nisbet reckons there were positives to take ahead of preparing for next Sunday.

“I wasn’t too disappointed with the actual performance of the team as I felt we competed well and posed a threat going forward. Lapses in concentration and remembering the game plan have cost us and that’s down thing we will work hard to resolve for this week’s game. There were a lot of positives to come from the game at the weekend so we will take them and look to improve for the trip to Spartans.”