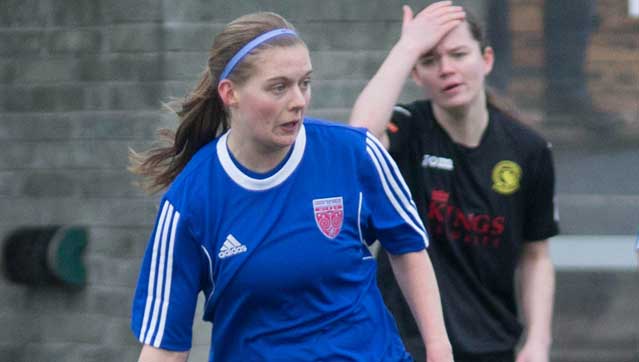 Kirsty Deans has spoken of her delight to join a club that has as much talent as Forfar Farmington has and hopes she can make a big impression.

The 24 year old midfielder signed from Inverness City early last month and links up with fellow ex-City teammates Julia Scott and Megan McCarthy as the side aims to reach the top five of the new slimmed down Premier League.

Having spent her entire career at City prior to this season, Deans admits that at first she was a bit unsure about leaving the recently relegated side to join Forfar but once she had trained with Mark Nisbet’s squad it was an easy decision to make.

Deans said: “It feels brilliant to have joined Forfar this season. They have a phenomenal set up and there is an exciting group of hugely talented girls at Forfar; I hope that I can learn a lot from them and develop as a player.”

She continued: ”When the opportunity arose to sign for Forfar I was very surprised and a little unsure of the prospect, however once I had been down a couple of times I knew that it was a challenge that I wanted to accept. Although the standard is very high, all the girls were so welcoming and that made the decision a lot easier.“

The Inverness based midfielder also believes that fellow SWPL1 teams will be shocked at the talent in the young squad and reckons they can use this to their advantage with some quarters seemingly writing the team off as heading for relegation already. “With only 8 teams in the league this year we are under no illusion that every game is going to be tough. Having had such a successful preseason, however, I feel we are more than ready to go and challenge any team in the league. With a great mixture of experience and youth in the squad I think the other teams will be very surprised with the quality we will bring and we will be able to use our ‘underdog’ tag to our advantage.”

“I am very much looking forward to the upcoming season and I believe we will really state our intentions from the start. We have set ourselves the target of a top 5 finish and I believe as long as we keep the intensity up we will be able to achieve this target. I’m very much looking forward to developing at Forfar this season and I hope I can help contribute to a successful season for Forfar Farmington.”

The team begin their competitive season this weekend with a visit to Hearts in the League Cup and Deans feels that if they can replicate their impressive pre-season form they will see themselves through to the next round.

“Next weekend at Hearts will be an exciting prospect to kickstart the season. If we are able to replicate the type of performance we demonstrated in spells this weekend I think it will be a successful day in the capital.”