Angus Foodbank – Our third nominated charity to receive £625. Delighted to assist at a time when many are suffering in different ways.
Pictured Norman Brown (Angus foodbank), and some players from U7s to U13s who were active during the event prior to our winter break. 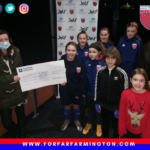 Voluntary Action Angus – Our second nominated charity to receive £625. Pictured Sam Senkel (Locality Worker) @volactionangus, and some players from U7s to U19s who were active during the event prior to our winter break.

After our successful fundraising efforts back in our first lockdown period in May 2020 we asked our members to get involved in some activity to walk, bike or run the distance to Hampden during May keeping them active and engaged with the club. We raised a massive £2500 and had hoped to have more of a hand over to our nominated charities however due to restrictions this has not been possible.
We were delighted to hand over £625 to Angus Young Carers,
Angus Carers Centre prior to our winter break. Pictured with Nicola McBride (Club Development Officer), Nicole Gibson (U15sNPL) and Heather Kilcoyne (Young Carer Group Worker) accepting the cheque on behalf of Angus Young Carers.
May 2020 Memories – #fclubroadtohampden 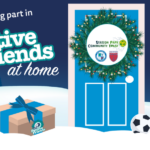 The clubs will be heading out into the community week beginning 21st Dec to deliver Christmas hampers to 100 locals who have likely had a difficult 2020 due to Covid19 and the associated restrictions.

If you know of someone who deserves a wee pick me up then please nominate them by completing this form.

We are looking for donations of food and toiletry items which can be dropped off at our training sessions at Market Muir Tuesdays 6-8pm , Wednesdays 4-8pm and Saturday mornings 10-12pm or contact any committee member or club coach. If we have surplus donations we will then drop them to another local worthy cause. Final date for donations is Friday 18th Dec
Thanks for your support.

We are delighted to announce our Xmas raffle where we have various items up for grabs from Scotland International Lisa Evans and her team mate at Arsenal Women, Dutch International, Vivianne Miedema as well as £100 Cash and Christmas hampers.   Knowing that we have run a very well attended Lisa Evans Soccer Centre here in Forfar since 2017, Richard and Kate Evans very kindly reached out to us with an offer of kit from their daughter Lisa and Vivianne.

Lisa is of course relatively local having started her football career in Perth with St Johnstone Girls, then playing for Glasgow City before signing professionally and relocating to Germany where she played for Turbine Potsdam and then Bayern Munich.  She signed for Arsenal Women in the FA WSL 3 years ago.  Lisa has won league titles in every country she has played.   A natural goal scorer she played with Scotland u17 & u19s before making her full international debut in 2011.  She has featured at the European Championships in 2017 and the World Cup in 2019 and has over 80 international caps already.

Vivianne has had an equally successful career to date having started off in her home country signing professionally with SC Heerenveen in 2011 at 14 years old,  before moving to Germany with Bayern Munich in 2014 where she first teamed up up with Lisa.  Vivianne moved to Arsenal Women in 2017 and keeps breaking records in the WSL where she has a record of almost a goal a game in her 88 appearances so far.  Internationally she played 15s, 16s, 17s and 19s for Netherlands, making her full debut in 2013.  She is her country’s all time record scorer having played in 2015 and 2019 World Cups and 2017 European Championships – Vivianne currently has 70 goals from 91 full international appearances and was nominated for the Ballon d’Or Feminin in 2019.

The club are delighted to welcome Steven Sim as the new Head Coach of our National Performance U19 squad as they gear up for the season ahead.
Hailing from Aberdeen, Steven has been involved in coaching for a number of years at schools, boys and girls clubs and is currently a coach at Sunnybank FC in the North Region junior league. He also runs his own Steven Sim Football Coaching classes for kids up to 12 years of age in the Aberdeenshire area.
#welcomesteven 💙

We welcome Lotte Deubel to the team. Lotte comes with a 1st Class BSc Hons in Sport & Exercise Science and extensive experience and knowledge in this area as a qualified Personal Trainer and owner of Lotte Deubel Fitness. We are delighted she is to be working with the teams this year, having been a player at the club for 3 seasons she is well known to both squads and everyone is looking forward to working with her.

Lotte commented, “I hope to learn a lot from the position too, working with players at the top of their game.” 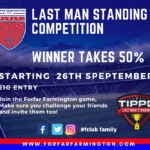 Fancy yourself as a top manager or indeed a pundit? Now’s your chance, for a one off payment of £10, in our fun last man standing fundraiser!

Our competition will be based on the English Premier league matches and will commence weekend of 26th September – We will give the winning player half the takings!

To enter please download via the App – TIPPD, Last Man Standing which is available for iPhone and Android or simply go into the link and Join the Forfar Farmington game……………make sure you challenge your friends and invite them too!

Payment can be made via our PayPal link – please ensure that payment is made at the same time as joining the game on.  When making the payment can you also add your full name in the “add a note” section so we can tie the names up against the app.

For those not familiar with LMS, our rules are as follows -these can also be read in the “Help” section of the app/site

Delighted to announce new signing Lauren Perry subject to International Clearance.  19 year old Lauren, a goalkeeper who has made 6 appearances for the NI national team, most notable ‘Player of the Match’ in her debut against Norway. Lauren, who has UEFA Champions league experience and comes from playing in the WSL 2 with Blackburn Rovers.

Head Coach Ryan McConville comments “I am delighted to finish off our recruitment drive with such a talented signing, Lauren is a GK with so much talent and experience for such a young player, she is a fantastic shot stopper and is a real modern day GK being good with her feet. We have already one of the best GK’s in the country in Fiona McNicoll and a great up and coming GK in Beth Mowatt (U19s NPL). Lauren adds to the quality in this department and now our squad has strength and depth all over the park, I can’t wait to welcome her to Station Park.”

Delighted to announce our 5th new signing over the last few weeks as Lisa Ryan comes into the squad subject to International Clearance.
25 year old Ryan started her football at Sunderland Regional Talent Centre where she had 8 successful years before moving into the reserve team, becoming the youngest member of the senior FA WSL squad. Lisa moved to the states to complete her education and played for Franklin Pierce University for two years, then transferred to University of Arkansas. The County Durham-local graduated with a Bachelor of Fine Arts Degree with an emphasis in Graphic Design.
No stranger to elite football, Lisa was recruited to play WPSL football for FC Indiana who had won two national titles. Ryan then signed for the Blades from Little Rock Rangers, a WPSL club based in Arkansas, prior to signing for Sheffield United.
Head Coach Ryan McConville is looking forward to welcoming her to Forfar – he commented “I am delighted to have the opportunity to welcome a player of her calibre to the squad”