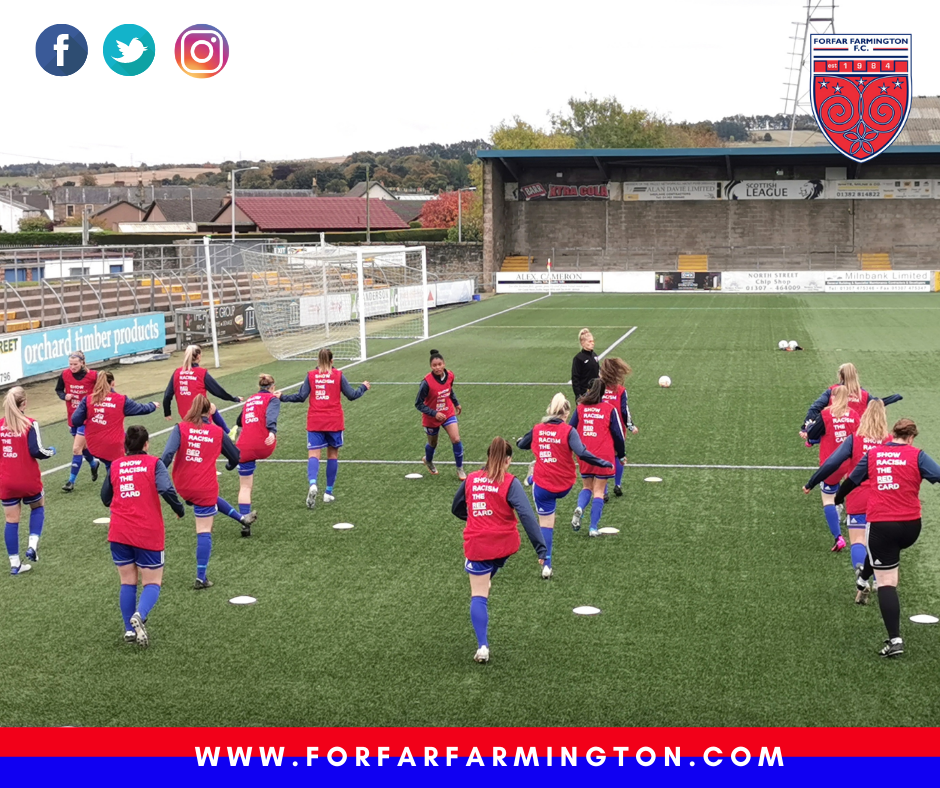 Forfar Farmington got off to the best of starts with a 4-2 home win against Motherwell in the SWPL1. Braces from Donna Paterson & London Pollard were enough for Farmington to come out on top in this opening day fixture.

The hosts were on the ascendency straight away & took the lead with the game just under a minute old, Cassie Cowper got into a fantastic area on the left hand side before sending a lovely ball into the box which troubled the Motherwell defence & there was Donna Paterson to guide home a glancing header beyond Khym Ramsay in the Steelmen goal.

Motherwell got a few words of constructive criticism thrown at them & it returned a response with more of an urgency to get back into the game, they had a shout for a penalty turned down by the referee alongside a Chelsie Watson free kick forcing a good catch from Lauren Perry.

The midway point of the 1st half was a bit tepid however Forfar stepped it up a gear before half time adding a 2nd goal on 38 minutes, Charlotte Gammie got clear of her marker before playing a very good ball into London Pollard who beat Ramsay & Lauren Gallon before tapping the ball into an empty net. Happy 16th Birthday indeed!

Motherwell weren’t going to give up though & pulled a goal back before half time with a corner from the left not dealt with & there was Gallon who struck home into the top left corner despite the efforts of a packed Farmington defence.

Those watching the live stream will no doubt be singing the praises of Pollard & Donna Paterson with the latter especially being a massive asset for Farmington, on 52 minutes a fantastic run into the area saw her get tumbled inside the area by Natasha Roberts with the referee pointing to the penalty spot, Paterson got herself up before calmly finding the bottom left hand corner from 12 yards to double Farmington’s advantage.

Cheryl Kilcoyne came on in the early exchanges of the 2nd half & was a positive in the Farmington performance giving Motherwell lots to think about, a good ball from the midfielder found Pollard who slotted home beyond Ramsay to make it a 2nd for the day alongside Paterson.

It was another set-piece which led to Motherwell adding a 2nd with another ball into the box not being dealt with & there was Gallon to scramble the ball home. Time was on the essence for the visitors though & a stabilised final 15 minutes was enough for Forfar to come out on top.

A fantastic team performance with London Pollard & Donna Paterson getting the plaudits for the goals however Cassie Cowper was solid & vocal in her role as captain and the defensive line dealt with any Motherwell attack the majority of the time.

Billie Simpson was consistent as always & Charlotte Gammie gave 100% as usual with the subs also making a difference and a competitive debut for Erin Rennie & Aimee Anderson who contributed to the team as well. A good day’s work however plenty for Ryan McConville & the coaching team to work on too. Jade Lindsay & Kirsty Fraser are forming an excellent partnership at the back which was evident in stages today.