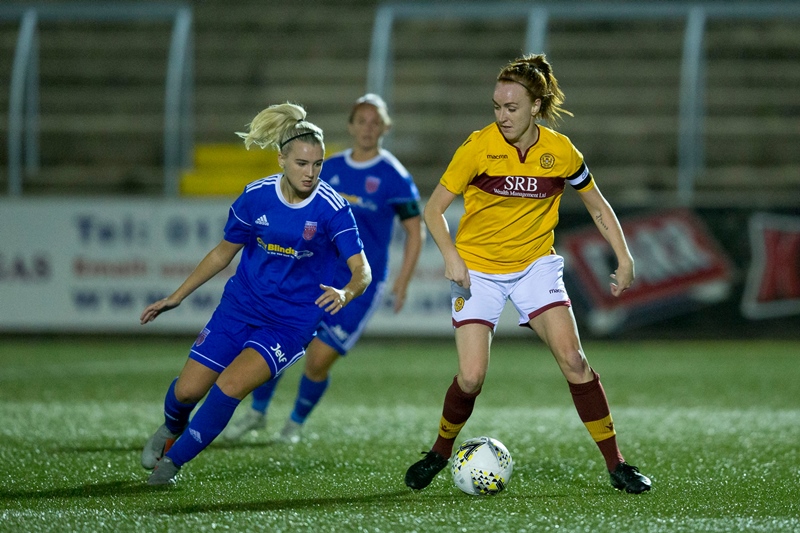 The last time these two teams met in Forfar there was a dramatic end to the game – last night was no different however Motherwell took all 3 points this time after a late penalty in front of a record crowd of 423 at Station Park, in front of the live BBC Alba cameras.

Six minutes were left on the clock when McNicoll in the Farmington goal was adjudged to have clipped Gardner for the foul – from the stands it looked a definite penalty but it was certainly not so clear cut from the TV angle – however Motherwell skipper Montgomery stepped up and confidently slotted home.

As expected, after two close games previously between the sides, the game started off with both teams trying to assert themselves without creating too much in the way of chances. There was a goalmouth scramble in the Forfar box in 7 minutes with Kilcoyne clearing the shot away from danger.  Motherwell had a couple of long range efforts and crosses which was a feature of their game in both halves, all confidently dealt with by McNicoll.   Farmington’s first real chance came on 21 mins when a Davidson corner was headed just over by the stretching Patterson.   Three minutes later a Davidson free kick was scrambled away from the Well box   A good 1-2 down the Well left saw McNicoll push the resulting shot round the post for a corner.

Farmington were dealt a blow on 31 minutes with Dempster unable to shake off a calf knock and she was replaced by McSherry up front.  She was almost immediately in the action after a great Cook run down the right, cutting inside to square to McSherry and Shillitto with neither able to take advantage.   Motherwell went close when Mceachran cut inside from the left and her shot clipped the outside of the far post.  Just before half time, Kilcoyne made a surging run down the Forfar left before being fouled 22 yards out on the angle of the box – the resultant free kick from Davidson was put over the bar.

The second half continued in much the same vein with Motherwell testing McNicoll from distance and some dangerous crosses into the box.  Farmington’s Cook suffered a head knock on 48 minutes and with blood coming from her nose, she was off the park for fully 5 minutes before being able to carry on. She could only manage another 7 minutes though before Debio came onto centre midfield.   Kilcoyne cut in from the left again before firing past the Well post with the visitors putting a free kick into the side netting on 70 minutes.   White replaced Kilcoyne with 15 minutes left as three Farmington players struggled with cramp.   A diving header from Motherwell went narrowly past before an ambitious drive from 40 yards was tipped over by McNicoll.

With the game heading for a draw and a vital point for Farmington, the defining moment came on 84 minutes with Well taking the lead from the spot.   Glennie was immediately brought on up front for Cattanach as Farmington tried to snatch an equaliser but it was not to be and a disappointing end result.

The club would like to thank all 423 who attended the match, including many of our sponsors who support the ten Farmington teams and SWPL players.