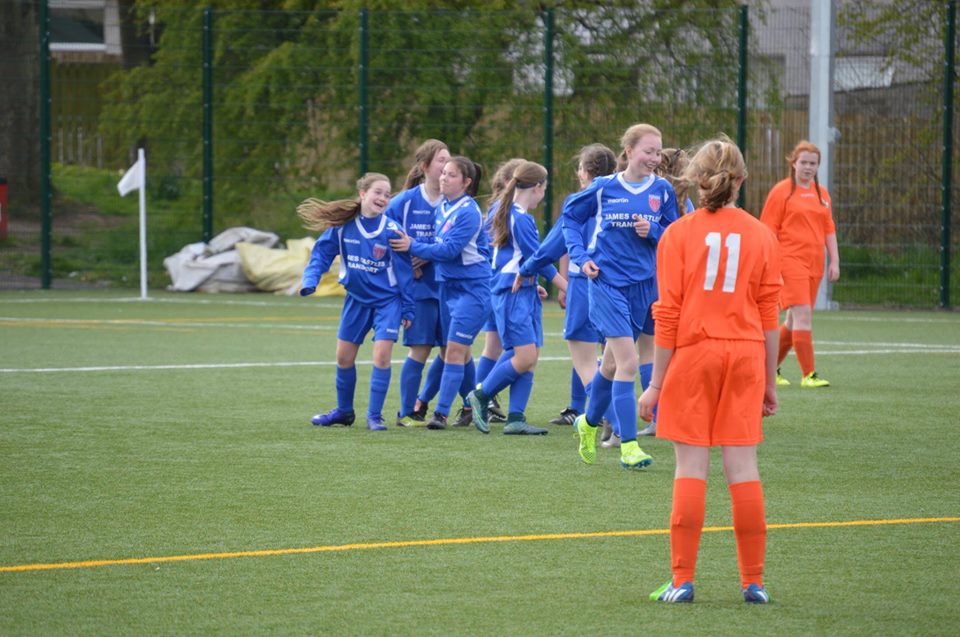 The journey up to Perth for Forfar Farmington 15’s latest league match against Letham proved to be a fruitful one as it saw the girls put in a powerful performance. The Forfar girls kept possession of the ball very well and their ability to attack at speed to exploit the high line of their opponents defence saw them achieve a convincing victory.

The match began with our girls keeping the ball in their own half however within 5 minutes the first goal arrived when Katie White broke through the left-hand side of the Letham defence to slide the ball into the net. A similar break, this time on the right side of the pitch saw Taylor Clifford with only the keeper to beat which she did with a fierce drive from close range. Forfar then placed the Letham defence under severe pressure however their keeper made three excellent saves in quick succession to keep them at bay.

The pressure paid off for Forfar however when some neat interplay from a corner between Philippa McCallum and Rachel Robbie saw Rachel place a beautiful drive that flew in to the far corner. Letham were undeterred however at this early setback and they nearly pulled a goal back when their striker hit the post from close range and then the same player forced a great save from AJ Meach. The space at the back afforded to the Forfar attack was then utilised again by Neve Simpson who outstripped the Letham defence and then round the keeper to score. A beautiful corner taken by Kacey McCabe was met first time by Aimee Robertson who from close range placed a volley high into the net to add to the scoring.

Neve Simpson’s athleticism and timing set her up for three goals in quick succession, the best of which saw her beating two defenders and the keeper before passing the ball into the empty net. Philippa McCallum then scored an absolute peach of a goal when she picked up a ball from Melissa Coull to fire an unstoppable first-time strike high into the near post corner – tremendous technique to score such a goal. Philippa then scored her second when she fired home a loose ball that the Letham defence didn’t manage to clear. Neve Simpson then bagged her fifth of the game when a lovely through ball from Neve Guthrie put her through on the keeper to then fire home.

Niamh Henderson pounced on another loose ball to hit a powerful strike in off the underside of the bar and the passing play was further in evidence when Aimee Robertson threaded a beautiful pass across the face of the box to Rachel Robbie who fired in a first-time left footed strike that whizzed past the keeper. Taylor Clifford then bagged a hat-trick with two beautiful goals to add to her first half strike and Melissa Coull brought the the scoring to an end when after being thwarted on a number of occasions by the Letham keeper she made no mistake to calmly pass the ball into the net to finally bag a goal.

Lots of goals throughout the team against a dogged Letham side who worked very hard for each other however the passing play, possession and ruthlessness in front of goal by the Forfar girls proved to be very impressive and a challenge to contend with on the day for their opponents.