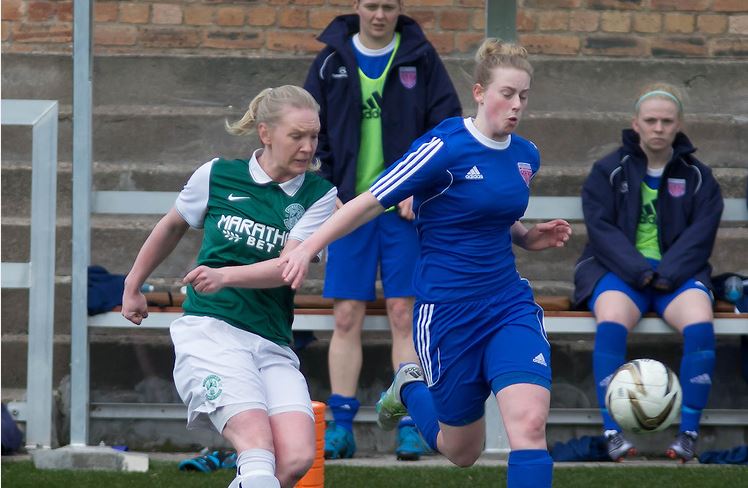 Forfar Farmington crashed out of the Scottish Women’s Premier League Cup quarter finals after a thumping 6-0 defeat at home to Hibernian.

Mark Nisbet’s side struggled to cope with the slick movement and passing of one of the league favourites and a side who shall be in the Champions League later in the year.

Following Robyn Smith’s red card being reduced to a yellow card, one change made from the defeat to Spartans with Louise Magilton being dropped to the bench in place of Tori Sousa.

Sousa had the first chance of the game when she flashed a shot past the post from the edge of the box in the first minute.

Hibs took the lead in the fifth minute following a run into the box from Lizzie Arnot; her low cross was diverted into her own net by the unlucky Jade McLaren.

It was two nil four minutes later, Rachel McLauchlan latching onto a loose ball before slotting home past McNicoll.

Former Forfar midfielder Lucy Graham went close in the 18th minute when she curled into McNicoll’s arms before she headed against the bar from an Arnot corner.

Heather Richards failed to threaten with her long range effort just after the half hour mark, firing straight at McNicoll.

The visitors added a third just two minutes into the second half; two former Farmington attackers in Caroline Heron and Abbi Grant combined inside the box to allow Grant to curl home.

Holly Napier threatened in a rare Forfar attack when Julia Scott’s short free kick allowed her to get a long range effort on goal that Jenna Fife had to be sharp to save.

Hibs made it four in the 65th minute; McLauchlan’s attempted cross deceived everyone and flew into the net for her second of the afternoon.

They were awarded a penalty four minutes later when Sophie Milligan was adjudged to have handled inside the box with Arnot stepping up to tuck away the spot kick.

Six minutes after the fourth goal they had made it 6-0; a loose ball fell to Chelsea Cornet and she rifled home from the edge of the box.

Farmington did have chances late on in the game and almost scored through captain Nicola Davidson; her free kick looked destined for the top corner until a great save from Fife denied her.

The side now have a three week break until their next game where they will also entertain Hibernian albeit in the league on this occasion.