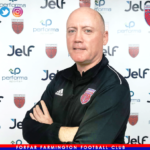 After a long 7 month lay-off due to COVID-19, Forfar Farmington are back in competitive action tomorrow afternoon hosting Motherwell at Station Park (2pm kick off).

Due to the current government guidelines, no spectators will be allowed inside Station Park for tomorrow’s curtain raiser with Forfar Farmington assistant coach Kevin McGreskin hoping FClub supporters tune in via the live stream to watch the game, “We have had a good response to our online stream over the past few friendlies against Dundee United & Aberdeen & hopefully they will continue to log-on to the stream for tomorrows match as well.

“The girls will go out & give their best on the day, Motherwell are a good side & they have a good manager in Eddie Wolecki Black whose been around the Womens game for years, Eddie will have Motherwell organised & tough to beat.

“I am looking forward to the game & so is everyone else around the club, it’s always good when a season gets underway, we’ve had a pretty decent pre-season & played some good teams but getting the competitive games going is what we’re after.

“It’s good to go through pre-season undefeated but that counts for nothing on Sunday afternoon, we’ve used pre-season to give players a run-out & give minutes to players that need it.

“It’s a good group of players here at Forfar Farmington, as a management team we are lucky to have that, we have brought in some new players & kept the players that have been around so we are gelling all the time.

“There’s a real positive vibe about the club now, there is competition for places in the team, they all work hard on the training ground & hopefully the spectators will see a good performance tomorrow.”