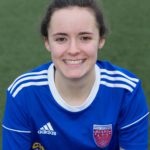 Cassie Cowper was awarded the captains armband by Head Coach Ryan McConville & returned the favour by leading Forfar Farmington out to a 4-2 victory over Motherwell.

Cowper showed her quality on & off the ball with excellent communication alongside the ability to defend and get an important 3 points in the opening weekend of the SWPL1 season.

The former Aberdeen full back spoke after the match, “It’s good to be back in competitive action again after a long time out due to lockdown, friendlies are good but it doesn’t beat competitive games, we managed to get some good goals & a good win with the only disappointment being the goals conceded.

“Donna Paterson has came back from lockdown really fit & that’s why she has been pushed into a midfield role, London Pollard is still young however you can see from the way she plays the game how good a player she is.

“We won our battles, we were gutted to concede 2 goals, it was sloppy marking however it’s something for us to work on.

“It’s good that Head Coach Ryan McConville has acknowledged that I have put in the hard work & the girls can listen to me, Ryan has recruited well during pre-season & it’s good to get some competition to the team & Kevin McGreskin has been a good addition to Forfar & hopefully they both stay for a long time.”