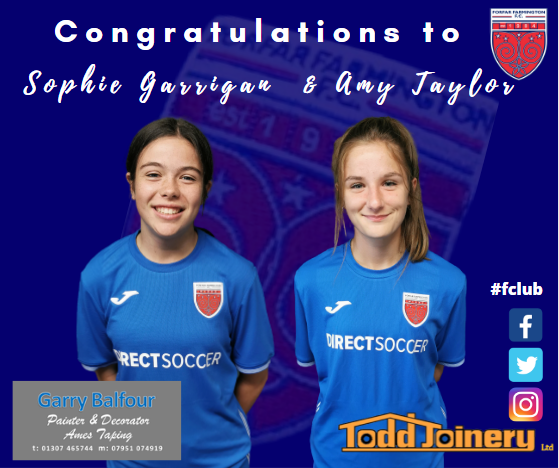 Congratulations to Sophie Garrigan and Amy Taylor who have been selected to join the 2022 SFA East Region U16 Performance Squad.

Sophie in her 10th year with the club, enjoyed being part of BGC Scotland squad in 2019 that traveled to take on their Welsh counterparts. Coach Ian McDiarmid said “Sophie is a dedicated hard working and talented player who deserves this opportunity with the East Region programme.  As a predominately right sided full back, Sophie can play anywhere in the back four.  Working with experienced coaching staff within the programme will ultimately take her game to the next level”.

Amy who has been with the club from age 8 coming through our juniors, was recently selected for the East Region Scottish Schools Football squad and played an inter-association match last week v West of Scotland at Toryglen.  Amy has previously been a recipient of Player of the Year for her efforts on the pitch. Coach Scott Gibson was delighted to hear of her success “Having coached Amy from a young age, she has talent and great to see her progress to this level and be given the opportunity to be part of the U16s East Region squad”.

The performance squad programme will begin in February 2022, as additional sessions to their club training and games, the programme offers the girls the chance to attend National training camps in turn then with the chance of selection for the Scottish National Youth squads. Something I’m sure the girls will dream about.

The girls were not alone at the trials, we had number of girls take part in the trails and would congratulate them for being identified by their coaches and although they may be disappointed we hope they enjoyed the opportunity, keep working hard and enjoying your game .