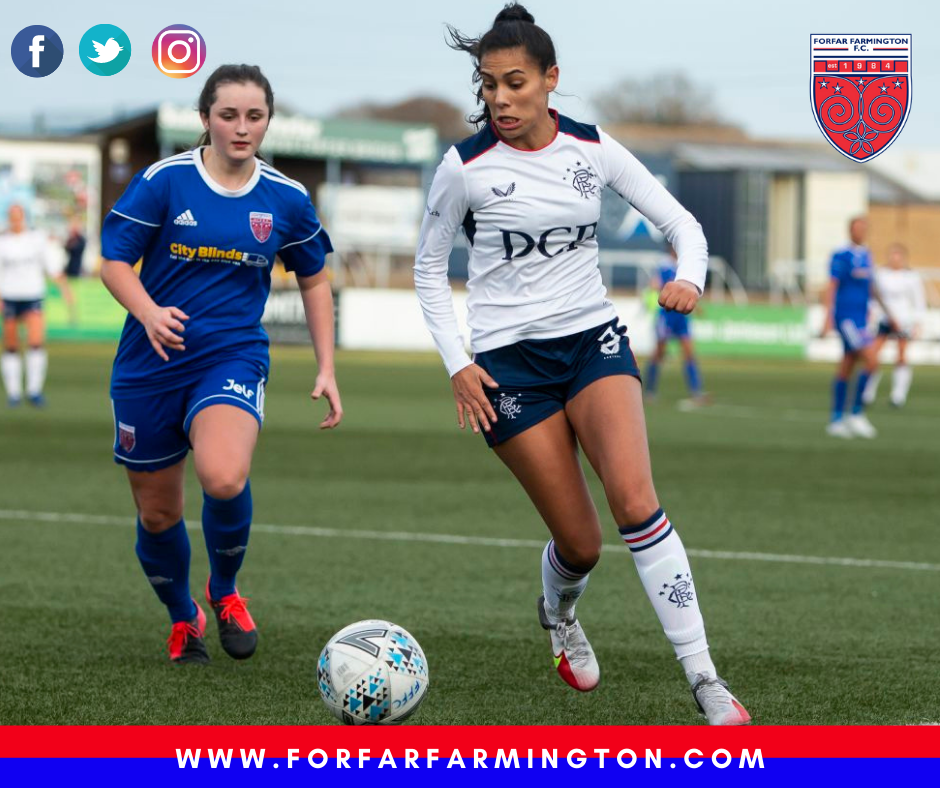 Forfar Farmington were on the wrong side of a 3-1 score line however the hosts can hold their heads high after putting in a battling performance with the 3-1 scoreline making it look more harsh.

Aimee Anderson, Erin Rennie & London Pollard came back into the starting XI for Farmington with all 3 players playing there hearts out with all 3 players concerned not even 18 yet up against players who have experience like Emma Brownlie & Nicola Docherty.

It was a fairly quiet start to the match with neither side having any real opportunities in the opening 15 minutes of the match, Forfar were on the ascendency early doors however never threatened Jenna Fife or the Rangers backline.

Rangers took the lead just after the 15th minute mark, Brogan Hay drove down the right flank before delivering a great ball into the box which Jade Lindsay got a touch & unfortunately went into the back of the net, heart breaking for Lindsay who would recover by giving her heart & desire to the FClub cause.

Kirsten Reilly had an opening to double Rangers’s lead met by Fiona McNicoll in the Farmington goal whilst at the other end London Pollard was through on goal but a good save by Fife denied the forward.

Rangers were awarded a penalty on 34 minutes after Ness was brought down in the box, up stepped Arnot whose penalty was saved by McNicoll but the midfielder reacted quickest at the rebound.

Donna Paterson then reduced the leeway for the hosts with a stunning effort into the top corner from the edge of the box for her 7th goal of the season.

Gaffer Ryan McConville took off Aimee Anderson at the interval for Alana Bruce with Cassie Cowper pushing up the park, Forfar enjoyed a good spell of the ball as did Rangers in the 2nd half.

A good ball by London Pollard midway through the half found Billie Simpson who caused Rangers problems at the back however her effort was blocked, Simpson put in a power of work up top for Farmington & was unlucky not to see the back of the net.

Simpson also tried an ambitious effort with time running out which went wide, London Pollard also deserved a goal for her efforts but a good save by Fife denied the striker.

Rangers added a 3rd goal in added time when Claire Gemmell curled an effort into the top corner from the edge of the box, Well done to Rangers on the victory.

Forfar Farmington put in a power of work on the park in front of the BBC cameras and on another day could have turned that defeat into a more positive result. The club is going in the right direction under the teacher that is Ryan McConville however not getting the rub of the green at the moment with regards to positive results.

The resources of clubs like Rangers far outweigh what Farmington have available at the minute and for all 16 players featured, they all did there bit for FClub.

Although the game was behind closed doors, it was good to see Hannah Stewart & Leah Fleming back in to support Farmington alongside goalkeeper Lauren Perry who is on the mend after her collision last week.