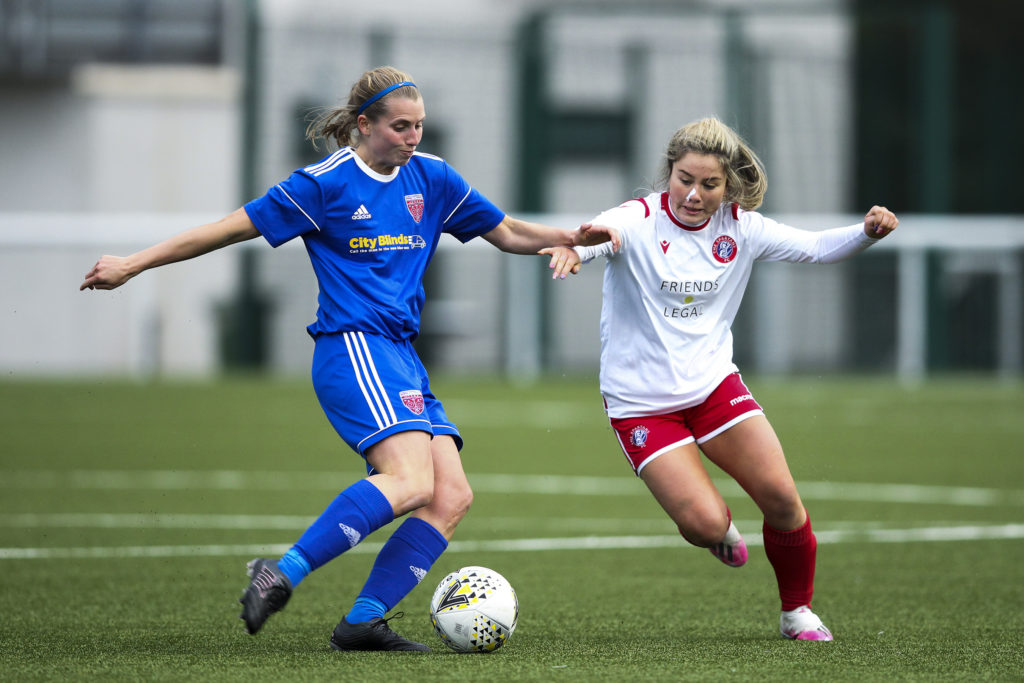 Spartans beat Forfar Farmington 1-0 thanks to a 76th minute winner by Becky Galbraith, Spartans were the better side over the proceedings however Farmington deserve a lot of credit for weathering the storm in large periods of the game, especially at the beginning of the game.

The hosts began the game with lots of possession eager to find a way past an organised Farmington backline, opportunities were few & far between however with a lot of shots from Spartans going over the bar.

Farmington had to weather the storm for a good 12 minute period at the start of the game not through making goalkeeper Lauren Perry work hard but for finding the correct channels & some good interchange play, whenever an opportunity arose at goal however it came to nothing.

Midway through the half, Gaffer Ryan McConville kept the same shape however gave some coaching points during an injury when it was needed, it brought a response from Farmington,

A Cassie Cowper free kick found Donna Paterson however any chance to add to the scoring wasn’t forthcoming as the shot just went wide of the left hand post, an excellent ball down the left channel was then met by Charlotte Gammie who showed ambition by trying to find the net however the effort just went wide.

Spartans saw a lot of free kicks towards the end of the 1st half & an undeserved booking for Kathryn Pender who saw a yellow card for a perfectly timed tackle in the hosts half. Maybe it was the force of the challenge which led the referee to reach out a card but it was a good challenge irrespective which irked a few in Blue.

Farmington showed a lot more positivity at the beginning of the 2nd half, Spartans were still a threat however a bit more belief saw them play better exchanges of football.

McConville made 2 subs on 59 minutes with Eirinn McCafferty & Charlotte Gammie coming off for Erin Rennie & London Pollard, the latter almost made an instant impact having been sent through on goal however her close range effort just whisked wide of the left hand post.

Lauren Perry was then on the wrong end of a nasty collision with a Spartans player midway through the 2nd half who was brought off & replaced by Fiona McNicoll with the Spartans player only getting a booking when there was a very good case for a sending off.

Spartans took the lead after 76 minutes, a great ball came in from the right channel and there was Becky Galbraith to guide the ball into the net. Through looking at the Spartans online footage, there is question marks with regards to the ball crossing the line however Spartans showed plenty of positivity in their play as did Farmington & the former showing a grittiness to get the lead.

The goal brought a response from Farmington as they showed a clear intent to try & get back into the game, Erin Rennie played a lovely ball which was met by Pollard however the shot went wide.

It’s a frustrating one for all at Farmington however well done to Spartans on their win, it will be sore at the moment however it’s been a really good start to the season & the players & management will learn from the experience.