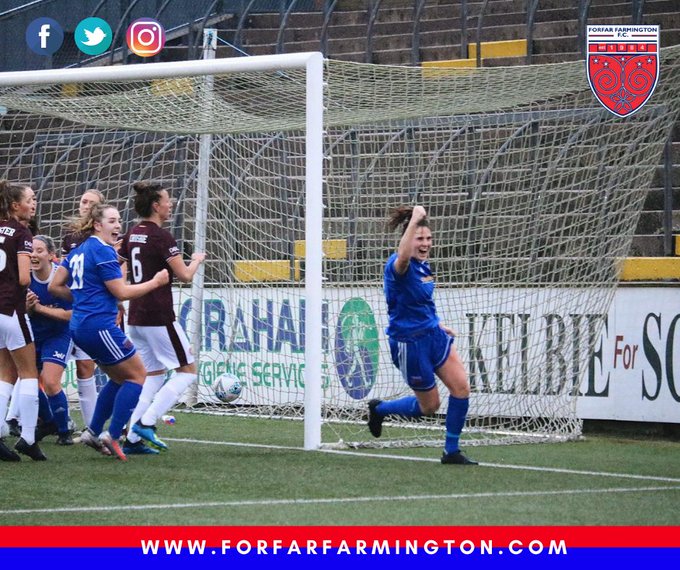 A Donna Paterson hat-trick was enough for Forfar Farmington to come out on top in this afternoon’s SBSSWPL ensuring a good afternoons work for Farmington with a clean sheet to match in what was a consistent performance from the whole team.

Forfar started the game on the front foot with a couple of opportunities to get an early lead, Cheryl Kilcoyne finding Donna Paterson whose effort was held by Kendall Welsh in the visiting goal. Billie Simpson also had a deflected effort which was gathered up with ease by Welsh.

Cassie Cowper then found London Pollard in a dangerous area who switched across to Kilcoyne however the forwards effort with the Hearts defence evaded went wide.

There was plenty of attacking intent from the hosts & the goal wasn’t far away & Donna Paterson maintained her fine run of goalscoring form on 22 minutes with Cowper picking up her 3rd assist of the season already finding Paterson whose header went past Welsh in the Hearts goal Paterson meeting the ball with precision & giving the Hearts backline no chance.

Paterson picked up her 2nd goal on 33 minutes with Forfar continuing to play some good, positive exchanges of football before the ball broke to Aimee Anderson who instead of working her way into the box played the ball short to the defensive midfielder whose fine effort crashed off the crossbar & into the net.

Forfar set out on the ascendency at the start of the 2nd half with London Pollard playing a fantastic ball down the right channel trying to find Charlotte Gammie however it proved to be too ambitious a ball for Gammie to try & get on the end of.

The 2nd half was stale compared to the 1st half however the hosts kept it tidy across all areas of the park with Hearts struggling to get a foothold on the game, the hosts always looked dangerous especially at set-pieces with Cassie Cowper driving some fantastic balls into the area.

In terms of intensity levels, it was nowhere near the levels of the 1st half with both sides making changes at various stages in the half, Hearts enjoyed a good period in the midway point of the 2nd half where they got into good area & rustled up chances however it was a solid afternoon for Lauren Perry & the backline.

Farmington made it 3-0 on 82 minutes after a great ball came in again from the right by Cowper which forced a stramash in the penalty box before Donna Paterson fired home just passing the goal line. That’s 4 assists for Cowper & 6 goals already this season for Paterson.

Overall, a fantastic afternoon’s work for all connected to Forfar Farmington & another good 3 points, Hearts proved to be tough opposition for Farmington however & the tough games come thick & fast with Spartans away next weekend.