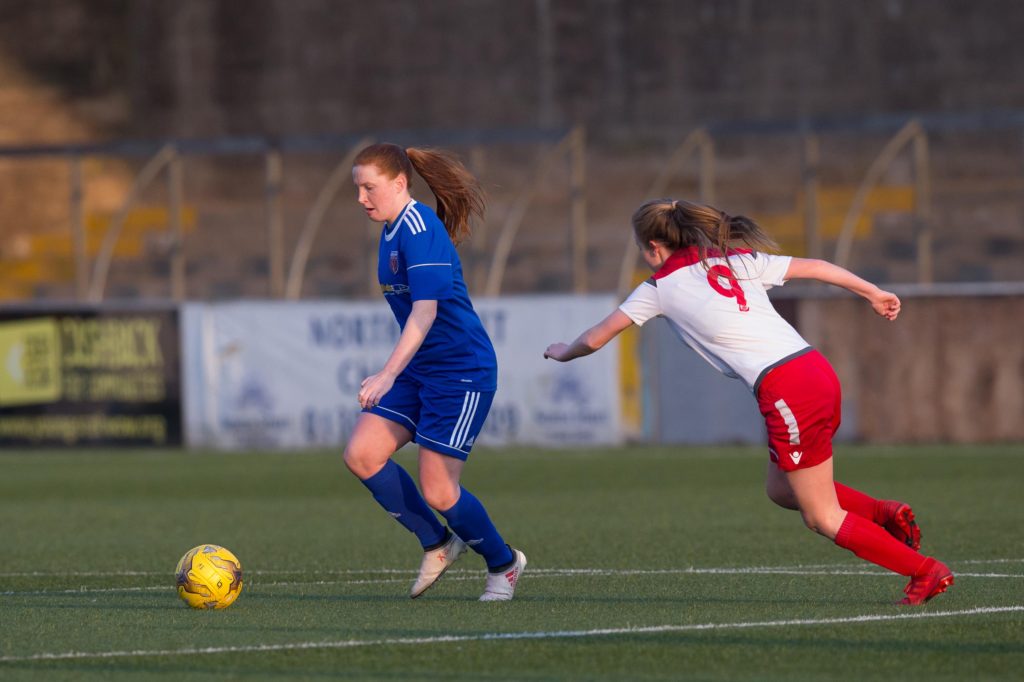 Forfar Farmington were defeated 2-0 by Spartans under the floodlights of Station Park on Wednesday in the SBSSWPL1.

An excellent free kick from Michaela McAlonie in the first half and a late and controversial penalty netted by Kaela McDonald-Nguah gave the visitors all three points in a tight game.

Beth Shillitto and Ashleigh Smith were also called up from the SWFL2 team as Stevie Baxter aimed to take all three points.

The hosts started off well and had the first opportunity after three minutes when Danni McGinley sent her shot just past the post.

Spartans were awarded a chance six minutes later as Leah White fouled on the edge of the box; Michaela McAlonie stepped up to curl home a brilliant free kick past McNicoll.

Farmington looked to come back from this early blow with Hannah Stewart sending an effort into the grateful arms of Rachel Harrison.

Kaela McDonald-Nguah split the home defence in the 13th minute with a ball that allowed Louise Mason to go one on one with Fiona McNicoll and the attacker probably should have done better as she blasted wide.

She almost went one better eleven minutes later when a long range strike was palmed over by McNicoll.

McNicoll was called into action again when she punched away a McDonald-Nguah lob.

Stewart and McGinley linked up well in the 39th minute as the former sent the latter in on goal but Harrison did well to block the shot.

Alana Bruce tried her luck from distance a minute later but couldn’t find the target; the last action in the half fell to McDonald-Nguah as she headed wide after meeting a cross.

Both sides were matching each other well in the first half with only a stunning goal the difference between the sides.

The second half was much the same as both sides battled hard in the sunset at Station Park.

Stevie Baxter made an early change as Beth Shillitto made her first appearance at a Premier League level since March 2018 replacing Lotte Deubel.

The visitors’ Katie Frew fired wide in the only effort of the half’s first quarter of an hour.

Zoe Johnstone thought she had added a second for Spartans from the edge of the box in the 66th minute as she beat Fiona McNicoll but her shot hit the crossbar before a goal kick was awarded.

Midfielder Beth McPherson tested Harrison shortly after from 25 yards as Farmington hunted for an equaliser but it was the visitors who were to seal all three points with a controversial penalty.

With sixteen minutes remaining McNicoll beat away a Beth McKay shot and when Frew attempted to control the ball, Katie Hassett got a challenge in and won the ball cleanly. Despite this, referee David Fearn awarded a penalty to the visitors.

The visitors shut up shop after this with the closest anyone came to something resembling a shot was Hannah Stewart’s free kick that was easily held by Harrison.

The result means Farmington stay seventh for now with a tough clash with Hibernian ahead of them this weekend but Baxter can be pleased with his side’s performance in what was a tight game.