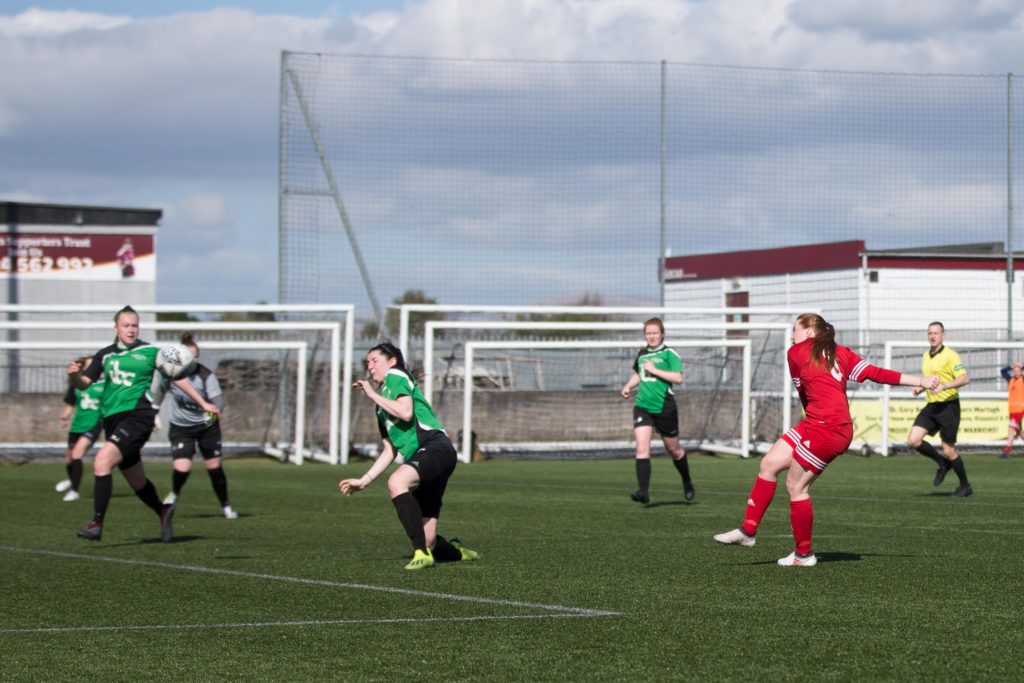 Forfar Farmington were unlucky not to take all three points at Ochilview on Sunday as they drew 1-1 with Stirling University.

Despite going behind to Demi Falconer’s first half opener, Hannah Stewart netted an equaliser midway through the second half for Stevie Baxter’s side.

Cheryl Kilcoyne had an early opportunity from long range but couldn’t find the target in the first 90 seconds.

In the 16th minute Danni McGinley was inches away from connecting with a cross and moments later she fired into the arms of Chloe Logan.

McGinley had the ball into the net in the 27th minute when she swept home Hannah Stewart’s cross but the referee ruled this out for offside; footage showed this may have been a harsh decision.

Logan was quick to gather another Stewart cross with Smith lurking while at the other end Stirling’s first chance came from Lauren Doran-Barr who was one on one with McNicoll but failed to beat her with her shot.

Donna Paterson fired low and wide in the 34th minute and five minutes later the deadlock was broken by the hosts; Ciara Bonner’s corner fell to Demi Falconer who netted despite the efforts of Cassie Cowper on the line.

Farmington came out for the second half looking for an equaliser and came close seven minutes after the restart as Paterson headed wide from a Smith free kick.

Abby Callaghan found herself with just McNicoll to beat in the 55th minute for Stirling but after nipping past her the striker’s shot was cleared by the retreating Alana Bruce.

Stevie Baxter’s side started to turn up the pressure with Stewart seeing her strike palmed wide by Logan; the resulting corner found Paterson but her header was deflected past the post.

Beth McPherson nodded over from a McGinley cross before Paterson again missed the target when a Smith free kick fell to her.

The hosts were eager to find a second goal to relieve the pressure as Bonner swung in another corner but Naomi Welch blazed over the bar.

Farmington levelled things up in the 67th minute from a goal kick; McNicoll’s quick pass allowed Paterson to send a defence splitting ball through and after flicking the ball forward, McPherson looked nailed on to net her first goal for the club but felt Stewart was in a better position to score, squaring it for the attacker to rifle into the back of the net.

Alana Bruce tried her luck from distance shortly after but her dipping strike landed over the bar before McPherson failed to beat Logan.

Stirling sub Kim Guthrie struck straight at McNicoll as the game edged closer to full time with Forfar still looking the more likely to find the winner due to their momentum but the hosts were tough to break down.

The final opportunity of the match came to Farmington again with Hannah Stewart’s late corner inches away from Paterson who rose highest in the awaiting pack of players in the box.

Farmington come away from Ochilview with a point but Stevie Baxter and his players can count themselves unlucky not to take away all three following the second half.

Another positive from the game was Katie Hassett making her SBSSWPL1 debut after impressing while playing for Jeff Rioch’s side in SWFL2.