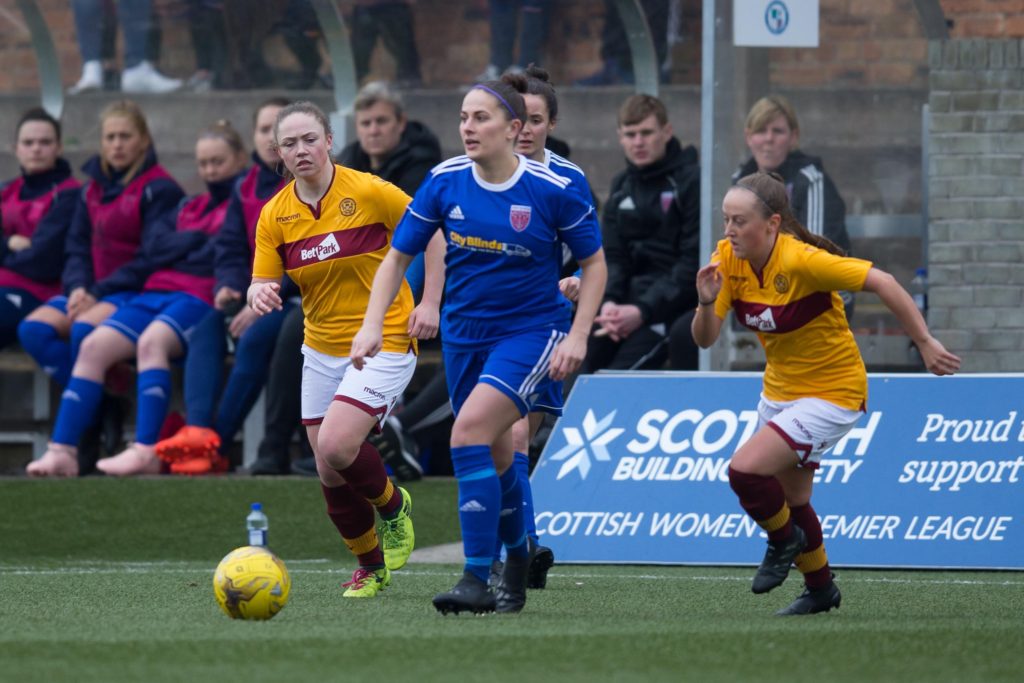 Forfar Farmington advanced to the quarter final stage of the Scottish Women’s Premier League Cup with a 2-1 win over Kilmarnock on Sunday.

After a goalless first half, Cheryl Kilcoyne and Danni McGinley had Farmington at ease but Samantha Hare made things uncomfortable in the last five minutes.

Stevie Baxter was forced into one change from the win over Motherwell as Donna Paterson failed a late fitness test and was replaced by Kilcoyne for her first appearance of the season.

Hannah Stewart had the first chance of the afternoon after two minutes as she fired into the arms of Lauren McGregor from Nicola Davidson’s free kick.

Eight minutes later Stewart turned provider as a well timed pass found Robyn Smith and she controlled the ball before firing over.

Kilmarnock should have had their first shot on goal in the 16th minute as the ball fell to Kirsty Munro on the edge of the box but she mistimed her effort resulting in a fresh air swipe and Farmington cleared their lines.

Smith saw a shot deflected into McGregor’s arms while at the other end Colette Fleming and Lisa Swanson failed to threaten Fiona McNicoll.

In the 28th minute Cassie Cowper almost found the net directly from a corner as it deceived everyone bar the defender on the line who cleared well.

A minute later Aimie Docherty fired at McNicoll from the edge of the box before Fleming sent a volley on to the roof of the net.

Stewart was involved again for Farmington; firing wide from 20 yards shortly before Nicola Davidson failed to find the target from Cowper’s corner.

The final action of the first half came from another Cowper corner as Kayleigh Brough looked to have been shoved but referee Kevin Higgins waved away appeals for a penalty.

Farmington came out for the second half eager to take the lead with Cowper firing at McGregor 24 seconds after the restart and less than a minute later McGinley curled past the post.

Smith sent an effort wide after latching on to a McNicoll long ball before Cowper was unlucky not to find the back of the net in the 48th minute; Davidson’s free kick finding McGinley and she flicked the ball on for the former Aberdeen player to head wide from close range.

The deadlock was finally broken six minutes into the second half when Beth McPherson slipped the ball through to Cheryl Kilcoyne and she weaved her way to some space before stroking home for her first of the season.

There was another first goal of the season for Danni McGinley after 55 minutes; a Cowper corner flew over the heads of everyone and Davidson collected the loose ball before swinging in a cross that wasn’t cleared and McGinley volleyed past McGregor to double the advantage.

Smith was eager to get her first competitive goal of the season as well but was unfortunate not to score as she hit the side netting shortly before firing over from close range under pressure.

The ball was in the net again when Smith sent in a cross for Stewart to tap in but the assistant referee had adjudged her to be offside.

Davidson sent a free kick wide of the mark in the 77th minute, however seven minutes later Farmington were made to sweat as Samantha Hare bundled home a Swanson cross.

Swanson almost grabbed a late equaliser to force the game into extra time in the 89th minute with a well taken free kick but McNicoll pulled off an impressive save to deny her.

The result means Farmington progress to the quarter finals of the SWPL Cup where they will face one of their league rivals with all SWPL1 clubs advancing.