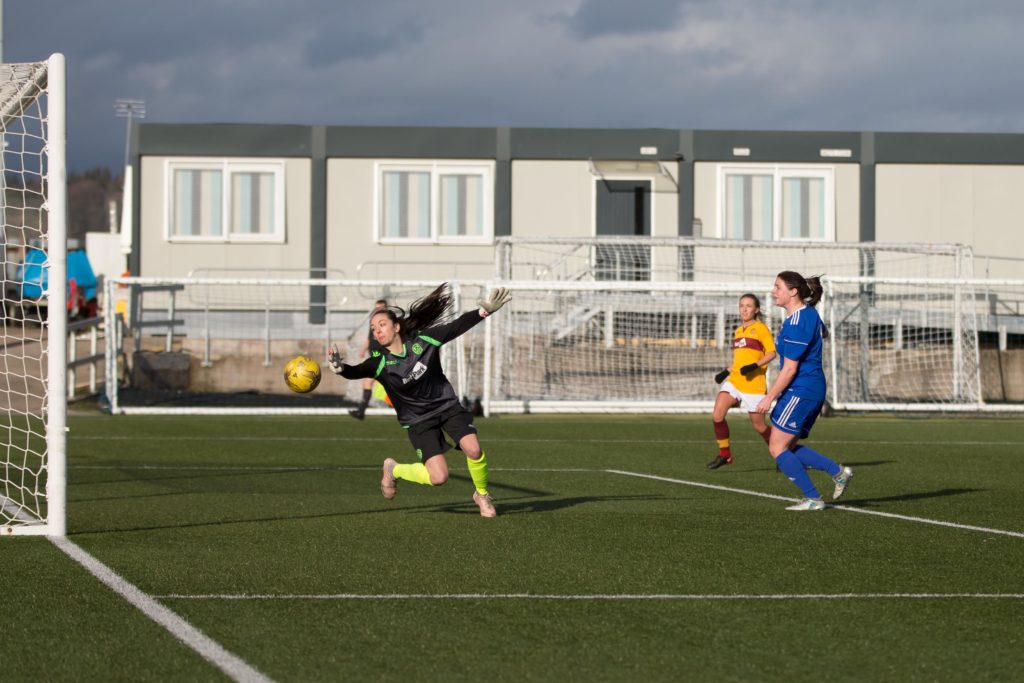 Forfar Farmington earned their first three points of the season on Sunday with a 3-2 win over Motherwell at Station Park.

A Hannah Stewart double along with Donna Paterson’s first Farmington goal was enough for all three points despite goals from Lori Gardner and Mhairi Fyfe.

Stevie Baxter made one change to his side following last week’s defeat to Celtic as Cassie Cowper came back from her suspension to replace Megan Robb.

Farmington started off well with Beth McPherson having a shot blocked in the first minute before Robyn Smith saw a 20 yard volley fly past the post.

The deadlock was broken in the tenth minute when a pinpoint cross by Erin Cattanach found Hannah Stewart and she fired home off the underside of the crossbar.

This goal seemed to spur Forfar on and they came close to a second just sixty seconds later; Danni McGinley’s shot took a touch off a defender before going out for a corner.

Shortly after Morgan Hunter pulled off a magnificent save to tip Donna Paterson’s close range header over the bar.

The visitors settled into the game and had chances of their own; captain Kerry Montgomery firing over from a tight angle before Sarah Crilly failed to trouble Fiona McNicoll with her effort, the keeper gathering easily.

Cassie Cowper volleyed over after some smart control but it wasn’t long before Farmington extended their lead.

After netting the first, Hannah Stewart was at it again in the 31st minute as she controlled a Kayleigh Brough ball before driving towards goal and curling a beautiful effort over Hunter for her and Farmington’s second.

Motherwell looked for something to take into the break as Georgie Rafferty blasted wide from distance while Lori Gardner forced McNicoll into a save on the stroke of half time.

The visitors kept up their efforts at the start of the second half; Montgomery denied by McNicoll after her long range effort was tipped over.

Chelsea McEachran fired over but Gardner went one better for Donald Jennow’s side in the 54th minute with a low effort that beat McNicoll and found the net via the post.

Two minutes later the two goal lead was restored as Nicola Davidson’s free kick just inside the Motherwell half found the unmarked Donna Paterson and her glancing header beat Hunter for her first goal in Farmington colours.

Paterson looked for her second and Farmington’s fourth in the 65th minute as she hit an ambitious effort from 35 yards but her attempt was wild and landed in the terracing.

Shortly after Kayleigh Noble fired wide and as the game entered the final stages Motherwell looked to add some pressure on in order to force their way back into the game and give themselves hope of getting something.

Rafferty and Rolph failed to trouble anyone with speculative long range strikes and sub Mhairi Fyfe should have reduced the deficit when Montgomery latched onto a loose ball before cutting it back; as Fyfe shaped up to shoot Paterson stormed back to put in a fantastic challenge and clear the ball.

In the third minute of injury time Fyfe turned her marker before slotting home to make the final moments nervy for Farmington.

The hosts held on for all three points, however Motherwell felt they should have had a point when Kerry Montgomery sent an effort into the net but referee Vikki Robertson had started to blow for full time before she had started to shoot so the ‘goal’ rightfully would not have stood.

A deserved three points for Stevie Baxter’s side and their first of the season that lifts them up to sixth ahead of next week’s League Cup clash with Kilmarnock.