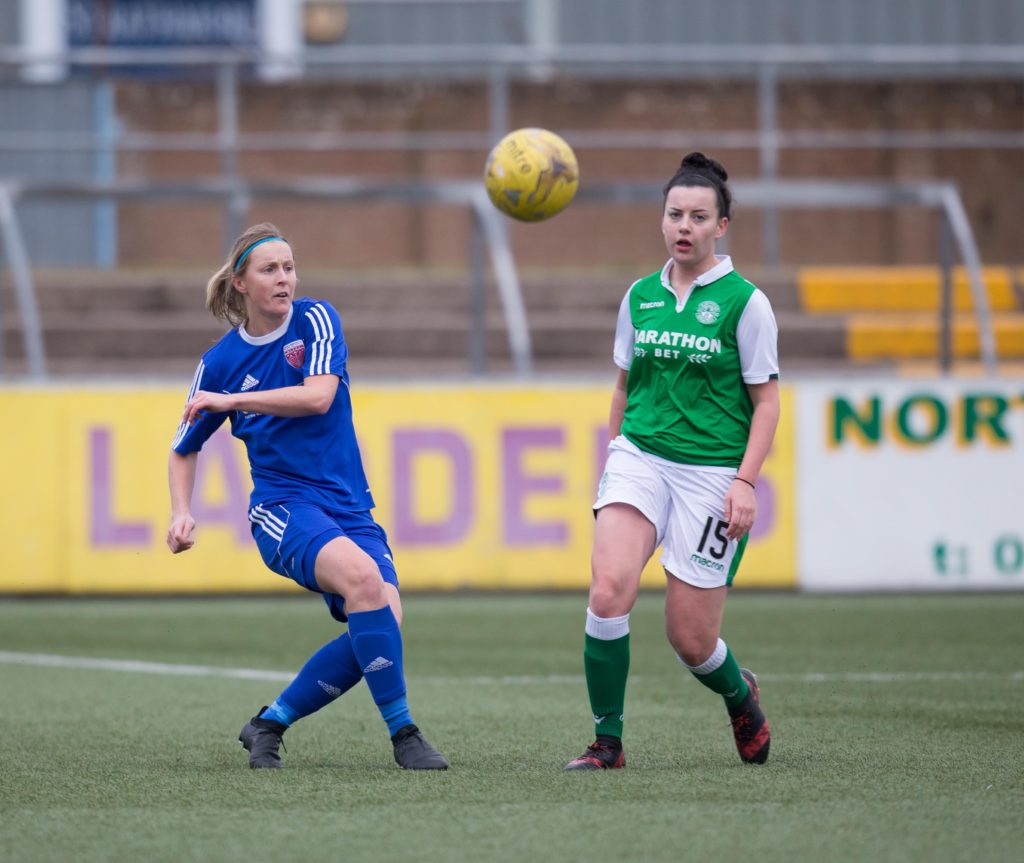 Forfar Farmington’s recent winning run in the SBSSWPL1 came to an end on Wednesday evening as title contenders Hibernian netted six without reply.

Goals from Rachel McLauchlan, Kirsten Reilly, Lizzie Arnot, Jamie-Lee Napier and an Abi Harrison double sealed the win for the hosts at Peffermill.

Farmington could have taken the lead just nine seconds in when Danni McGinley set up Caroline Heron, however the striker’s effort was held by Jenna Fife.

Hibs’ first chance fell to Kirsty Smith but she could only curl into Fiona McNicoll’s arms before Lizzie Arnot had a shot blocked shortly after.

The hosts took the lead after 20 minutes; Forfar looked to be creating an opportunity before the Hibs defence cleared and started a counter attack, ending in Rachel McLauchlan firing past McNicoll.

McNicoll parried a Harrison effort but it wasn’t long before the lead was doubled as Lisa Robertson’s cross found the unmarked Kirsten Reilly and she was more than happy to head home.

The Farmington keeper was in fine form, denying Robertson and Reilly while Harrison blasted over.

Heron came close for Farmington again as the game edged closer to half time; firing over after a cut back by winger Robyn Smith.

Arnot and Harrison were next to be stopped by McNicoll on the stroke of half time.

Following the break, McNicoll was forced into saves from Reilly, Robertson and Harrison but it wasn’t long until Hibs extended their lead.

Ten minutes into the second half a Reilly cross into the danger zone found Arnot who stroked the ball past the keeper.

A seven minute spell saw Hibs add a further three goals to their tally; the first came in the 71st minute when Harrison found the bottom corner of the net from close range.

Three minutes later Kirsty Smith made her way into the box before cutting the ball back for sub Jamie-Lee Napier to bundle into the back of the net.

The scoring was completed with twelve minutes remaining with Harrison grabbing her second following a run through the defence, completing a solo effort.

The hosts had chances to extend their lead late on but were unable to beat McNicoll again.

The result ends Farmington’s unbeaten run with another tough fixture to come before the summer break as Glasgow City visit Station Park on Sunday.