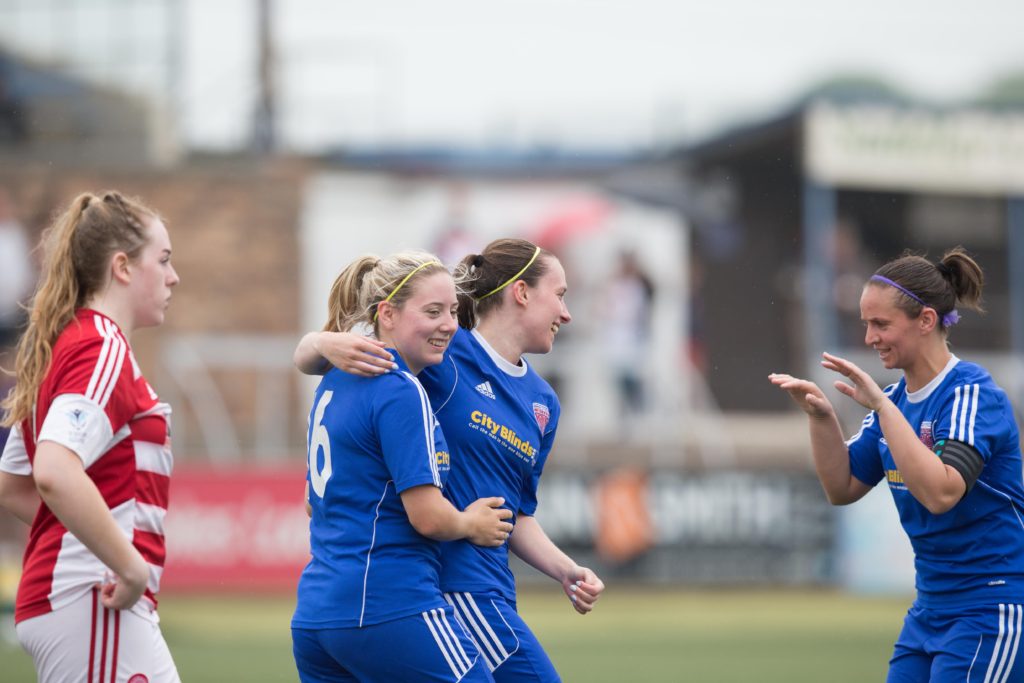 Forfar Farmington made it five wins from six games on Sunday and Robyn Smith reckons the side deserve to be where they are in the league.

Goals from Smith and Megan McCarthy sealed a 2-1 win at home to Hamilton in their first home game since mid-April as they moved to within two points of third placed Celtic.

The 25 year old winger feels results such as this are what’s needed in order to extend the gap between themselves and the relegation zone.

“I’m delighted with the result, we knew Sunday was a big game in terms of avoiding slipping down the table. These are the games we need to be coming away with the three points and we did just that.”

Smith grabbed the opening goal less than sixty seconds into the second half when she lobbed Lauren Grant and the former Jeanfield Swifts player believes it helped her improve on her first half performance.

“I thought I done away okay, there were a few errors and a few missed chances but I think I recovered from that in the second half. I knew chances wouldn’t come around often so I knew if I got another one it had to be hitting the back of the net and it did.”

This was Smith’s second goal of the season against Hamilton and having netted previously against them, she is high in confidence when it comes to facing the Accies.

“It certainly gives me a bit more confidence knowing I’ve scored against them before and to be honest, it was one of the first things I thought of after scoring, so I was delighted to see it hit the back of the net.”

It’s now four for the season for Smith, with a few assists alongside the goals; while she didn’t expect to have so many she is delighted with her contribution so far.

“If you told me at the start of the season I’d have scored four already and chipped in with a few assists, I’d have been delighted so I’m pleased to have contributed as much as I have so far.”

Farmington are now fourth in the league, thirteen points above the relegation zone and two points behind Celtic in third. The side were written off as relegation candidates at the start of the year but Smith feels the side deserve to be where they are in the league.

“At the start of the season our aim was always to stay up, especially being the team that’s just been promoted, but we’ve performed well and we deserve to be sitting where we are. Come the end of the season we will be delighted to be sitting in the top five, that way we are back amongst the established SWPL1 sides.”

The next three games leading up to the summer break will be a real test for Farmington with a league and cup double against Glasgow City either side of a midweek trip to Hibernian. Smith admits it will be challenging for the squad, however it’s a challenge the side will be relishing.

“If we perform at our best we can look to take points from the top teams. We were unlucky the last time we played City and we limited Hibs to scoring in the second half so we need to believe in ourselves.”

“We are under no illusions however, that Hibs and City are still unbeaten and challenging for the league so we will prepare well and look to put in a good performance on the day and see what happens come the end of the ninety minutes.”