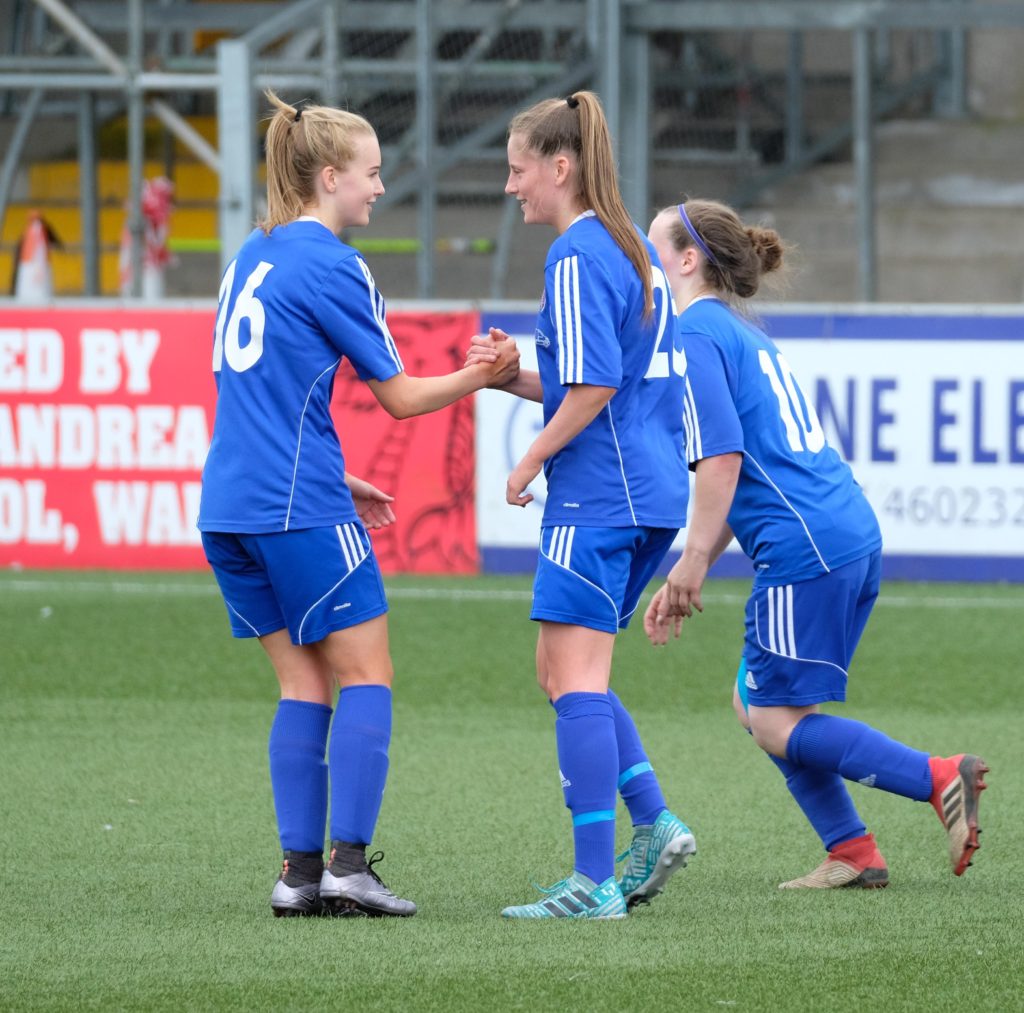 Forfar Farmington made it four wins from five in May with a comfortable 3-0 win at Ochilview over Stirling University on Wednesday night.

A goal in either half by Caroline Heron along with Megan Robb’s second goal since joining moved the side six points clear of the bottom half of the table.

With players missing through work commitments, Tammy Harkin and Megan Robb were drafted into the starting XI to replace captain Nicola Davidson and Beth McPherson.

The hosts almost got on to a perfect start just 30 seconds in as Orla King’s cross found Tegan Reynolds but her effort was easily held by Fiona McNicoll.

Three minutes later Farmington had their first chance as Tammy Harkin set up Caroline Heron on the edge of the box; her shot found the arms of Chloe Logan.

Danni McGinley combined with Megan Robb shortly after as the latter sent a cross in for Harkin, she controlled the ball before firing at the keeper.

At the other end Rebecca Galbraith latched onto a long ball, however her final effort failed to trouble McNicoll as she blasted over.

Heron and Kayleigh Brough were denied by Logan but it wasn’t long before the Stirling keeper was beaten. In the 21st minute Alana Bruce sent a fantastic cross from deep and Heron rose highest to head the ball into the back of the net via the post.

Farmington kept up their pressure following this with Cheryl Kilcoyne failing to find the target before Harkin hit the sidenetting.

On the stroke of half time the lead was doubled; Robyn Smith’s corner was sent into the box and Stirling failed to clear with Megan McCarthy knocking the ball down allowing Megan Robb to get the decisive touch as the assistant referee judged the ball had crossed the line.

It was much the same after the break as Mark Nisbet’s side hunted for a third goal and almost got it through Smith when her corner hit the bar with Logan beaten.

In the 51st minute Harkin tried her luck from distance, however her shot was going wide until Danni McGinley deflected it towards goal with Logan scrambling to collect it.

McGinley had a header from Bruce’s cross held while at the other end Reynolds had a tame shot find the arms of McNicoll.

It was almost three for Farmington in the 56th minute when Robb rattled the post, however she was ruled offside as she met Kilcoyne’s cross.

The attacker then headed wide from a McGinley cross before Smith sent a 30 yard free kick flying over the bar.

McGinley and Kilcoyne were close to adding a third but it finally came in the 76th minute when another Bruce cross found Heron and she was more than happy to bury the ball into the back of the net for her second and Farmington’s third.

This killed the game off and Farmington were more than happy to see the game out without really threatening the keeper in the final quarter of an hour.

The result sees Farmington move six points ahead of Rangers and consolidate their fourth place position after an impressive month.