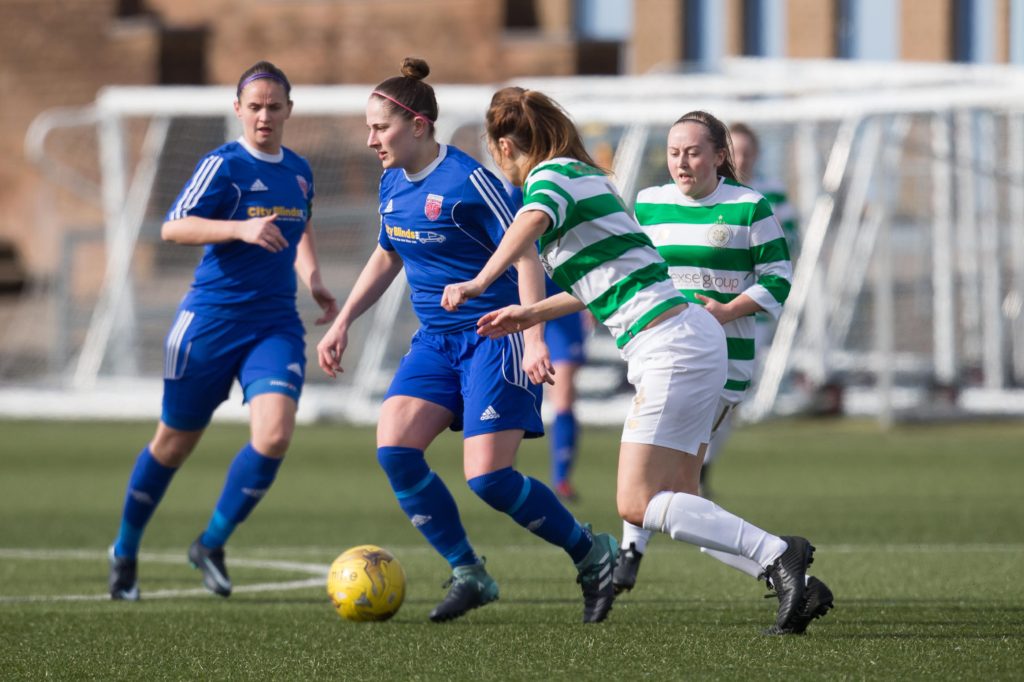 It’s Scottish Women’s Premier League Cup weekend and we travel to Falkirk Stadium for a 3.30pm kick off when we take on Celtic in the second semi final of the day on Sunday.

This is our first appearance at this level since 2013 where we lost to Glasgow City at Kiers Park, while Farmington have never made it to the final of this competition, Celtic will aim to make it to their second final in a row.

Farmington go into this tie on the back of Sunday’s tight defeat to Glasgow City meanwhile Celtic were defeated 3-1 at home to Hibernian.

Both sides have spent the majority of the cup campaign at home with only one away tie between them in the four games played.

Farmington started their competition with a comfortable 3-0 win at home to SWPL2 side Aberdeen.

Mark Nisbet’s side had numerous chances throughout the tie against the side they replaced in the top flight and went ahead through Cheryl Kilcoyne in the 36th minute.

Robyn Smith scored directly from a corner midway through the second half with Danni McGinley adding a third in injury time to complete a result that never looked in doubt.

Celtic also started their campaign with a heavy victory despite missing two penalties at home to St Johnstone.

Ruesha Littlejohn put the hosts ahead before half time and they could have gone further ahead shortly after the break, however Giard hit the post with her penalty.

Pullar added a second for Celtic before having a penalty of her own saved by stand in keeper Amy Henderson. The striker was involved with their final two goals, netting the third before setting up Richards for the fourth.

Farmington advanced to the semi finals with a 2-0 win over fellow SWPL1 side Stirling University with two first half goals.

Defence was the best form of attack for the side as Kayleigh Brough bundled the ball over the line from close range before Cassie Cowper added a second with a back post header shortly before the break.

Celtic also made it through to the semi finals with a 3-0 win away to Hamilton Accies. They broke the deadlock just before half time through German striker Josephine Giard as her headed home a Keeva Keenan cross.

Giard made it two after the break but Celtic missed their third penalty in the cup shortly after when Natalie Ross saw her spot kick saved by Lauren Grant. The scoring was completed late on through Rachel Donaldson with Keenan involved again.

We last met Celtic in the first round of last season’s tournament their K-Park facility in East Kilbride.

The hosts won the tie 1-0 as Natalie Ross scored the only goal midway through the first half on a cold February afternoon with Gemma Collier sent off late on for two bookable offences.

The majority of the team that day is still involved with the Premier League squad with just four of the eighteen no longer involved.

HOW TO GET TO FALKIRK STADIUM

The address for the stadium is as follows:

From Forfar, follow the A90 through Dundee towards Perth. When crossing the Friarton Bridge, continue following the M90 towards Edinburgh.

When continuing down the M90, you should take exit 4 signposted for Kinross and Kincardine. At the roundabout, take the third exit for Kincardine (A977) and follow this route.

This will take you to the Gartarry Roundabout, here you should take the second exit for the Kincardine Bridge and Clackmannanshire Bridge (A876).

Shortly after you will reach the Kilbagie Roundabout, please take the second exit signposted for Falkirk (A904). Continue along the A876, this will take you across the Clackmannanshire Bridge to the Higgins Neuk Roundabout.

Take the second exit, again signposted for Falkirk and follow the M876 before taking exit 7 for Falkirk (M9 South). Following the M9, you should then take exit 6 showing Falkirk (A905 (A904)).

After exiting at this roundabout, you will have arrived at the Falkirk Stadium. Parking is situated behind the south stand.

ENTRANCE TO THE STADIUM

Fans will be seated in the Main Stand and entrance for this game is £5 for adults with concessions entering for £2.

HOW TO WATCH THE GAME

If you are unable to come along and support Farmington, you can watch the game live on Youtube on the Scottish Women’s Football official channel:

Updates on the game will be available on Twitter, if you have not yet followed us, you can do so at @Farmington_FC.