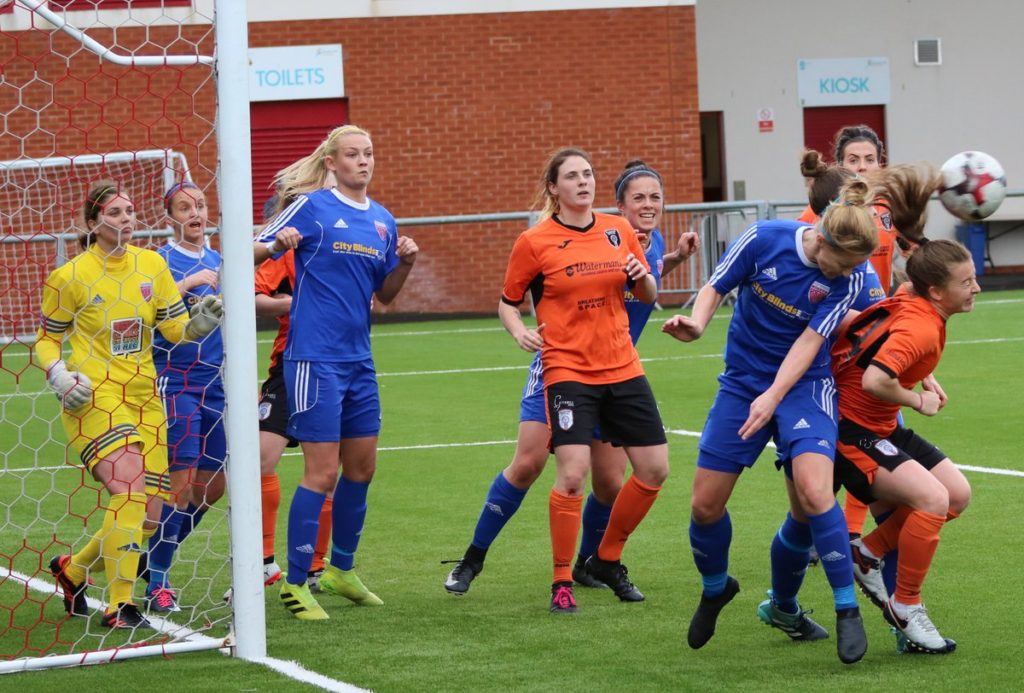 Forfar Farmington came so close to a late equaliser after a determined performance against Glasgow City.

After shutting them out for over 70 minutes, Christie Murray’s slice of luck gave City all three points but Farmington can take heart from the Petershill Park fixture.

Mark Nisbet made two changes from the defeat to Spartans with Tammy Harkin and City loanee Hannah Stewart replaced by Erin Cattanach and Kirsty Deans.

City came close in the opening sixty seconds as Kirsty Howat found the side netting with a fierce effort.

Just after the quarter hour mark the hosts started to create more chances but Farmington’s strong defence meant Leanne Ross, Howat and Sam Kerr all failed to find the target.

Ross almost broke the deadlock after 22 minutes with a fantastic free kick but Farmington stopper Fiona McNicoll tipped the set piece over the bar.

Two minutes later Ross hit the crossbar with another free kick, the rebound fell to Howat and she could only blaze her effort wildly over the bar.

The ball was in the net at the other end shortly after when Alana Bruce lobbed Lee Alexander, the referee pulling play back when she connected with it for being offside.

Bruce was involved with another Farmington attack in the 32nd minute as she set up Nicola Davidson, the captain’s long range strike held by Alexander.

Howat was denied by McNicoll as the game edged closer to half time after turning Megan McCarthy.

It was the same story for City after the break with Kerr’s header held by McNicoll before Donna Paterson sent a header off target from a Lauder cross.

Farmington’s spirits were heightened with the return of Caroline Heron in the 54th minute after missing the start of the season due to injury.

McNicoll pulled off another fantastic save on the hour mark with City hitting the bar shortly after for the second time.

The deadlock was broken with 18 minutes left; a ball towards the box resulted in McNicoll and Brough hesitating and when McNicoll attempted to clear her lines it hit Christie Murray and rolled into the empty net.

From kick off Forfar could have equalised when Robyn Smith sent McGinley through on goal; her shot was saved by the advancing Alexander, who seemed to take a knock as the ball hit her face.

This was the City keeper’s last action as she was forced off through injury for Erin Clachers.

As the game entered injury time Ross saw another free kick saved by McNicoll but the momentum seemed to change following this.

Caroline Heron saw her effort blocked by the City defence in the 92nd minute and just sixty seconds later Farmington could and should have equalised.

Nicola Davidson sent a cross into the box and after McGinley outmuscled a defender she slipped the ball past Clachers only to see it hit the base of the post; City cleared the ball as far as Smith, her first shot was blocked and she sent the rebound to the back post where Heron was waiting but she could only turn the ball agonisingly wide.

The final whistle went shortly after and despite the result, the players can all be proud of themselves after their performance at the home of the current champions ahead of next week’s SWPL Cup semi final against Celtic.