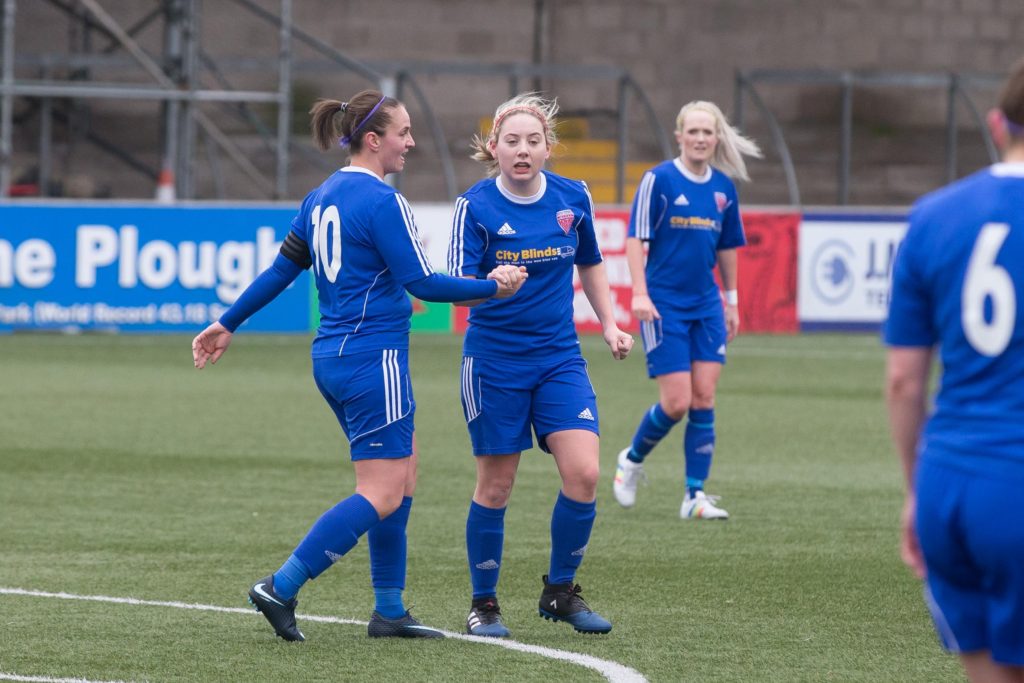 Cheryl Kilcoyne is pleased with how her teammates have started their return to the top flight and hopes they can continue their performances.

The side have won three out of their first five games in all competitons, keeping a clean sheet in every win and Kilcoyne reckons the side can continue to improve as the season progresses.

After last season’s SBSSWPL2 win, the versatile attacker admits this year is more challenging for the team but she is happy with the start made.

“I’m definitely happy with how we have started, especially as it is much more challenging than last season. We have had some good performances but there is still room for improvement. we will continue to work hard to improve our game and hopefully complete our goals for the season.”

The 23 year old has played in every game so far, netting once against Aberdeen in the Scottish Women’s Premier League Cup, and with this being her first full season in the top flight, she is keen to continue improving every week.

“I’m really enjoying the challenge so far and although I have played at all different levels over the years I’m definitely still gaining experience each week. I feel like my fitness has improved drastically this season but there’s weaknesses in other areas I’m keen to improve on. I hope to continue to contribute and maybe even grab a few more goals.”

Last season saw Farmington win the second tier of women’s football and reach the semi final of the Scottish Women’s Cup and the achievements have continued in 2018 as they made it to the semi finals of the SWPL Cup later this month.

Kilcoyne praised the team’s commitment and hard work on making it to a second semi final in six months.

“It’s definitely down to each individual involved with the team from coaching staff to players. We have worked hard together and set ourselves individual and team goals and reaching the semi final for the second year was one of them. We have been working on our strengths and weaknesses at training and it’s paying off and we are looking forward to the semi final.”

They will face Celtic at the Falkirk Stadium on April 29th and having faced them in a close defeat earlier this season Kilcoyne believes they can go one better.

“We definitely can improve and unfortunately it has been little mistakes that have cost us goals previously.  We will be determined to get a result from this game like any other game and a good performance and work rate should help us achieve that.”

In the close season head coach Mark Nisbet added three new faces with Sophie Milligan and Lindsey Dunbar also returning, Kilcoyne had no doubt in her mind that the quintet would gel with the group quickly, praising the club’s close knit community.

“Forfar Farmington has always been one of the most welcoming and family orientated clubs in Scotland so I had no doubt that the new faces would fit in and become part of the squad quickly. Everyone has adapted well and we are now more aware of each other’s strengths and they each have their own personalities which has really added to the squad.”