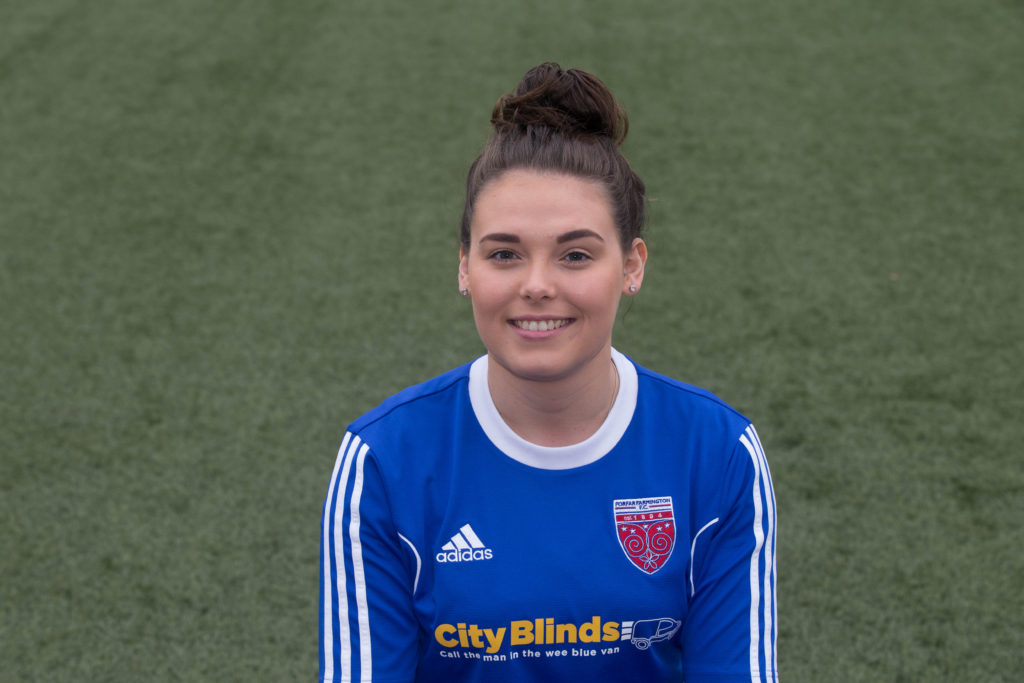 Sophie Milligan is frustrated with her slow recovery from a knee injury suffered just twenty minutes into her first game back at Forfar Farmington.

The 25 year old defender returned to the club after a year in Australia and after coming on as a sub against Hearts in mid-January, she was forced off after tearing her medial collateral ligament and cartilage in her left knee.

The original diagnosis for her injury was roughly six to eight weeks before a return to training but to the disappointment of Milligan, she was forced to delay her rehab, meaning she has only recently started running again.

“I originally thought I would be out of full training for about 6-8 weeks, but it took quite a long time for things to settle initially before I could properly get into rehab. I’m now at the stage that I am able to run but changing direction and such like are still an issue.”

Milligan suffered the injury midway through the second half after a 50/50 challenge and while she realised something wasn’t right, she was forced into another challenge while waiting to be subbed off which she fears may have aggravated it.

She said: “I went into a 50/50 challenge during the game and went down a bit awkwardly in what I thought was just a bad knock. I continued to play on but it just didn’t feel right when I was moving. Whilst waiting to be substituted I had to make another challenge which didn’t help. As it turned out, I had torn my medial collateral ligament and cartilage in my left knee.”

Milligan made 41 appearances during her previous spell at the club between 2014 and 2016 and although she is delighted to be back at Station Park, she is disappointed to pick up the injury in her first game.

“It’s extremely frustrating. We all put in so much work during preseason and for me to not even be on the park 20 minutes was a major blow. It’s not even just the case of having to rehab my knee, once I’m back to full training I’ll then have to get my fitness back.”

While the versatile defender is frustrated at not being able to get on the park, she praised her teammates and the backroom staff for keeping her involved and motivating her. Milligan has experience as a physiotherapist so she managed an appearance on the park against Celtic as she covered the physio role on the bench with regular sports therapist Emma Cuthill unavailable.

“Any time you’re not on the park it can be frustrating, but the staff and girls have been really good in keeping me involved and feeling part of the squad, I even managed a cameo appearance on the park against Celtic running the physio bag. When you’re at training doing runs on your own, it can be really disheartening but there’s always shouts from the girls encouraging you to keep going.”

Farmington are currently fifth in the league after three games, defeating Hamilton before losing out to Hibernian and Celtic. Despite the defeats, the side have performed well so far and the defender feels they are working hard to improve areas that need improved in training.

“We started off well winning the opening league game, but unfortunately in the past two games the results haven’t reflected our effort and performances. We’ve lacked concentration in areas on a couple of occasions that have cost us, but it is something we have identified and are working on in training.”

Milligan was disappointed to see Sunday’s fixture at Stirling University cancelled following heavy snow in the central region and feels it may be difficult with the likelihood of it being rearranged during a midweek.

“The girls were prepared and really up for the game so it is disappointing for it to be cancelled, especially as it will probably be rescheduled as a midweek fixture, which can make it difficult with work and education commitments, but we will go into the game with the same preparation and aim.”

The side don’t have to wait long to battle Stirling as they face them this Sunday for a place in the semi final of the Scottish Women’s Premier League Cup. Milligan believes the postponed fixture won’t affect how they approach the game and reckons it’s a bonus to be drawn at home.

“We were going into last weekend’s fixture against Stirling looking for the win, so it doesn’t change the way we will approach the cup game.”

She continued: “Being drawn at home is definitely a bonus in that it’s your park that you are comfortable on and train on each week. You also have the same routine and preparation for each home game, which means we just need to concentrate on our performance. We always go into each game with the same intensity, regardless of whether it’s home or away.”

Farmington’s quarter final against Stirling University this Sunday is a 1pm kick off at Station Park, admission is £4 for adults and U16’s enter free of charge.