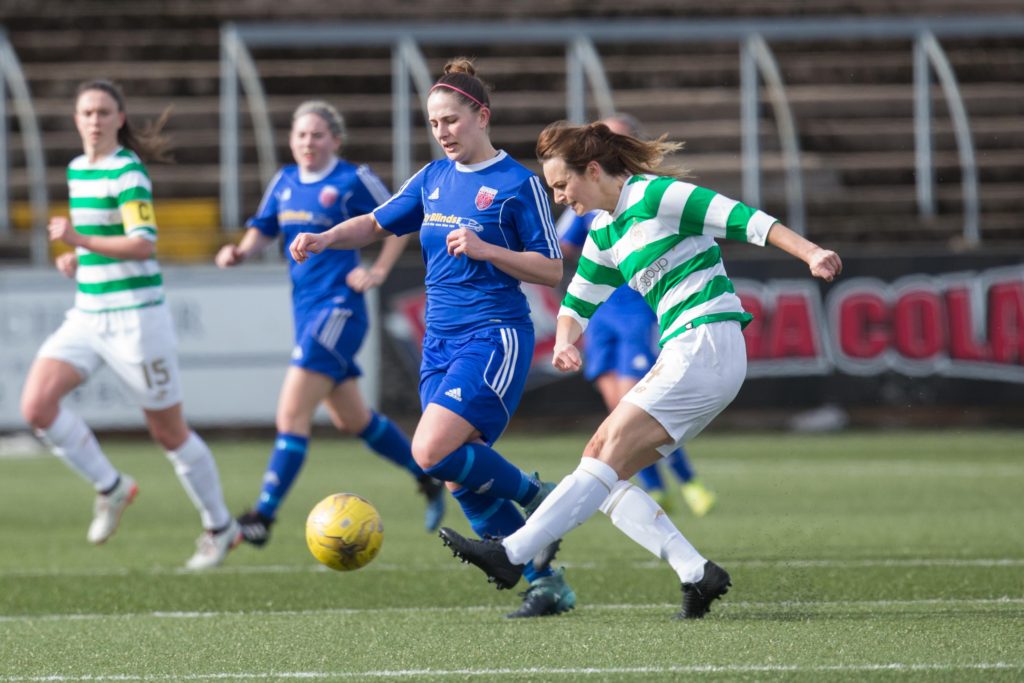 Forfar Farmington fell to their second defeat of the season in a tight 2-0 loss at home to Celtic.

After a goalless first half, Claire Adams’ fantastic long range effort and Kelly Clark sealed the three points for the visitors.

Farmington were looking to build on their deserved cup win over Aberdeen and had the first chance of the game as Megan McCarthy failed to send her header on target from a Cassie Cowper cross in the 8th minute.

Three minutes later McCarthy did well to stop Josephine Giard from getting a shot away while Danni McGinley’s low effort was held by Megan Cunningham at the other end.

Kayleigh Brough thought she had a great chance to open the scoring in the 21st minute when Kirsty Deans’ shot fell to her feet but she was adjudged to be offside.

Fiona McNicoll kept the scores level just before the half hour mark with a couple of phenomenal saves; both Giard and Heather Richards failing to beat the stopper.

Cheryl Kilcoyne saw her effort blocked by the visiting defence before McNicoll pulled off another great save from Giard to keep the scores level.

Both sides came out looking to break the deadlock after half time and Celtic came close as Clark headed over from a Richards free kick.

They went one better in the 61st minute; Claire Adams sending a 25 yard effort into the top corner past McNicoll.

Nicole Pullar was stopped by McNicoll once again six minutes later before McCarthy nodded wide from a Julia Scott corner.

The lead was doubled with eleven minutes left; Richards’ corner was swept home at the back post by former Farmington midfielder Clark.

Celtic could have had a third deep into injury time but McNicoll was in fine form to tip the ball over the bar.

With Farmington missing out on points for the second league game in a row, they will look to bounce back next week as they take on Stirling University.