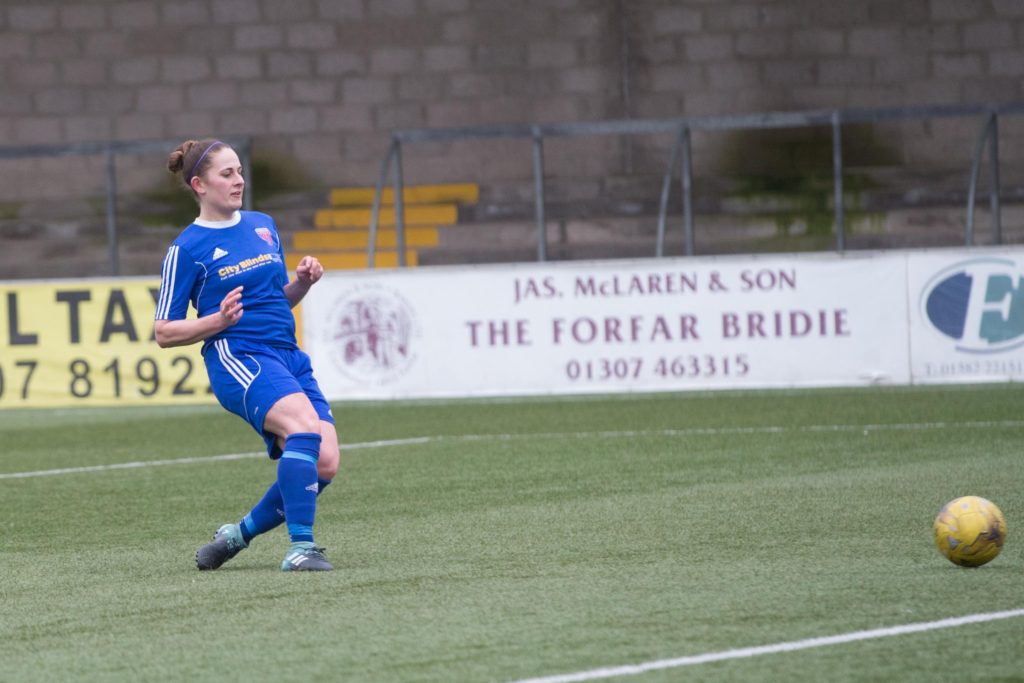 Danni McGinley was delighted to get off the mark for the season after netting the third in Forfar Farmington’s win last weekend.

Farmington defeated Aberdeen 3-0 in the first round of the Scottish Women’s Premier League Cup with McGinley netting the third deep into injury time to round off a good performance from the side.

The 23 year old striker felt the side performed well and reckons the clean sheet was well deserved for Fiona McNicoll after her recent form, however the keeper was rarely tested by the Dons on Sunday.

“Overall I think the victory was a good one, we scored three goals and didn’t concede.  It’s always tough playing teams where there’s a bit of rivalry as everyone steps up.  Keeping a clean sheet is always important for us and I think it’s very well deserved for Fiona who has been brilliant for us recently.”

McGinley admitted she felt like she hadn’t played to the best of her abilities but was happy to get involved with the goals with the third goal and an assist from setting up Cheryl Kilcoyne for the opener.

She said: “I don’t feel like I played my best game from a personal perspective, but I persevered and got my reward right at the end.  It’s always nice to be involved in the goals whether it be scoring or assisting.”

The goal was McGinley’s first of the season, taking her to sixteen goal in nineteen appearances since joining in June last season, and the former Jeanfield Swifts attacker reckons it’s easy to be hard on yourself when you don’t score.

“I’m pleased to get off the mark, as a striker I think it’s easy to be hard on yourself when you’re not scoring.  Having scored a couple in preseason I was just waiting for my chances in our competitive games.”

The side have won two of their first three games this season, keeping two clean sheets; McGinley believes the side have more to give which will only help them improve further.

“I don’t think we could’ve asked for much more at the start of the season. I definitely think that we have more to give as a team, but there’s a good vibe at the club just now and that always helps.”

With an international break this weekend, Celtic are the visitors to Station Park next Sunday. While many would write off Farmington, McGinley feels they are confident going into the encounter.

“We have a lot of confidence going into this fixture, we are under no illusions that Celtic are a good side but I think we can match them and make it an exciting encounter.”