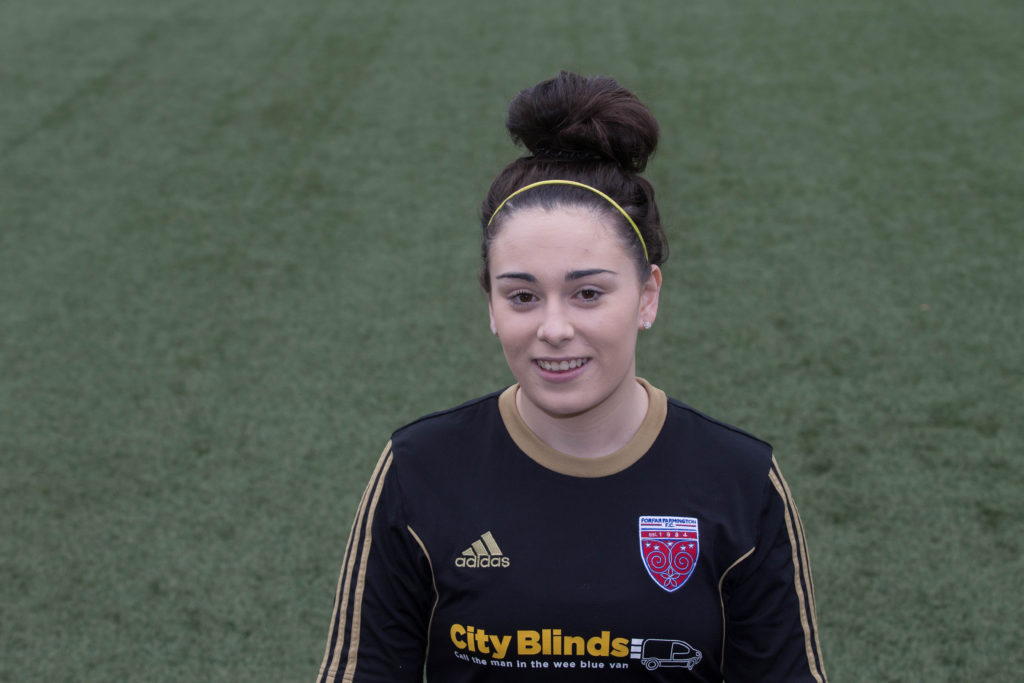 Chantelle McKay is confident that Forfar Farmington are ready for the season ahead after a testing pre-season schedule.

The 21 year old goalkeeper is also looking forward to her first season at the top level of women’s football, hoping to battle Fiona McNicoll for the number one spot.

Farmington played three games against Hearts, Hibernian and Rangers and McKay reckons the last few weeks have gone as expected and have prepared the side for the new season.

“Pre-season has gone as we all expected, I think challenging but enjoyable for everyone, including the new players coming in it’s all mainly been about game time and adapting to the changes that we’re going to be facing. Each game has been totally different and has given us a little taster of what to expect in these next few months in the SWPL1.”

McKay continued: “Our game against Hibs was all about seeing what the top standard was all about and how we have to go around competing against the best; I feel like we are prepared and have a strong stable group going forward which will help us compete at the top level.”

The opening fixture of the season sees Mark Nisbet’s side travel to Hamilton Academical this Sunday; McKay feels the match between the 2016 & 2017 SBSSWPL2 champions is an excellent way to kick off the campaign.

“Our first fixture away to Hamilton is going to be tough but a good challenge for us. With them winning the SWPL2 two seasons ago and ourselves last season it should be an exciting game. We would obviously love to start our league campaign with a win.”

“All preparations for this game will start in training this week and we will hopefully come away with the three points setting us on the way to achieving our season long goal of staying in the league.”

The former Tayside keeper played three times last season; with this being her first season in the top flight, she is eager to gain experience. Fiona McNicoll stands in her way as the current number one, however McKay hopes to keep improving herself and gain more game time.

“I’m looking forward to this season, mainly for the experience as I haven’t seen much football at the top level throughout my career. Fiona is an excellent keeper and works hard every week, I can only try my best to keep up with her and her standards to better myself and build my confidence to allow myself to have any chance of getting some more game time.”

2017 was McKay’s first year at the club and she still believes that moving to Station Park was one of the best decisions she has ever made.

“Moving to Forfar has been one of the best decisions I’ve made in my whole life. Since joining Forfar I’ve enjoyed my football so much more, I’ve gained so much more knowledge and understanding of the game and I have become a much fitter person in general. I’m looking forward to another season at the club.”

Mark Nisbet has added Sophie Milligan, Hannah Stewart, Tammy Harkin and Cassie Cowper to his squad during the close season with McKay impressed by the quartet so far.

“All four girls have been excellent, they’ve came in, settled down and have done what’s been asked of them. They are all pretty versatile so have fitted in with the group well and gave us that extra boost that we needed after losing a few faces at the end of the season.”

“As a new player to the squad last season I know how difficult it is to join a new team but Forfar is a friendly club who have a great bunch of girls which they’ve been made to feel part of.”